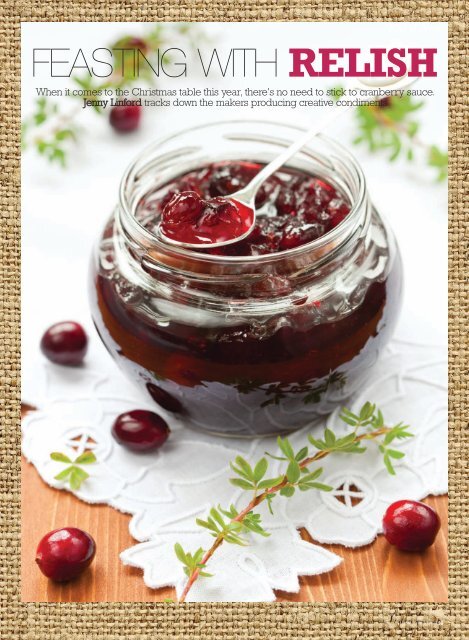 When it comes to the Christmas table this year, there's no need to stick to cranberry sauce.

“I just want to source the best I can, give

generously in jar and make something that

people want to come back to”

Across Britain, people are lovingly

which to liven up your festive

staples from roast turkey to

Boxing Day ham. The sources of

inspiration for these preservers include a sense of

history, a love of nature and foraging, patriotic

pride and the landscape around them.

In the picturesque village of Hawkshead,

Cumbria, Maria and Mark Whitehead of the

Hawkshead Relish Company are noted for their

flavourful and imaginative preserves such as their

Nettle Jelly, which this year bagged a Gold Great

The reason the Whiteheads began making

preserves 11 years ago is a dramatic one. They

were running their busy, successful café in

tourists, when the 2001 foot and mouth disease

“It was a Sunday night,” remembers Maria, “and

we heard the news and thought ‘Oh, that’s not

good for farmers’. We opened up on Monday

morning and nobody came to the café. People

listened to the government’s warnings and stayed

away from the countryside. I think we served just

one cup of tea all day.”

Faced with the urgent need to find another way

to raise revenue, the couple decided to start

making preserves – which Mark had been making

on a small scale to serve in their café – and sell

them to shops. Today, they produce around 130

preserves and their former café is now a

Hawkshead Relish shop, stocked to the brim with

jars of assorted jams, chutneys and pickles and

complete with tasting tables for customers.

“Mark’s got a brilliant ability to put flavours

together,” explains Maria. “Also, what’s dear to his

heart is the terroir principle – the idea that

something which grows together goes together.

“The nettle jelly is a good example of this. A

friend of ours who was farming goat wanted a

product which would go with roast goat meat.

Mark thought mint jelly would be nice and asked

him what the goats ate. He said, ‘Oh, they’re

fantastic- they eat all my nettles,’ at which point

Mark had his brainwave of making nettle jelly. We

pick the young nettles in the spring to make it and

it’s very fresh, with a gooseberry note to it.”

A personal favourite of Maria’s is their pickled

damsons, made from locally-grown fruit. “Damsons

grow here, so are the ultimate local product. They

have such a depth of rich flavour. A spoonful of

pickled damsons with your Christmas turkey or

goose is lovely. For me, it wouldn’t be Christmas

without my pickled damsons!”

When Elspeth Bilstoft of Rosebud Preserves,

1989 she was prompted by both her love of the

countryside and a desire to keep country

“I was brought up in Swaledale – a very lovely

part of the world. My father was very much a

countryman and he gave me this love of nature. I

remember that I would sit on his shoulders as a

little girl, while he walked for miles in the

‘brambles’ in the north [blackberries]. I was making

crab apple jelly as a teenager!”

Appropriately, the first product that Elspeth

made for Rosebud Preserves was her crab apple

fashionable - has long been at the heart of her

“I used wild crab apples – they have such a

lovely flavour – picking them from hedgerows. I

had them staked out on various farms! They

berries for my rowan jelly is laborious. Nowadays

you can buy them commercially, but for most of

the time I’ve been making preserves you couldn’t,

you had to pick them.”

For Elspeth, the key to making good-quality

preserves is taking care at every step of the way,

from sourcing and preparation to cooking. “I use

very careful not to put in too much moisture.

“When I’m making chutneys, I don’t cook them

down so much that you don’t recognise the

individual things that are in there. It’s not

complicated. I just want to source the best I can,

give generously in jar and make something that

people want to come back to.”

Gloucestershire began her business in 1989 making

blackberry and apple jam at home. “It would have

been great to have launched the business at a

farmers’ market, but they didn’t exist back then!”

Over the years she’s noticed the changing trends

in the world of preserves. “Things have almost

gone full circle,” she points out, “The English

gooseberries were out of fashion for a while, but

now there’s a demand for them.”

“I think chutneys are enjoying something of a

of them as something to have with bread and

cheese. You can use them in so many different

ways in cooking; it’s a quick, shortcut way of

adding flavour to a dish.

“One of my favourites at Christmas is our sweet,

sticky Fig and Plum Relish. You can use that to

great effect in dishes – add it to a lamb tagine to

give flavour or I like it spread on puff pastry with

cheese crumbled over, so that you get the contrast

between the sweetness and saltiness.”

In the heart of Northamptonshire, Camille

shop with her innovative preserving business, The

Pickled Village. “I bought this lovely little shop in

the beautiful, idyllic village of Bulwick and I live in

the shop as well as work here.

“Having a village shop is so important for the

in order for the shop to survive it needed to have

something different and quirky, so I set up The

Pickled Village. Now we get people coming from all

over the country to visit us. I love meeting people

Camille’s Spanish and Italian heritage, as well as

her time living in the Caribbean, have influenced

the preserves she makes. “My bestselling product

is the Red Rapscallion – made from red onions,

redcurrants, fresh thyme and chillies. It has a nice

chilli bite to it and that outsells everything else.”

This summer, inspired by the Olympics, she

which has been so popular she’s keeping it on. “We

have a tasting table in the shop and people come in

for their bacon rolls and have a taste. The things

that are unusual and fiery are the ones that do the

best. People are very adventurous now when it

comes to what they eat.”

Taste of the Wild

Living on a hillside farm in Herefordshire, Liz

Knight’s passion for British heritage and the

“notion of capturing the essence of a season or a

place in a bottle or jar” inspired her to set up

An important source of inspiration for setting up

her ‘cottage industry’ was Liz’s previous job in a

day centre. “I’d worked for a number of years with

they made their own butter, preserved herbs, used

spices. It was fascinating and I learnt so much.”

As the name suggests, foraging is at the heart of

much a supermarket’s worth of ingredients there!”

“If you work with the seasons, what nature takes

away with one hand, it gives with the other, so

although there are barely any damsons this year,

the rose hips are amazing. I turn those into a

spiced rose hip mulling syrup, based on a medieval

spiced syrup which would have been made using

spices brought back by the Crusaders combined

with a rose hip syrup.”

version of Worcestershire sauce made from dried

elderberries, spices and cider vinegar”. For

Juniper savoury conserve . “It’s all things that grow in

the same environment and a lovely little herb called

approach to making it where you take what’s

plentiful at a particular time of year and preserve

it.” This year’s Liz’s mincemeat is made from

“You can turn a jar of that into your Christmas

cake or your Christmas pudding or, of course, you

can use it to make mince pies. What I’m offering

with Forage Fine Foods is a mixture of made and

picked and inspired,” Liz laughs, “I suppose in my

Eat it Now FEASTING WITH RELISH When it comes to the Christmas table this year, there's no need to stick to cranberry sauce. <strong>Jenny</strong> <strong>Linford</strong> tracks down the makers producing creative condiments Great British Food 59 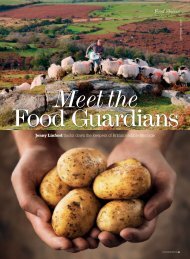 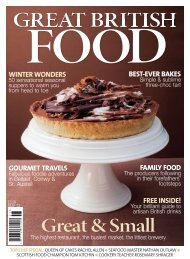 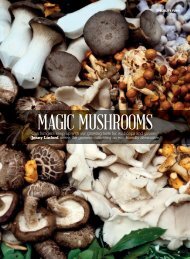 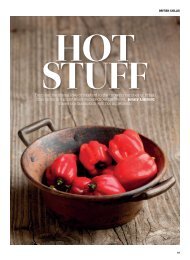 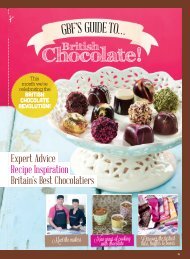 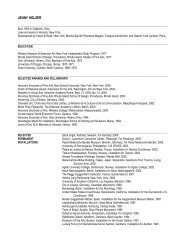 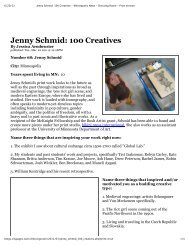 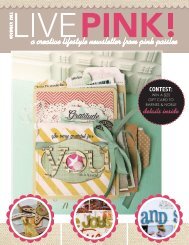