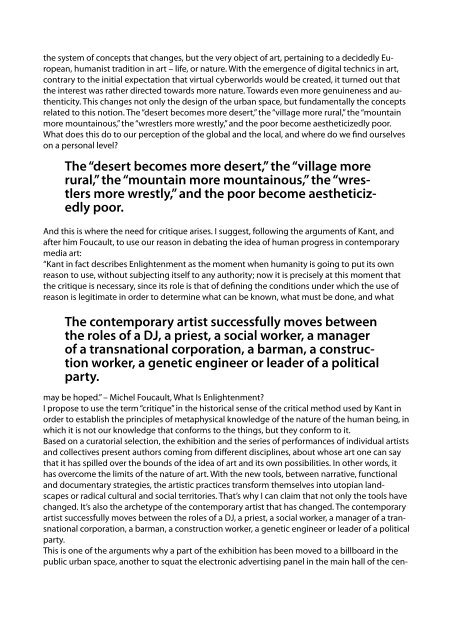 the system of concepts that changes, but the very object of art, pertaining to a decidedly European,

humanist tradition in art – life, or nature. With the emergence of digital technics in art,

contrary to the initial expectation that virtual cyberworlds would be created, it turned out that

the interest was rather directed towards more nature. Towards even more genuineness and authenticity.

This changes not only the design of the urban space, but fundamentally the concepts

related to this notion. The “desert becomes more desert,” the “village more rural,” the “mountain

What does this do to our perception of the global and the local, and where do we fi nd ourselves

on a personal level?

And this is where the need for critique arises. I suggest, following the arguments of Kant, and

after him Foucault, to use our reason in debating the idea of human progress in contemporary

reason to use, without subjecting itself to any authority; now it is precisely at this moment that

the critique is necessary, since its role is that of defi ning the conditions under which the use of

reason is legitimate in order to determine what can be known, what must be done, and what

The contemporary artist successfully moves between

the roles of a DJ, a priest, a social worker, a manager

of a transnational corporation, a barman, a construction

worker, a genetic engineer or leader of a political

may be hoped.” – Michel Foucault, What Is Enlightenment?

order to establish the principles of metaphysical knowledge of the nature of the human being, in

which it is not our knowledge that conforms to the things, but they conform to it.

Based on a curatorial selection, the exhibition and the series of performances of individual artists

and collectives present authors coming from diff erent disciplines, about whose art one can say

that it has spilled over the bounds of the idea of art and its own possibilities. In other words, it

has overcome the limits of the nature of art. With the new tools, between narrative, functional

and documentary strategies, the artistic practices transform themselves into utopian landscapes

or radical cultural and social territories. That’s why I can claim that not only the tools have

artist successfully moves between the roles of a DJ, a priest, a social worker, a manager of a transnational

corporation, a barman, a construction worker, a genetic engineer or leader of a political

public urban space, another to squat the electronic advertising panel in the main hall of the cen- 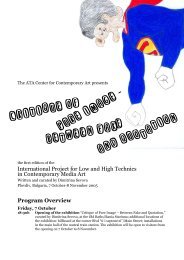