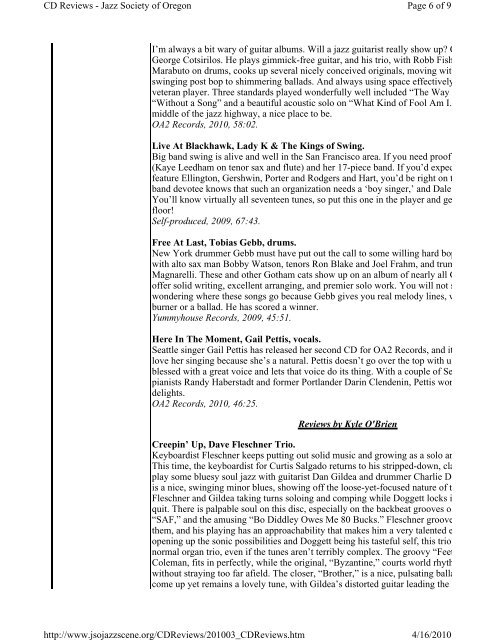 I’m always a bit wary of guitar albums. Will a jazz guitarist really show up? C

George Cotsirilos. He plays gimmick-free guitar, and his trio, with Robb Fish

“Without a Song” and a beautiful acoustic solo on “What Kind of Fool Am I.

middle of the jazz highway, a nice place to be.

Live At Blackhawk, Lady K & The Kings of Swing.

Big band swing is alive and well in the San Francisco area. If you need proof

(Kaye Leedham on tenor sax and flute) and her 17-piece band. If you’d expec

feature Ellington, Gershwin, Porter and Rodgers and Hart, you’d be right on t

band devotee knows that such an organization needs a ‘boy singer,’ and Dale

You’ll know virtually all seventeen tunes, so put this one in the player and ge

Magnarelli. These and other Gotham cats show up on an album of nearly all G

offer solid writing, excellent arranging, and premier solo work. You will not s

wondering where these songs go because Gebb gives you real melody lines, w

burner or a ballad. He has scored a winner.

Seattle singer Gail Pettis has released her second CD for OA2 Records, and it

love her singing because she’s a natural. Pettis doesn’t go over the top with u

blessed with a great voice and lets that voice do its thing. With a couple of Se

This time, the keyboardist for Curtis Salgado returns to his stripped-down, cla

is a nice, swinging minor blues, showing off the loose-yet-focused nature of t

quit. There is palpable soul on this disc, especially on the backbeat grooves o

them, and his playing has an approachability that makes him a very talented e

opening up the sonic possibilities and Doggett being his tasteful self, this trio

normal organ trio, even if the tunes aren’t terribly complex. The groovy “Feet

without straying too far afield. The closer, “Brother,” is a nice, pulsating balla

come up yet remains a lovely tune, with Gildea’s distorted guitar leading the