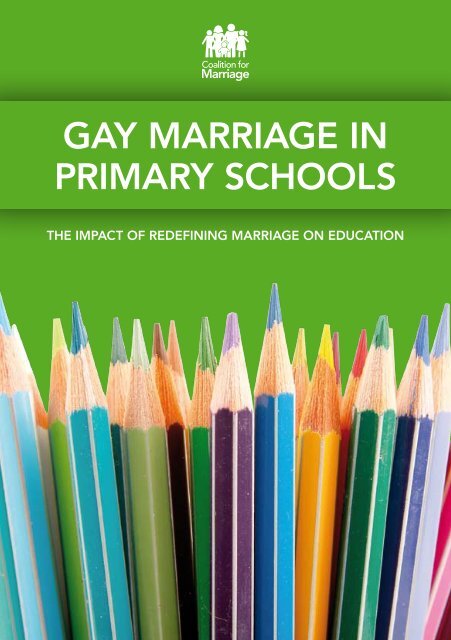 THE IMPACT Of REdEfINING MARRIAGE ON EduCATION

If the legal definition of marriage changes, there will be huge political

pressure to make sure the new definition is taught within schools.

Already, gay pressure groups have drawn up lists of recommended

books for schools to use with pupils. This report contains extracts

from some of the materials recommended for use in primary schools

Not only will there be political pressure, there will also be a legal

requirement to teach about same-sex marriage. Section 403(1A)(a) of

“issue guidance” to ensure that pupils “learn the nature of marriage

If the legal definition of marriage changes, the law will require

that children learn about gay marriage as part of sex education. Sex

education is mandatory in secondary schools. Many primary schools

also choose to teach sex education in some form. Wherever the

subject is taught, the law requiring teaching about the importance of

Worryingly, when the Home Office launched the consultation on

redefining marriage they were not aware of the implications of this

law. 1 Even months after the consultation had concluded, an Education

Minister confirmed that the department was still not sure how the

QC confirms that schools would be under an obligation to teach

children about gay marriage within sex education. In addition, if gay

marriage is taught within schools outside sex education, Mr O’Neill

legal right to withdraw children from such lessons.

The same advice also shows that a school could take disciplinary

action against a teacher who, for reasons of conscience or belief,

asked not to be required to promote gay marriage within the school.

It seems inescapable that if same-sex marriage is legalised many

teachers will refuse to teach it to their pupils, triggering scores of

expensive and divisive court cases and souring relations both in

staffrooms and between schools and parents.

of recommended resources drawn up by Stonewall. A teacher training

children could perform some of the storybooks as school plays.

with support from the taxpayer-funded Training and Development

Agency for Schools, suggests that pupils must become “resilient” to

the values of their parents and grandparents. This is in reference to

some parents and grandparents who may have objections to issues

such as gay marriage.

In 2009, Muslim and Christian parents in Waltham Forest, East

London, were threatened with prosecution for withdrawing their

children from primary schools lessons that used the gay marriage

withdrawals were “unauthorised” absences and that action would be

taken against the parents.

In the US state of California, gay marriage was briefly legalised in 2008

following a ruling by the courts. Shortly after, a group of 18 first-grade

Gay marriage was legalised in the US state of Massachusetts in

legal action against the school district of their children’s elementary

school. A teacher in a second-grade class (children aged 7 to 8) had

used the King & King storybook, in which a prince marries another

prince in a gay wedding. The parents said the book’s themes were not

appropriate for their children’s age, and that using the book without

their consent was a violation of their civil rights. But judges in a federal

appeal court ruled against the parents and sided with the school.

The redefinition of marriage is a policy proposal with society-wide

implications. Its impact will be widespread, because marriage itself

is widespread. Marriage is woven into the laws, culture and language

of our everyday lives. This includes what is taught to our children by

teachers in our schools.

MOM ANd MuM ARE

dAd dAvId, BABA CHRIS ANd ME

JOSH ANd JAz HAvE THREE MuMS

dAddY, PAPA, ANd ME

MOMMY, MAMA, ANd ME

EMMA ANd MEESHA MY BOY

Coalition for Marriage Limited is a Not-for-Profit Company registered in England. Company No. 07880604.