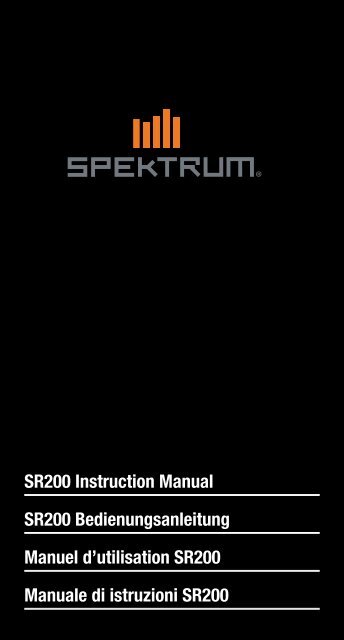 All instructions, warranties and other collateral documents are subject to

change at the sole discretion of Horizon Hobby, Inc. For up-to-date product

literature, visit horizonhobby.com and click on the support tab for this

The following terms are used throughout the product literature to indicate

various levels of potential harm when operating this product:

NOTICE: Procedures, which if not properly followed, create a possibility

of physical property damage AND a little or no possibility of injury.

CAUTION: Procedures, which if not properly followed, create the probability

of physical property damage AND a possibility of serious injury.

WARNING: Procedures, which if not properly followed, create the probability

of property damage, collateral damage, and serious injury OR create a high

WARNING: Read the ENTIRE instruction manual to become familiar with

the features of the product before operating. Failure to operate the product

correctly can result in damage to the product, personal property and cause

This is a sophisticated hobby product. It must be operated with caution and

to the product or other property. This product is not intended for use by

children without direct adult supervision. Do not attempt disassembly, use with

incompatible components or augment product in any way without the approval

and maintenance. It is essential to read and follow all the instructions and

warnings in the manual, prior to assembly, setup or use, in order to operate

Thank you for purchasing a genuine Spektrum product. Always purchase

with regards, but not limited to, compatibility and performance of counterfeit

products or products claiming compatibility with DSM or Spektrum technology.

Age Recommendation: Not for children under 14 years.

This is not a toy.

NOTICE: This product is only intended for use with unmanned, hobby-grade,

will hold the receiver in place and help isolate it from vibrations. Mount the antenna up and

away from the vehicle in an antenna tube. The higher up the antenna is, the better signal

NOTICE: Do not cut the antenna.

In order to operate, the receiver must be bound to the transmitter. Binding is the process of

specific transmitter. When a receiver is bound to a transmitter/model memory, the receiver

will only respond to that specific transmitter/model memory.

2. Power the receiver through any port. If an ESC is being used, power on the ESC with the ESC

that the receiver is in bind mode.

Powering the receiver with a separate receiver pack

Powering the receiver with an ESC

3. With the steering wheel, throttle trigger and Aux channel (if applicable) in the desired preset

until the binding process is complete. Please see the next section for more information

4. The LED on the receiver should now be solid, indicating a successful bind has taken place.

5. Once the bind process is complete and before power is cycled on the receiver, remove the

bind plug and store it in a convenient place. Failure to remove the bind plug will result in the

receiver going back into bind mode.

The only time it is necessary to do a rebind is if different failsafe positions are desired e.g.,

servo travel has been reversed after the initial bind, or if the receiver is to be bound to a

Failsafe positions are set during binding. In the unlikely event that the radio link is lost during use,

and straight steering). If the receiver is turned on prior to turning on the transmitter, the receiver

will enter failsafe mode, driving the servos to their preset failsafe positions. When the transmitter

is turned on, normal control is resumed.

The system will not

Your transmitter and receiver

are too close together

You are around metal

The model selected is not

the model bound to

mode and is no longer

bound to your receiver

Move to an area with less metal

you are bound to

into failsafe mode a

to be sure it is not cut or

Make sure your receiver antenna

is in an antenna tube and is

to operate. An inadequate power

supply can allow voltage to

and cause the receiver

to brown out and reconnect

Check the wires and

connection between the battery

and receiver. Repair or replace

What this Warranty Covers

Horizon Hobby, Inc., (Horizon) warrants to the original purchaser that the product

period of 1 years from the date of purchase.

What is Not Covered

This warranty is not transferable and does not cover (i) cosmetic damage, (ii) damage due

to acts of God, accident, misuse, abuse, negligence, commercial use, or due to improper

use, installation, operation or maintenance, (iii) modification of or to any part of the

Product, (iv) attempted service by anyone other than a Horizon Hobby authorized service

center, or (v) Products not purchased from an authorized Horizon dealer.

OTHER THAN THE EXPRESS WARRANTY ABOVE, HORIZON MAKES NO OTHER WARRANTY

OR REPRESENTATION, AND HEREBY DISCLAIMS ANY AND ALL IMPLIED WARRANTIES,

INCLUDING, WITHOUT LIMITATION, THE IMPLIED WARRANTIES OF NON-INFRINGEMENT,

MERCHANTABILITY AND FITNESS FOR A PARTICULAR PURPOSE. THE PURCHASER

ACKNOWLEDGES THAT THEY ALONE HAVE DETERMINED THAT THE PRODUCT WILL

SUITABLY MEET THE REQUIREMENTS OF THE PURCHASER’S INTENDED USE.

will, at its option, either (i) service, or (ii) replace, any Product determined by Horizon to

be defective. Horizon reserves the right to inspect any and all Product(s) involved in a

warranty claim. Service or replacement decisions are at the sole discretion of Horizon.

Proof of purchase is required for all warranty claims. SERVICE OR REPLACEMENT AS

PROVIDED UNDER THIS WARRANTY IS THE PURCHASER’S SOLE AND EXCLUSIVE REMEDY.

HORIZON SHALL NOT BE LIABLE FOR SPECIAL, INDIRECT, INCIDENTAL OR

CONSEQUENTIAL DAMAGES, LOSS OF PROFITS OR PRODUCTION OR COMMERCIAL

LOSS IN ANY WAY, REGARDLESS OF WHETHER SUCH CLAIM IS BASED IN CONTRACT,

WARRANTY, TORT, NEGLIGENCE, STRICT LIABILITY OR ANY OTHER THEORY OF LIABILITY,

EVEN IF HORIZON HAS BEEN ADVISED OF THE POSSIBILITY OF SUCH DAMAGES. Further,

liability is asserted. As Horizon has no control over use, setup, final assembly, modification

or misuse, no liability shall be assumed nor accepted for any resulting damage or injury.

By the act of use, setup or assembly, the user accepts all resulting liability. If you as the

Product, purchaser is advised to return the Product immediately in new and unused

condition to the place of purchase.

These terms are governed by Illinois law (without regard to conflict of law principals).

This warranty gives you specific legal rights, and you may also have other rights which

vary from state to state. Horizon reserves the right to change or modify this warranty

at any time without notice.

service. Once assembly, setup or use of the Product has been started, you must contact

your local distributor or Horizon directly. This will enable Horizon to better answer your

questions and service you in the event that you may need any assistance. For questions

or assistance, please direct your email to productsupport@horizonhobby.com, or call

If this Product needs to be inspected or serviced, please use the Horizon Online Service

carton. Please note that original boxes may be included, but are not designed to withstand

the rigors of shipping without additional protection. Ship via a carrier that provides tracking

and insurance for lost or damaged parcels, as Horizon is not responsible for merchandise

until it arrives and is accepted at our facility. An Online Service Request is available at

http://www.horizonhobby.com under the Support tab. If you do not have internet access,

for submitting your product for service. When calling Horizon, you will be asked to provide

your complete name, street address, email address and phone number where you can be

reached during business hours. When sending product into Horizon, please include your

RMA number, a list of the included items, and a brief summary of the problem. A copy

of your original sales receipt must be included for warranty consideration. Be sure your

name, address, and RMA number are clearly written on the outside of the shipping carton.

Notice: Do not ship LiPo batteries to Horizon. If you have any issue with a LiPo

For Warranty consideration, you must include your original sales receipt

verifying the proof-of-purchase date. Provided warranty conditions have been met,

your Product will be serviced or replaced free of charge. Service or replacement decisions

are at the sole discretion of Horizon.

the expense exceeds 50% of the retail purchase cost. By submitting the item for

service you are agreeing to payment of the service without notification. Service estimates

are available upon request. You must include this request with your item submitted for

service. Non-warranty service estimates will be billed a minimum of ½ hour of labor. In

addition you will be billed for return freight. Horizon accepts money orders and cashiers

checks, as well as Visa, MasterCard, American Express, and Discover cards. By submitting

any item to Horizon for service, you are agreeing to Horizon’s Terms and Conditions found

Compliance Information for the European Union

specifications listed below, following the provisions of the European R&TTE directive

Signed for and on behalf of:

Instructions for Disposal of

WEEE by Users in the European Union

This product must not be disposed of with other waste. Instead, it is the user’s

collection point for the recycling of waste electrical and electronic equipment. The

human health and the environment. For more information about where you can drop off

your waste equipment for recycling, please contact your local city office, your household

waste disposal service or where you purchased the product.

Declaration of conformity (in accordance with ISO/IEC 17050-1)

FTEG (Article 3 of the R&TTE directive).

ATTENZIONE PER I PRODOTTI CONTRAFFATTI: Grazie per aver

I cavi o i connettori tra

The Spektrum trademark is used with permission of Bachmann Industries, Inc.