12 REGION AMERICAS A rendering shows the design for the expansion of the Las Vegas Convention Center, expected to be complete in 2021. NEW LOOK LAS VEGAS CONVENTION CENTER AT HEART OF LVCVA OFFERING AT ITB CHINA The Las Vegas Convention and Visitors Authority (LVCVA) arrives at ITB China hot on the heels of the release of design drawings for the iconic expansion to the Las Vegas Convention Center. Architects presented the designs to the Board of Directors of the LVCVA on April 10. The drawings provide a glimpse of the vibrant new look of the nearly 60-year-old facility. The LVCCD’s Phase Two is an 0 million expansion project that will add 1.4 million square feet to the current convention center facility, including at least 600,000 square feet of new, leasable exhibit space. The expansion is slated for completion in time to welcome CES in 2021. Late last year, the LVCVA’s Board of Directors finalised the selection of tvsdesign / Design Las Vegas to provide design services for the expansion project. Phase Three will be the complete renovation of the existing 3.2 millionsquare-foot facility, with a projected completion date of 2023 STAND No. 810 For its tenth anniversary, the London West Hollywood at Beverly Hills has been given a major makeover. The London West Hollywood is just off Sunset Boulevard - just two blocks from Beverly Hills. Celebrating the property’s 10th anniversary and their partnership with BAFTA, a number of new renovations are being unveiled, breathing new life into what was already a star location. In 2014, USm was pumped into major renovations, adding in the new suites and 9th floor. And in 2017 another USm Jeff Kulek was spent on further renovations. This is an all-suite hotel. The smallest room is double the size of a standard room in a regular hotel – at 720 square feet. Their bathrooms are luxurious with separate soaking tubs and double headed showers. “All the suites were renovated in 2017,” explains General Manager Jeff Kulek. “In 2014, the owners builtout the ninth floor, and there is a junior ballroom on the second floor that we turned into three luxury suites that are just incredible. Sunset Boulevard runs along General Manager, The London West Hollywood A Spiffingly Nice Hotel on the Doorstep to Beverly Hills the hill, so our hotel has views from every room. I’ve never had that before. All the rooms have balconies, the luxury suites on the ninth floor have three balconies, and the penthouse has the rooftop deck; so the view plane is phenomenal.” Adding to the new suites, a new state-of-the-art fitness center has been opened with the latest in gym technology. There are yoga mats to take outside, where a new mural reflects the spirit of the hotel – a trendy woman’s sunglasses reflecting the Union Jack STAND No. 620 LIMA TAKES OVER HALF ALL NATIONAL TOURISTS A recent study published by WTTC indicates that Lima accounts for over a half of Peru’s tourism. Indeed, Lima accounts for 59% of Travel & Tourism GDP in Peru, as the city is a pivotal hub and gateway to the rest of the country, with 90% of visitors to Peru spending at least one night in the capital, revealed a new report by the World Travel & Tourism Council (WTTC), Latin America City Travel & Tourism Impact. Latin America City Travel & Tourism Impact is one of a series of reports by WTTC which looks at the contribution of Travel & Tourism to city economies and job creation. The study covers 65 cities, six of which are in Latin America. Travel & Tourism contributes 4.6% of Lima’s GDP, a total of US.5bn in 2016 STAND No. 720 ITB CHINA NEWS • Friday 18 th May 2018 www.itb-china-news.com

AMERICAS REGION 13 Vinícius Lummertz President, Embratur “Post Games Brazil” – Maintaining Momentum Culture, ecotourism & adventure, sun & beach make up the nation’s new tourism offering The World Cup Soccer and the Olympic Games have of course had a positive effect on global perception of Brazil as a destination. But how is Embratur, the country’s DMO, attempting to perpetuate this? We put the question to Embratur President, Vinícius Lummertz. At the end of the series of megaevents held in Brazil, (starting with the Pan-American Cup in 2007, followed by Rio+20, World Youth Day, the Confederations Cup, the World Cup and the Olympic Games) Brazil have benefitted from ample exposure to the outside world and the building of both basic and touristic infrastructure. The total investment in the Olympic Games was of R billion, 57% from the private sector and 43% from the public sector. For every R$ 1 invested in sports facilities, another R$ 5 are applied in projects for the city that shall remain as a legacy for locals and tourists. To keep the positive trend, Brazil is now implementing a series of measures for tourists planning to visit Brazil. One big step is the electronic visa that will facilitate the entrance of tourists coming from Japan, the United States and Australia. This upgrade of the tourism process will also leverage the sector in Brazil, generating more employment and income. Brazil is also working to improve the air connectivity. In Europe, there were an increase in flights of 10.80% (from 852 to 944); as in seats of 9.54% (from 256,896 to 281,408), comparing February 2017 to the same period this year. Embratur is also working on content sharing in their social channels such as Facebook, Instagram and YouTube. Digital influencers are now playing a big role in the way we are promoting Brazil Internationally. In addition, we have been doing an intense work focused on tour operators aiming to increase the number of operators that are qualified to commercialize Brazil with excellence. This includes different activities such as workshops, roadshows and online trainings. DIGITAL INFLUENCERS ARE NOW PLAYING A BIG ROLE IN THE WAY WE ARE PROMOTING BRAZIL INTERNATIONALLY What are the key local “products” being promoted here? This year, the segments highlighted will be culture, ecotourism & adventure, and sun & beach. Within that, Brazil will be promoting its nautical and luxury segment, beyond the many resort options available STAND No. 510 TRANSPORT AND TOURISM INFRASTRUCTURE SET TO BE GIVEN A BOOST IN DOMINICAN REPUBLIC Industry professionals at ITB China from Dominican Republic are here “fresh” from the recent DATE conference in Punta Cana. Industry experts at this year’s Dominican Annual Tourism Exchange (DATE) conference agreed upon several initiatives set to build on three trending niches: declared family travel, authentic experiences and luxury. 80% of all visits to Dominican Republic’s protected areas are by foreigners, and once again Colonial City ranked number two – after Isla Saona, amongst the most visited attractions. This trend confirms that visitors are increasingly looking to explore beyond the beaches – and tourism operators have taken note. At this year’s DATE, Best Day (BD) Travel shared its remarkable growth, in 2017 BD served 79,500 passengers transporting tourists to the country’s lush North Coast, cosmopolitan Santo Domingo, luxurious Punta Cana and the unexplored Southwest. As a direct result of its growth BD celebrated its second office in Santo Domingo which opened in December 2017 to support its 20% growth rate for 2018. The company has projects under way in Puerto Plata, in addition to launching a Dominican version of its successful proprietary services app., all by Q4 2018. From romance for two, to a luxurious family soiree, Dominican Republic offers a world-class portfolio of destinations perfect for every traveller, now more accessible than ever. In 2018 Dominican Republic will see major road renovations including the East Region Road Circuit, which contributes to nearly 80% of all tourism income. In the Southwest, an expansion is in the works which will connect Santo Domingo to the booming Southwest. This development will increase connection between the capital city and the up-and-coming touristic areas of Barahona, Baní and Pedernales STAND No. 731 ITB CHINA NEWS • Friday 18 th May 2018 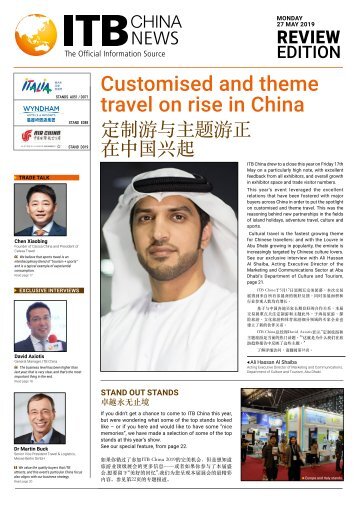 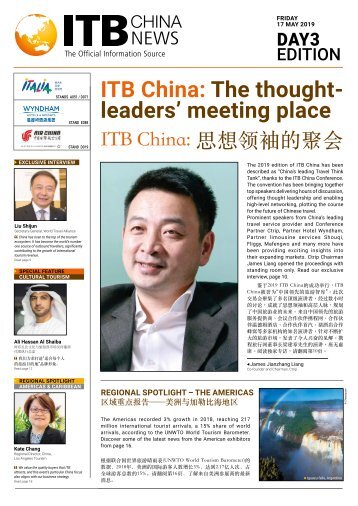 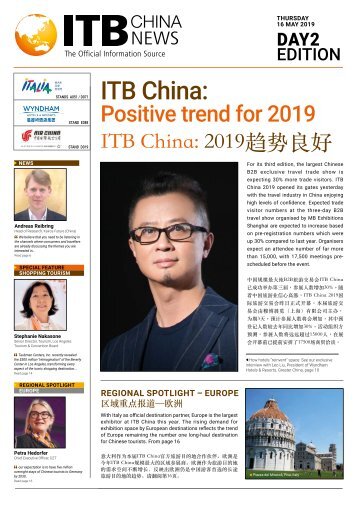 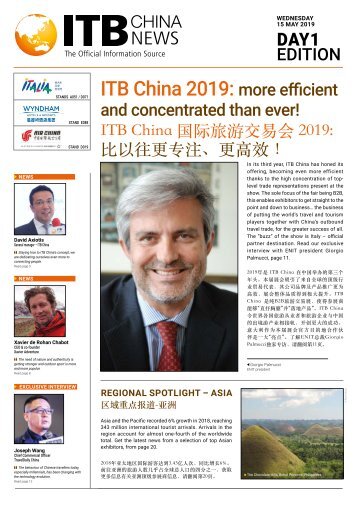 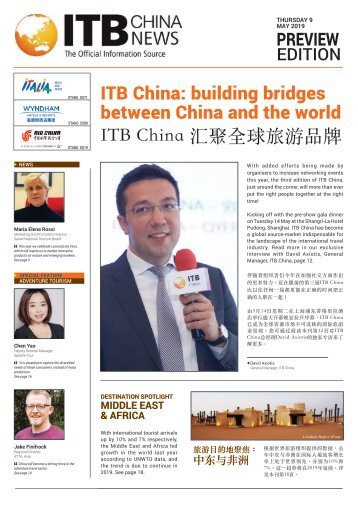 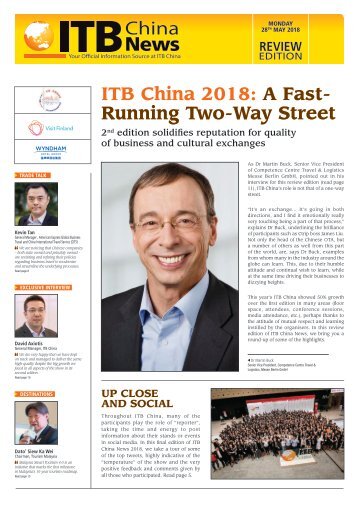 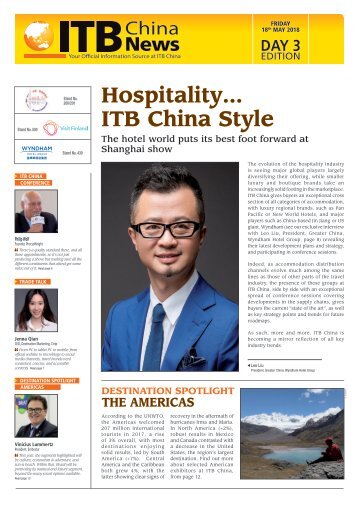 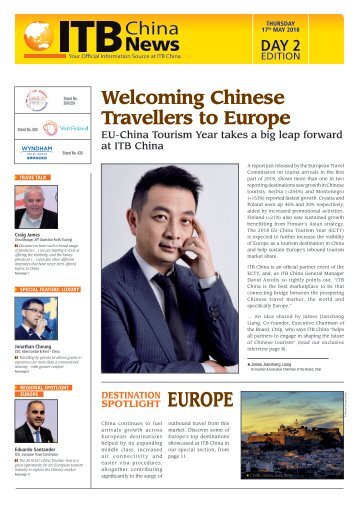 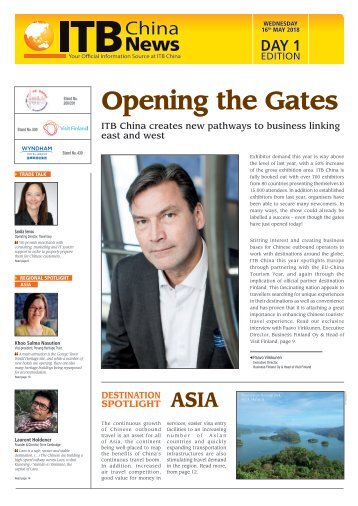 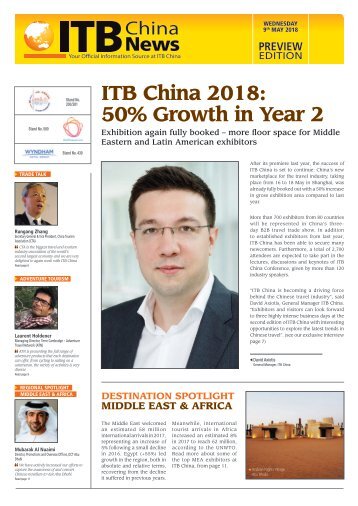