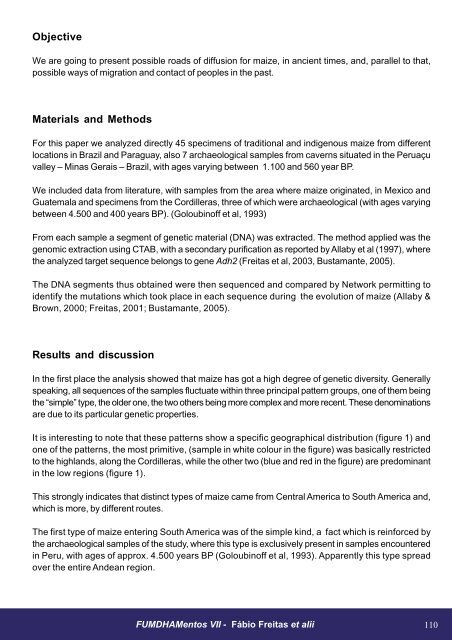 We are going to present possible roads of diffusion for maize, in ancient times, and, parallel to that,

possible ways of migration and contact of peoples in the past.

locations in Brazil and Paraguay, also 7 archaeological samples from caverns situated in the Peruaçu

We included data from literature, with samples from the area where maize originated, in Mexico and

Guatemala and specimens from the Cordilleras, three of which were archaeological (with ages varying

From each sample a segment of genetic material (DNA) was extracted. The method applied was the

genomic extraction using CTAB, with a secondary purification as reported by Allaby et al (1997), where

In the first place the analysis showed that maize has got a high degree of genetic diversity. Generally

speaking, all sequences of the samples fluctuate within three principal pattern groups, one of them being

the “simple” type, the older one, the two others being more complex and more recent. These denominations

are due to its particular genetic properties.

one of the patterns, the most primitive, (sample in white colour in the figure) was basically restricted

to the highlands, along the Cordilleras, while the other two (blue and red in the figure) are predominant

in the low regions (figure 1).

This strongly indicates that distinct types of maize came from Central America to South America and,

which is more, by different routes.

The first type of maize entering South America was of the simple kind, a fact which is reinforced by

the archaeological samples of the study, where this type is exclusively present in samples encountered

over the entire Andean region.