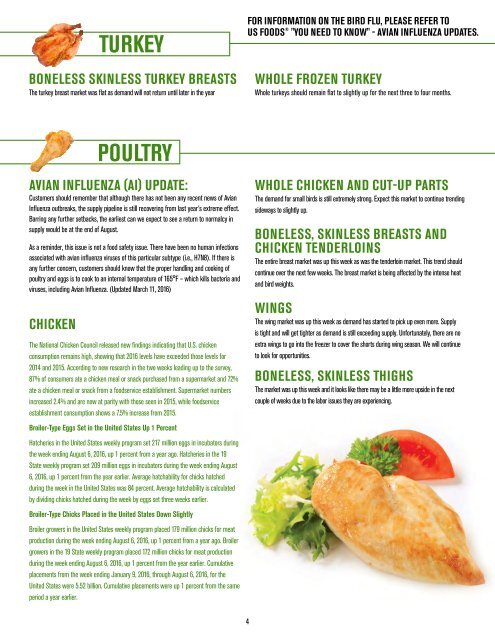 FOR INFORMATION ON THE BIRD FLU, PLEASE REFER TO

US FOODS ® "YOU NEED TO KNOW" - AVIAN INFLUENZA UPDATES.

Whole turkeys should remain flat to slightly up for the next three to four months.

Barring any further setbacks, the earliest can we expect to see a return to normalcy in

supply would be at the end of August.

As a reminder, this issue is not a food safety issue. There have been no human infections

associated with avian influenza viruses of this particular subtype (i.e., H7N8). If there is

any further concern, customers should know that the proper handling and cooking of

consumption remains high, showing that 2016 levels have exceeded those levels for

ate a chicken meal or snack from a foodservice establishment. Supermarket numbers

increased 2.4% and are now at parity with those seen in 2015, while foodservice

establishment consumption shows a 7.5% increase from 2015.

Broiler-Type Eggs Set in the United States Up 1 Percent

6, 2016, up 1 percent from the year earlier. Average hatchability for chicks hatched

during the week in the United States was 84 percent. Average hatchability is calculated

by dividing chicks hatched during the week by eggs set three weeks earlier.

Broiler-Type Chicks Placed in the United States Down Slightly

production during the week ending August 6, 2016, up 1 percent from a year ago. Broiler

during the week ending August 6, 2016, up 1 percent from the year earlier. Cumulative

United States were 5.52 billion. Cumulative placements were up 1 percent from the same

The demand for small birds is still extremely strong. Expect this market to continue trending

sideways to slightly up.

The entire breast market was up this week as was the tenderloin market. This trend should

continue over the next few weeks. The breast market is being affected by the intense heat

The wing market was up this week as demand has started to pick up even more. Supply

is tight and will get tighter as demand is still exceeding supply. Unfortunately, there are no

extra wings to go into the freezer to cover the shorts during wing season. We will continue

to look for opportunities.

couple of weeks due to the labor issues they are experiencing.

COMMODITY OIL SOY AND CANOLA OIL In a strong counter-seasonal move, the soybean oil futures and basis markets have posted significant gains since late July. The primary drivers behind this rally are: strength in the global palm oil market on lower stocks and stronger Chinese demand; continued solid pace of the U.S. soybean oil exports - U.S. dollar still headed lower; record use of soybean oil for biodiesel production in the U.S. ahead of elections; large drop from June to July on NOPA domestic bean oil stocks despite high yields; and commodity fund (speculative) traders have flipped from net short to net long positions. We’ll be looking for a pullback late August/September to push pricing closer to $0.31. Current market at $0.34 SOY: • The U.S. soybean crop is currently rated at 72% good to excellent. That is the fourth highest level of the past 30 years for this point in the growing season. Record yields are expected at this point. • The USDA’s August supply/demand report raised the soybean ending stocks estimate by 40 million bushels for the 2016/2017 crop year. However, the USDA lowered its soybean oil ending stock estimates significantly in August, recognizing a record pace of soybean oil used for U.S. biodiesel production ahead of elections and increased export business – U.S. dollar still headed lower. • Soybean oil’s share of product value has rallied over 4% since early July at the behest of a sharp drop in soybean meal values. Current fundamentals suggest a move to 36% in the spot position is likely. PALM OIL: • Palm oil prices made two-month highs this week on lower than expected July stocks in Malaysia and stepped up buying from China. Seasonal production increases have started out at a lower than expected pace. CRUDE: • Crude oil has been able to stay above the $40 per barrel level (profitable bio margins), contributing to posted gains. EXPORTS: • The USDA lowered its soybean oil ending stock estimates significantly in August, recognizing increasing export business and a record pace of soybean oil used for biodiesel production. SEASONALS: • Soybean oil prices have a strong seasonal tendency to move lower in the months of August and September. DAIRY BUTTER Butter production is mixed across the country as cream supplies are uneven. We are nearing the time frame when prices skyrocketed the past two years. The market fundamentals are not supporting another $3.00/lb high as stocks are higher than year ago levels, production is up and retail holiday bookings were active earlier this year. There is still some risk with the skyrocketing prices, but we could also see a significant decrease as sellers look to unload heavy supplies. MILK AND CREAM Bottle milk sales are up, as is demand. Production remains steady across the country except in the West where high temperatures have been disrupting the cows. With back to school upon us we will continue to see a rise in demand and pricing. FMO commodities for August were all up except for class II butterfat. California commodities were all up. CHEESE Cheese prices have continued to climb each week since May. It seems as though lower than expected production and higher than forecasted demand continue to be the drivers of the higher markets. Markets were not expected to be trading this high and until demand lets off we will continue to see the higher market. Expect markets to continue to trade within the current range with upside expected in Q4. SHELL EGGS Retail demand patterns are good with more promotional activity and schools coming back in session. Wholesale buying interest has been active this week, with bids to buy now exceeding current offerings. Prices have increased due to the increased demand and tightening supply. This trend should continue for the near term. 5 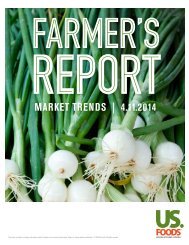 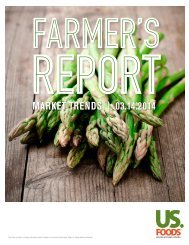 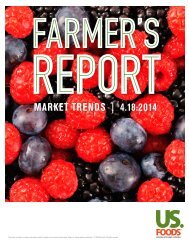 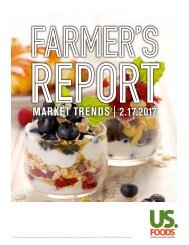 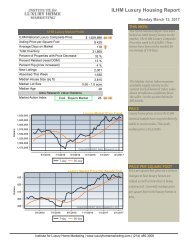 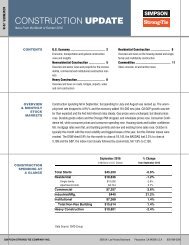 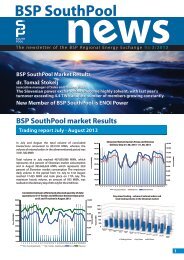