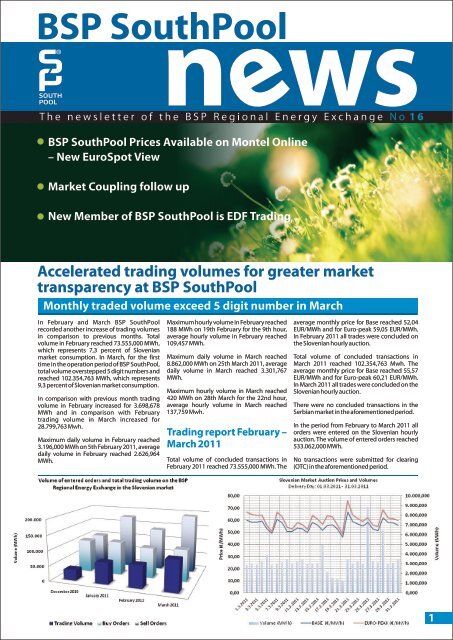 The newsletter of the BSP Regional Energy Exchange No. 16

The newsletter of the BSP Regional Energy Exchange No. 16

In February and March BSP SouthPool

recorded another increase of trading volumes

in comparison to previous months. Total

which represents 7,3 percent of Slovenian

market consumption. In March, for the first

time in the operation period of BSP SouthPool,

In comparison with previous month trading

MWh and in comparison with February

trading volume in March increased for

average monthly price for Base reached 52,04

In February 2011 all trades were concluded on

average monthly price for Base reached 55,57

In March 2011 all trades were concluded on the

There were no concluded transactions in the

Serbian market in the aforementioned period.

In the period from February to March 2011 all

orders were entered on the Slovenian hourly

No transactions were submitted for clearing

(OTC) in the aforementioned period.

» The option to compare baseload and block spot prices

from all major European power exchanges,

» The ability to match spot prices against

» Straightforward calculation of running and

» Straightforward export of data to Excel

you will get a 20% discount

on Montel Online until

the end of April.

After the introduction of Market Coupling on the Slovenian-Italian

border (hereinafter referred to as “MC”) the volume of day-ahead

trade increase, also due to the merger of the Slovenian market with the

Italian market (MC), has been recorded at BSP SouthPool.

which is 95,03% of available. In the direction from Italy to Slovenia the

Through the implicit allocation at BSP SouthPool 1.226,000 MWh of

those were allocated, which is 0,01% of available.

setting of price signals for the Slovenian electricity market is in place.

BSP SouthPool organized on 24 March 2011 the

Market” on the behalf of the company European

Educational course was tailor made and based on the

expressed interest of the participants. In addition to

became a member of BSP

group that entered into membership at BSP

The company will henceforth – as the 29th

participant of the Slovenian electricity dayahead