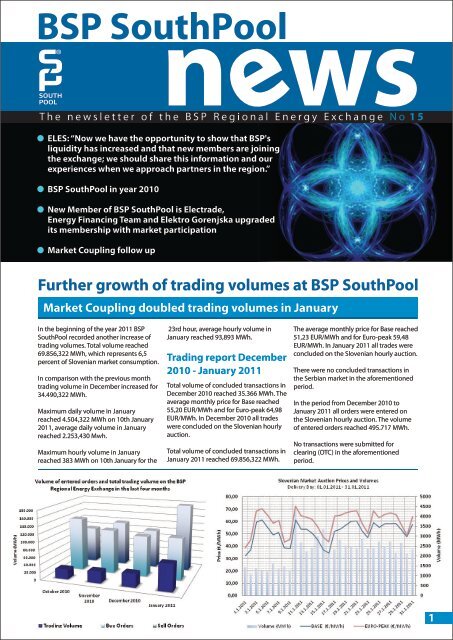 The newsletter of the BSP Regional Energy Exchange No. 15

The newsletter of the BSP Regional Energy Exchange No. 15

ELES: “Now we have the opportunity to show that BSP's

liquidity has increased and that new members are joining

the exchange; we should share this information and our

experiences when we approach partners in the region.”

its membership with market participation

In the beginning of the year 2011 BSP

SouthPool recorded another increase of

In comparison with the previous month

trading volume in December increased for

average monthly price for Base reached

were concluded on the Slovenian hourly

The average monthly price for Base reached

EUR/MWh. In January 2011 all trades were

concluded on the Slovenian hourly auction.

There were no concluded transactions in

the Serbian market in the aforementioned

In the period from December 2010 to

January 2011 all orders were entered on

the Slovenian hourly auction. The volume

No transactions were submitted for

clearing (OTC) in the aforementioned

M.Sc, Chairman of the

is a CEO of ELES, the

in Slovenia, that is a

In December you became the

President of the BSP SouthPool

Supervisory Board. Which are the

achieve through the ownership

The focus of ELES' participation as an

owner is particularly coupling of the

Slovenian and the Italian market, i.e.

Market Coupling. As a partner in the

Market Coupling process and since

Slovenia had signed a memorandum

with Italy on performing Market

Coupling, we realised that an

exchange is needed on our side in

order to cooperate with the exchange

on the other side of the border. Had

we not entered in co-ownership of

BSP we would probably have to

establish an exchange ourselves. The

favourable, as well as the most

optimal solution for Slovenia. In

ELES needs an exchange in any case if

we wish to perform implicit allocation

of capacities that we used to allocate

explicitly and are today being

allocated on our behalf by auction

offices, such as CASC for the

Slovenian-Italian border or CAO for

Transmission capacities are of

extreme importance since they

contribute to quite a large income.

Without this income our business

results would have been negative.

This income is therefore very

important for us; however, in

accordance with the European

legislation and directives it can only

be used for increasing transmission

trading. Since ELES gives these

capacities to someone else for

allocation, we believe we should also

have control over that. Following the

and CAO we have thus joined the BSP

The liquidity of the exchange on

increased significantly. Which are

the key measures for

improvements in the future?

A short while ago we held a BSP

Supervisory Board meeting at which

we examined the plan for this year,

which will soon be confirmed. This

will be around a positive zero since

we cannot allow an operating loss for

We are aware of the small size of the

market which makes the exchange

very limited and it will be difficult to

this can be achieved with the right

attitude, engagement of the

exchange members and by

increasing turnover. In the last few

compared to trading on the

exchange from when it was first

established. A bigger turnover is what

is enabling the exchange to survive

only through its own work. Our goal

is to bring BSP exchange to a point

where it can operate independently

and is no longer dependent on its

With regard to development

projects in the region and BSP

what are in your opinion the

and an increase in BSP SoutPool's

liquidity in the said markets?

We all know the markets of SE Europe

are very demanding. Since

important for System Operators, it is

understandable that they wish to

have control over their allocation.

That is why the Slovenian exchange

ownership model can be used as a

model for other markets. Now we

have the opportunity to show that

BSP's liquidity has increased and that

new members are joining the

information and our experiences

when we approach partners in the

region. At the Supervisory Board

meeting we discussed our aim to try

to convince the Serbian operator to

do the same in the Serbian market

and to act similarly in Macedonia. The

processes will be run in a way that no

Clearly it is easier to work and

introduce a model abroad if you have

sufficient support from home and if

your model is showing positive

results. This was not the case in the

past. I believe we now have a good

opportunity that is worth taking

With regard to its function as the

ELES is at the junction of three

regions. How does this affect your

work and how do you see the

convergence of the three regional

This is a very complex issue and we

are actually caught in the draught.

Currently we are going through a

transitional period in which all

markets differ from each other. We

have one set of rules at CASC, another

set at CAO and there are plans to

establish a third Allocation Office, but

not much good will has been shown

for that so far. Nevertheless some

positive shifts have occurred in this

region lately and they show us that

this region will come to life shortly.

In the current situation there are

slightly different rules on every

border, but they all converge in a

was made on the Croatian border

where coordinated auctions for

an agreement to introduce similar

methods on this border as those in

place on the Austrian or Italian

border. With this we are following the

goals of the EC which has been

intensively promoting the process of

establishing the common rules on the

barriers. In the end this will mean less

work for everyone. Also for us since at

the moment special rules have to be

issued annually for each of these

the work-load on key investments

in the transmission network, which

ensures a high level of systemic

safety also in the future. Which are

Recently, we have seriously started

working on some of our projects,

even those that have been agreed

quite a while ago. One of such

projects is the Beričevo-Krško project;

although this project does not have a

direct influence on traders, it does

affect the operational security of the

power system and ensures the

during repairs and maintenance,

which directly affect the electricity

Another investment that was finished

last year was the phase shifting

was finished one year ahead of

schedule and with lower costs than

those planned. It is an important

project since ELES, through a lot of

work and commitment of its

capacities on the Italian border.

the Italian market and given our

traders a possibility for better

the capacity prices were also reduced,

which I think has had a favourable

effect on the growth of the exchange

with Italy. It is my goal to further

increase these capacities and thereby

Recently we were able to strengthen

the Primorska network and thereby

establish better conditions for the

operation of PHPP Avče; the latter

pump water to be used for the

energy generation at times of low

when the prices are higher.

In the future we are planning to

upgrade the network with smart

devices that will enable additional

and reduction of losses; all this is a

part of our final goal – the lowest

possible energy prices for our endusers.

We have also increased work on

with Hungary where the first

activities started between 12 and 15

years ago when the first construction

agreements were signed. The

Hungarian side built an overhead

power line extending to the

postponed. At the moment a

national spatial plan that was

submitted to the Ministry of the

Environment and Spatial planning by

the Ministry of Economy is being

adopted. Due to the long period of

amendments, the progress of the

project is time consuming. Its

realisation is thereby threatened and

the possibilities for grid connection

of other projects, such as the

some other, are impaired. In order to

speed up and to try to finish the

project within deadlines and to

execute it for the general well, ELES

manager who proved himself in the

Total volume of concluded transactions in the 2010 reached

trading and 195.311 MWh was concluded in auction trading.

transactions reached 16.286 MWh. There were no concluded

transactions in the Serbian market in the aforementioned

SouthPool from 32 companies, of which 26 participated on

Slovenian market and 7 participated on Serbian market. The

remaining 6 members have not participated in any BSP

The total volume of entered orders reached 1,79 TWh until the

Frankfurt AG and became a sole owner of the company.

session' times to other trading activities on Slovenian electricity

SouthPool, and Borzen decided to sell part of the energy from

the Centre for RES/CHP support on BSP SouthPool. ELES and

In 2010 one company has decided not to prolong its membership

and respective market participations on Slovenian and Serbian

BSP SouthPool markets. On the other hand 2 companies have

decided to upgrade its exchange membership with market

exchange membership together with respective market

participations for Slovenian market and 1 company entered into

exchange membership without any market participations.

Market coupling on the

Slovenian TSO), Terna (the Italian TSO), and Borzen (the

Slovenian MO) realized the project of the establishment of the

market coupling on the Slovenian-Italian border. With the

introduction of the market coupling as of 31 December 2010,

using the implicit method of allocation for the daily crossborder

capacity on the Slovenian-Italian border, growth of

market is expected. This is the first project of its kind in this part

of the Europe and represents an upgrade from the previous

The most important public event where BSP regularly

presented itself is the annual E-World fair in Essen, Germany. We

have been actively presenting ourselves at the fair since 2007

SouthPool presented itself in Essen also in 2010. The E-world is

known as one of most important energy fairs in Europe.

GME (the Italian PX), ELES (the Slovenian TSO), Terna (the

The Pentalateral Agreement defines the procedures for

the management of the Market Coupling on the

signature rounds up the contractual framework related to

At the proposal of Faculty of Electrical Engineering

made and based on the expressed interest of the

students. In addition to theoretical lessons,

BSP SouthPool operations and about state of the

upgraded its membership on

BSP SouthPool with market and

In December Electrade S.p.A. became a

membership at BSP SouthPool and will actively participate in

decided to upgrade its membership on BSP

SouthPool with market and clearing

The company will henceforth – as the 27th participant of the

decided to upgrade its membership on BSP

SouthPool with market and clearing

The company will henceforth – as the 28th participant of the