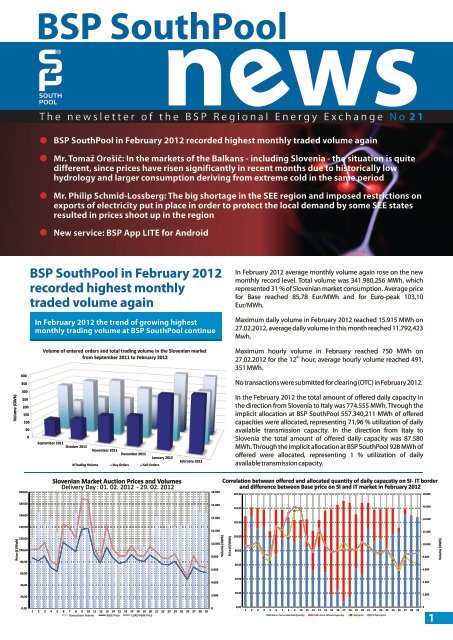 The newsletter of the BSP Regional Energy Exchange No. 21

The newsletter of the BSP Regional Energy Exchange No. 21

Mr. Tomaž Orešič: In the markets of the Balkans - including Slovenia - the situation is quite

different, since prices have risen significantly in recent months due to historically low

Mr. Philip Schmid-Lossberg: The big shortage in the SEE region and imposed restrictions on

resulted in prices shoot up in the region

In February 2012 the trend of growing highest

In February 2012 average monthly volume again rose on the new

No transactions were submitted for clearing (OTC) in February 2012.

the direction from Slovenia to Italy was 774.555 MWh. Through the

Slovenia the total amount of offered daily capacity was 87.580

MWh. Through the implicit allocation at BSP SouthPool 928 MWh of

Europe, EFT Ltd): In the

markets of the Balkans -

have risen significantly in

recent months due to

cold in the same period.

According to expert predictions, exiting the crisis

will increase the price of electricity. What is your view

Electricity prices are now at the same level or even lower

than they were before the nuclear disaster in Fukushima,

and the disaster itself seems to no longer influence

business in Japan. In other parts of the world acceptance

of nuclear generation is recovering.

the closure of its seven nuclear power plants caused a 25

percent increase in electricity prices on the power

exchange in Leipzig. Because of the pessimistic forecasts

on future economic growth in the euro area, the demand

for electricity hasn't increased, while prices have

gradually declined. In the second half of 2011 prices had

already reached the same level as those before the

In the markets of the Balkans - including Slovenia - the

situation is quite different, since prices have risen

significantly in recent months due to historically low

consumption deriving from extreme cold in the same

period. On an annual basis prices increased by

approximately 10 percent and we witnessed even higher

increases on a monthly and on a daily basis. These

conditions brought to the forefront our high dependency

on hydrological conditions and, on the other hand, the

direct dependence imposes an emergency on us, so we

not meant only from the perspective of monitoring those

investments, but also of being an active player in the

investment cycle in these markets.

What are your expectations regarding long-term

energy policy and pricing in the region and beyond?

that they will embed expectations of economic growth. I

am rather an optimist, in terms of economic growth

prospects, and therefore I believe that prices of electricity

will be higher in the future. No matter how the economy

will develop, the price situation should allow investors to

situation in the industry is not optimal after it was mostly

hit by high gas prices and the German nuclear withdrawal

last year. Without new investments we may witness a

significant shortage in the SE region and thus much

higher prices. In this regard, our region is staggering

Price growth could also be influenced by higher prices of

emission allowances which are mostly dependent on

Do you expect the South Stream project to reshape

the energy sector in the region, stabilize gas prices

and attract new much-needed investments to the

Balkans? How would that reflect in electricity prices?

It is not just about the South Stream project, it is about the

European gas market in general. It is about liquidity, how

prices will be formed, about the duration of contracts and

about the proportion between spot- and longer term

contracts. The key issue today is that no investments in

new gas-fired generation seem to be feasible. It is true

that the presence of important new gas infrastructure in

the region contributes to stability and potentially to the

security of supply however only a significant shift in the

correlation between gas and electricity prices will attract

In other words, South Stream brings a good basis for the

development of the sector in the region but first some

basic parameters of the market have to change in order to

shortage in the SEE

put in place in order

to protect the local

demand by some SEE

prices shoot up in the

Which are by your opinion the reasons behind recent

market and its reflection on market access and price

formation on Slovenian and other SEE markets?

with the mercury reaching as low as 35 degrees Celsius

below zero. After what had been a relatively mild winter,

the sudden cold caught many unprepared. Eastern and

South Eastern Europe were hit hardest and also other

Extreme cold brought alongside other inconveniences a

high demand for electricity, especially in the countries

which mostly use electricity for heating. In France we

Additional reasons for the significant growth of the

electricity price on the European level, were the nuclear

from more expensive oil power plants that had to be

switched on (oil price was already high) and very high

spot prices of gas (especially in week 6) where TTF price

the same period due to the big shortage in the SEE region,

because the hydro levels have been very low and

Romania and Bulgaria) closed their borders in order to

protect their local demand, prices were shoot up even

What are your expectations regarding long-term

energy policy and pricing in the SEE and the CWE

region and its reflections in the SEE from the

Price development in the CWE region will be very much

depended on the economic growth, that is how fast we

will recover from the financial crises. The increased

electricity production from renewables will play a much

more dominant role in the Spot market than in the past

and will see its heavy influence on the electricity prices.

correlation of the Hungarian and the SEE prices to the

German market will diminish more and more and these

markets will gradually develop their own pricing.

Regional influence, such as hydro availability, will play a

more significant role as it was up till now. Also missing

spreads) in the power plant infrastructure in the SEE

region could attribute to rising prices in the future in this

prices are consistent with the trading results at

presentation of the main

display of the market

coupling results on the

- The results of day-ahead

day seminar for traders and analysts was held in

Ljubljana on 14th and 15th March. In addition to

production in Germany) participants were able to

put into practice what they learned by participating

at the simulation workshop that took place on the

expectations in number of attendees and in

broadens of the debate that evolved within the

entered into membership at BSP SouthPool.

The company will henceforth – as the 33nd

participant of the Slovenian electricity day-ahead