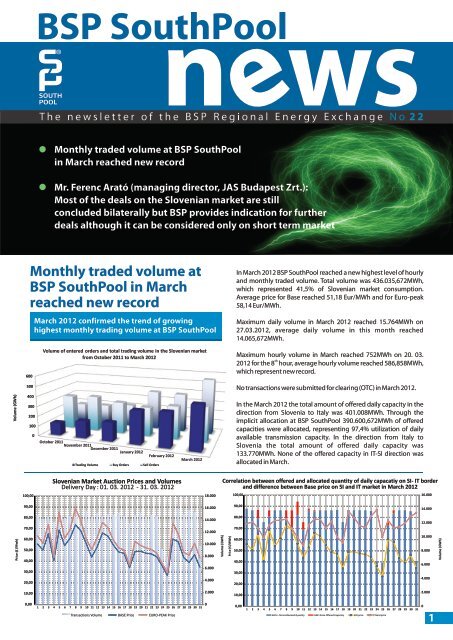 The newsletter of the BSP Regional Energy Exchange No. 20

The newsletter of the BSP Regional Energy Exchange No. 20

Most of the deals on the Slovenian market are still

deals although it can be considered only on short term market

March 2012 confirmed the trend of growing

which represented 41,5% of Slovenian market consumption.

No transactions were submitted for clearing (OTC) in March 2012.

direction from Slovenia to Italy was 401.008MWh. Through the

Slovenia the total amount of offered daily capacity was

133.770MWh. None of the offered capacity in IT-SI direction was

Most of the deals on

it can be considered

only on short term

How long have you been present on power markets

in SEE? How is JAS positioned in the electricity

markets of the SEE region?

The JAS Company Group has a close to ten years

experience in the electricity market in Europe. JAS

when the liberalisation of the Hungarian electricity

market allowed this kind of trading. In the coming years

JAS has developed its wholesale trading network in the

neighbouring countries. We are actively trading in

Republic, Hungary, Romania and Serbia. In order to

You became a member of BSP SouthPool at the end

of last year. Why did you decide to make this step?

Were your initial expectations met?

JAS decided to take part in the BSP power exchange after

the 1st 9 month of BSP's operation. We do find BSP as an

transparency of the market. Most of the deals are still

further deals although it can be considered only on short

What would be your suggestions regarding future

development of Slovenian electricity market in

between Hungary and Slovenia etc. from the

Compared to the Hungarian power exchange we do

believe that further developments would be welcome by

future products. This kind of development would also

ensure the transparency of the Slovenian electricity

As JAS is also present in Serbia, we appreciate BSP efforts

to start the hourly auction trading inside Serbia. Although

will achieve the same quantity as in Slovenia.

trade with electricity in Serbia.

Total volume provided into BSP clearing in the

Market participants incentive at this stage was to

on designated market. From the time being 8

companies were able to use BSP clearing facilities

Europe EAD joined them. In the first two weeks of

in the provided service.

On the 22 of March BSP organized Exchange trader training

GEN-I attended on the training. Participants got knowledge

Next Exchange trader training course will take place of 31 of

May 2012. All information about training are available on our