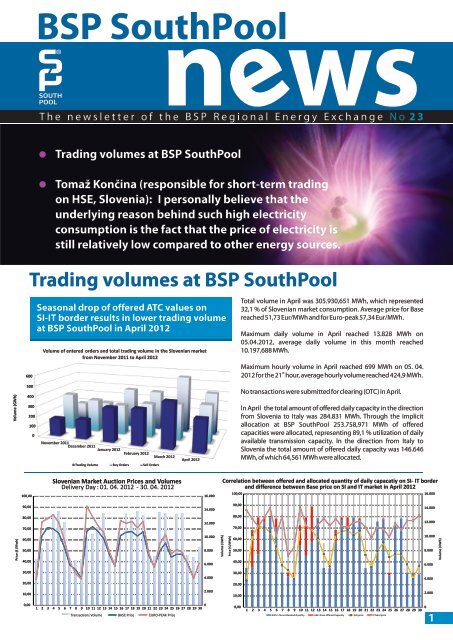 The newsletter of the BSP Regional Energy Exchange No. 24

The newsletter of the BSP Regional Energy Exchange No. 24

on HSE, Slovenia): I personally believe that the

underlying reason behind such high electricity

consumption is the fact that the price of electricity is

at BSP SouthPool in April 2012

32,1 % of Slovenian market consumption. Average price for Base

No transactions were submitted for clearing (OTC) in April.

from Slovenia to Italy was 284.831 MWh. Through the implicit

Slovenia the total amount of offered daily capacity was 146.646

I personally believe that the

consumption is the fact that

the price of electricity is still

How much room and how many opportunities are there

in the South-Eastern European region, in particular in the

Western Balkans, for any new players?

The overall picture is different from that in the past, as the

number of traders operating in the SEE region has increased,

and the rules as well as TSO systems have become more

complex. The situation as it is now is rather unfavourable for

anyone, but above all for small enterprises, as the latter find it

difficult to manage the risks associated with the respective

market. This assumption is confirmed by the fact that certain

of investments rather than trading. The fact is that the South-

Eastern European region is relatively closed and in a situation

when energy or transmission capacity prices skyrocket, the

fulfilment of contractual obligations is questionable. It is for this

reason that the situation of partner companies is reviewed

increasingly more thoroughly. When closing a deal, one needs to

resort to guarantees, which serve as insurance against nonpayment

or failure to deliver energy. Larger companies deal with

such shocks or risks much easier than small enterprises. HSE has

no problems in this respect, owing to its size and reputation.

Does this mean that many of the small enterprises have

withdrawn from the market?

Some of them did withdraw one way or another, but in general,

there is a certain caution as regards doing business.

What is the current situation on the market, or the

trading, that is, in light of the dry season we are

When hydrological conditions in the region are good, there may

be a surplus of energy, which depends on the consumption. This

energy can be sold on foreign markets. Recently, the

hydrological situation has not been favourable owing to a

persistent dry season, so there are no surpluses. The

consumption is currently moderate or even high if we consider

the crisis, while transmission capacities reductions as well as

repairs of certain production units have both been affecting the

whole situation. I personally believe that the underlying reason

behind such high electricity consumption is the fact that the

price of electricity is still relatively low compared to other energy

sources. For that reason, increasingly more consumers tend to

use electric heating and cooling systems.

What do you think will happen after 1 January 2013 when

the Serbian market which is the most important market

in the SEE region will open and electricity will no longer

be treated as a social good?

I believe that certain cuts which have been announced by the

politicians would not be implemented that rigorously. It is hard

to deprive people of a good that enables normal life, as this

might result in general dissatisfaction. I think that in certain

countries within the region the social note is displayed

particularly with regard to electricity.

Yet the region in general – notwithstanding all the issues

Definitely. And in poor hydrologic conditions, there are always

assessment of market developments. And certainly there

How did the cold snap earlier this February affect the

Some countries even closed their borders.

systems were so much overloaded that the reserves were used

practically all the way. The reliability of energy supply in the

decided to temporarily close their borders. To be more specific,

certain trader had previously purchased from TSO and used

power system. This reaction by TSO put in an unenviable

position all those traders who used the above mentioned

countries for energy transit. In turn, they had to use alternative

transmission routes to be able to supply their partners with

energy. The decision whether this has been justified or not lies

with the legal experts. Luckily, HSE has had no problems in this

regard, as we have managed to fulfill all our obligations towards

our partners despite the reductions.

Let us move to the Serbian electricity market which is the

most interesting market in the region. What are the

expectations regarding this particular market which

borders eight countries, and which has been increasingly

modernising and upgrading its combined heat and

power production capacities, and has been forming also

its own electricity exchange?

Well, this market or this country, that is, is currently in a transition

similar to the one Slovenia has already undergone. This means

that the market will need to ensure, just as other markets have

had to, a certain transparency as well as other operating

conditions, which is primarily the function of institutions that

influence the electric power market in the country. Recently, the

Serbia, so we might say that auction trading is already possible

at the Serbian exchange. The problem as I see it is the liquidity

that urgently needs to be improved by means of involving a

market promoter. But it is also true that Serbia has been

developing its own electricity exchange, which has been

discussed for quite a long time now. We will see when it will really

come to life. I think it might be a good idea for BSP Southpool

and the exchange concerned to consider the possibility of

cooperation and thus make use of a variety of synergies such

partnership has to offer. The establishment of a liquid exchange

would take Serbia's energy trading to the next level and bring

Serbia closer to the group of countries it gravitates towards.

To read the full interview with mr. Tomaž Končina

The BSP newsletter published interviews with our

participants about views of development of Slovenia

electricity market and power exchange. As an

upgrade to these interviews, we will cooperate with

energetika.NET, which is one of the most important

Slovenian provider of energy news and the foremost

Europe. Together we will try to find topics and person

that will ensure our readers with addition content. In

the BSP newsletter, part of the interview will be

published and the whole interview will be available

On the 8 of May BSP organized Exchange

trader training course. On the training

Participants got knowledge about BSP

Next Exchange trader training course will

information about training are available

on our web page.