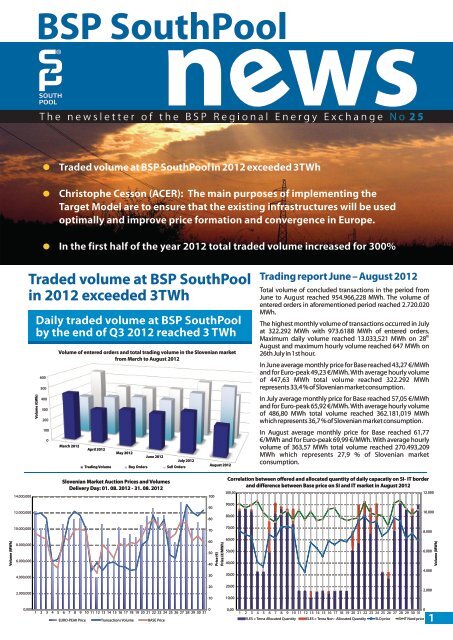 The newsletter of the BSP Regional Energy Exchange No. 25

The newsletter of the BSP Regional Energy Exchange No. 25

Christophe Cesson (ACER): The main purposes of implementing the

optimally and improve price formation and convergence in Europe.

Total volume of concluded transactions in the period from

The highest monthly volume of transactions occurred in July

In June average monthly price for Base reached 43,27 €/MWh

and for Euro-peak 49,23 €/MWh. With average hourly volume

In July average monthly price for Base reached 57,05 €/MWh

and for Euro-peak 65,92 €/MWh. With average hourly volume

which represents 36,7 % of Slovenian market consumption.

In August average monthly price for Base reached 61,77

MWh which represents 27,9 % of Slovenian market

purposes of implementing the Target Model

are to ensure that the existing infrastructures

will be used optimally and improve price

formation and convergence in Europe.

Please highlight the main points of the Joint

Declaration and its goal.

The goal of this Joint Declaration is to recall the objective

shared unanimously by all CEE NRAs—which is the

by the end of 2013. It was important to issue this Joint

Declaration, as discussions about the implementation

plan have led to very specific and technical topics where

the initial goal had been somehow demoted. This Joint

Declaration helped all stakeholders to reframe their

action in an efficient way toward the original objective.

The main points of this Joint Declaration are the following:

1. Unanimous commitment by CEE NRAs to

2. Implementation to occur in one single step in the

whole region (the FB as the capacity calculation

and MC as the congestion management);

Exchanges that takes care of the elements raised

in points 3 and 4 of the Joint Declaration,

specifically, definition of a governance structure,

setting of clear milestones, compatibility with

the ongoing projects in the Central West Europe

(CWE) Region and within the CEE region, as well

as with the Capacity Allocation and Congestion

Management Frameworks Guidelines and the

4. Signature of a Memorandum of Understanding.

What is the current status of activities related to the

implementation of the Target Model? Is there a

roadmap for the implementation of the Target

Activities related to the implementation of the Target

Model for the day-ahead project are ongoing. They

include the fact that Power Exchanges are working on the

implementation of the Price Coupling of Regions (PCR)

project in time in the North West Europe region (the first

step in the European implementation plan), taking on

board specificities from the CEE region for a quick and

smooth extension by the end of 2013. In addition, TSOs

are working together to develop an efficient FB method

for the CEE region and in close cooperation with the CWE

TSOs to ensure compatibility. A single CEE roadmap is to

be presented by the end of the month.

What are the milestones or critical points to be

overcome in order that the Target Model is

One critical point particularly in the CEE region is the

unplanned flows. These flows hamper the integration of

an Internal Electricity Market and are a threat to the

The Agency and NRAs from all regions agree to focus on

several types of remedies to deal with unplanned flows.

These can be ordered into short-term and mid- to longterm

solutions. The short-term solutions include

(enhanced) coordination among TSOs, optimal use of

management. The mid- to long-term remedies include

reinforcement investments, the introduction of

appropriate bidding zones, and a possible review of the

ITC mechanism. To this end, a scheme for sharing the cost

of investments and coordinated management of phaseshifting

transformers should be analysed.

Moreover, the Agency and NRAs support the proposal of

process of reviewing the bidding zones as defined in the

Network Code, as soon as possible, and also to define the

appropriate geographical scope for such a study, which

should include at least CWE, CEE, Switzerland, and Italy.

Another element ACER fights against is the temptation for

Since the implementation of the Target Model is realised

in a parallel, informal, and voluntary-based framework (at

least as long as the network Code on Capacity Allocation

and Congestion Management are not binding), some

stakeholders may try to impose their conditions and delay

the whole process. This kind of problem emerges

whenever a consensus is needed and a great number of

stakeholders are involved. With the help of all NRAs and

reports on a quarterly basis any progress toward the

To read the full interview with Mr. Christophe Cesson

In the year 2012 BSP SouthPool recorded increase of trading

volume at Slovenian Day-ahead market. In the first half of the year

2012 total traded volume was 3 times higher as previous year. The

volume in the period from January to June was 2.064 TWh, which

prices have risen significantly due to historically low hydrology

from extreme cold. In Q1 and Q2 25 BSP members participated at

On the 20 of September

Comparison between price and volume