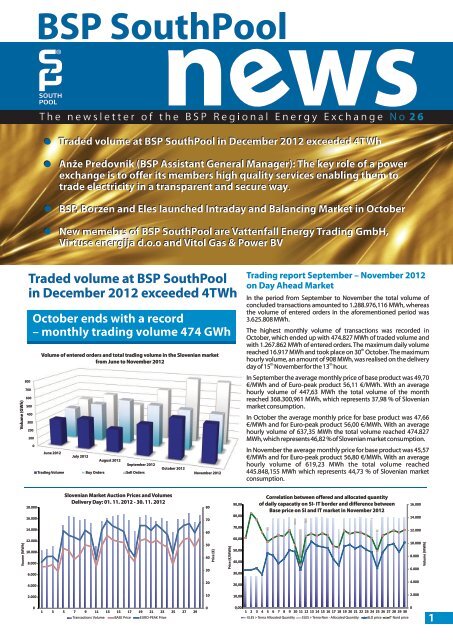 The newsletter of the BSP Regional Energy Exchange No. 26

The newsletter of the BSP Regional Energy Exchange No. 26

trade electricity in a transparent and secure way.

October ends with a record

on Day Ahead Market

In the period from September to November the total volume of

the volume of entered orders in the aforementioned period was

The highest monthly volume of transactions was recorded in

October, which ended up with 474.827 MWh of traded volume and

hourly volume, an amount of 908 MWh, was realised on the delivery

In September the average monthly price of base product was 49,70

hourly volume of 447,63 MWh the total volume of the month

In October the average monthly price for base product was 47,66

In November the average monthly price for base product was 45,57

Correlation between offered and allocated quantity

of daily capacatiy on SI- IT border and difference between

Base price on SI and IT market in November 2012

services enabling them to trade electricity in a transparent

You have been working at BSP since its establishment.

For the last two years you have had the position of

Assistant General Manager. How are you now, when

looking back, assessing the work done in the last two

years? Which project would you highlight as key to the

success of BSP in this period?

quality services enabling them to trade electricity in a

transparent and secure way. Liquidity and reliable clearing of

concluded transactions are of paramount importance for the

power exchange business. As such they are a measure of

whether we do our work well or not. The reason for the

momentum when liquidity at BSP rose was the introduction of

auction trading in March 2010. Six months after the introduction

of auction trading followed the implementation of market

coupling on the Slovenian-Italian border. Ever since then

liquidity and the number of market participants has grown. In

other words, in 2010 the volume of concluded transactions at

BSP was 0,2 TWh and 26 companies were exchange members.

Two years later the volume of concluded transactions is 4,0 TWh

and the exchange has 35 members.

BSP made this progress with active support from its owners ELES

and Borzen. Both have been liquidity providers since the setting

up of the hourly auction. Furthermore they are project parties in

Slovenian-Italian market coupling, where they are continuously

providing expert knowledge and operational support to the

project. The growth of liquidity is supported also by HSE and its

energy in a pre-defined price spread into the auction trading

order book. All of the aforementioned factors, an increased

number of market players with hourly needs for buying and

selling electricity as well as power market liberalisation have all

contributed to the success of the exchange market in Slovenia.

Can you briefly sum up current projects in the pipeline at

BSP and their compliance with EU electricity market

The formation of reliable price indices, an increased number of

market participants and a more mature electricity market have

increased expectations for services being provided by BSP. BSP's

owners and its Members Chamber suggested the introduction

of an intraday market segment and a long term contracts

projects, as you outlined, are on the way. Thereof we are actively

market coupling project in the CEE region. According to the

European Commission and ACER guidelines, the

market is scheduled for the end of 2014. This goal is

subsequently influencing our work and efforts related to the

currently applied in the CEE region on Croatia's northern

already be allocated at a coordinated auction in December;

monthly and daily PTR auctions will follow shortly. We welcome

this decision and believe that together with Croatian accession

than 30 active members, which is reflected also in current

market liquidity. Do you believe that you can also set up

liquidity comparable to the one on the day-ahead market

in other market segments? Does liquidity in the dayahead

market allow the establishment of a futures

market in Slovenia? Is there something going on with

An intraday and balancing market was introduced by Borzen,

ELES and BSP in mid-October. In the first month and a half of its

operation 154 transactions were concluded with a total volume

balancing market, we took into consideration the possibility of

its integration with neighbouring markets. Our final goal is to

enable our members, similar to the case on our day-ahead

One of the prerequisites for long term products is the formation

of reliable price indices on the day-ahead market. But there are

also many others i.e. clearing and settlement of transactions

etc. Due to the complexity of the topic we decided to conduct a

feasibility study for the introduction of these products at BSP.

Since its establishment BSP has aimed to become a

regional energy exchange in the SEE region. What steps

have been taken in this direction to date and what are

your plans for the future?

BSP has been active in the SEE region since its establishment. We

have subsidiaries in Belgrade and Skopje. Furthermore we

operationally set up continuous trading and auction trading on

the Serbian market. Since electricity trading in the region is

there is no regionally coordinated procedure for transmission

regulated and so on. These are some of the impediments

towards trade growth via power exchange. When the

we plan to reassess with our partners in the region the

possibilities of mutual cooperation on either or both (trading

on an intraday basis and balancing their position on a balancing market.

Both market segments are operated on the ComTrader Trading Platform

which is well known among European traders.

Trading is conducted 24 hours a day 7 days a week with hourly, fifteen

With the implementation of these market segments BSP joins the

concluded with block products, 3.095 with hourly products and 5 MWh

The total volume of entered orders reached 273.360 MWh in the

the 37th company group that

entered into membership at

The company will henceforth –

as the 34th participant on the

participate on the Slovenian