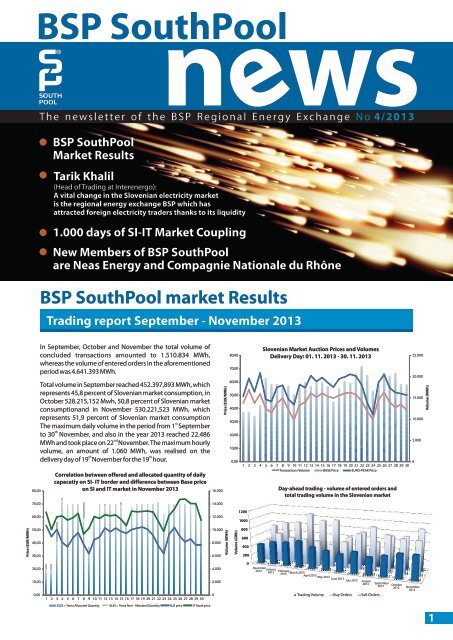 The newsletter of the BSP Regional Energy Exchange No. 4

The newsletter of the BSP Regional Energy Exchange No. 4

(Head of Trading at Interenergo):

A vital change in the Slovenian electricity market

is the regional energy exchange BSP which has

attracted foreign electricity traders thanks to its liquidity

In September, October and November the total volume of

whereas the volume of entered orders in the aforementioned

The maximum daily volume in the period from 1 September

MWh and took place on 22 November. The maximum hourly

delivery day of 19 November for the 19 hour.

Correlation between offered and allocated quantity of daily

capacatiy on SI- IT border and difference between Base price

In September, October and

MWh. In the same period a total

In September, October and

of 96 MWh was submitted for

(Head of Trading at Interenergo):

A vital change in the Slovenian electricity market

is the regional energy exchange BSP which has

attracted foreign electricity traders thanks to its

You have been present in the Slovenian electricity

market for quite some time. How do you see the changes

that have taken place in the market, and where do you

The changes that have taken place are part of market

liberalization process as a result of the EU's Second and Third

Energy Package. Similar changes are expected in other

countries of the former Yugoslavia as a result of their

membership in the Energy Community. Those changes have led

to the emergence of new electricity traders, which has boosted

competition both in the wholesale as well as the retail markets.

The newly formed competition is most pronounced through

in the Slovenian electricity market is the regional energy

thanks to its liquidity.

It has been said that energy exchanges are to be

established in Serbia and Croatia as well. How realistic do

you find these predictions, and how would the

exchanges in question affect the domestic as well as

We believe that the possibility of establishing such an exchange

in Serbia is more likely than in Croatia. With a higher number of

providers in the retail market, the latter are forced to optimise

their day-ahead demand through purchase and sale of nonstandard

“hourly products”. It is easier to purchase or sell the

latter through a power exchange. However, we must underline

that the most important factor in establishing an energy

exchange is the so-called market maker, as it can provide the

necessary liquidity of the respective exchange, thus making it

more interesting to other market participants. As regards BSP,

their continuous liquidity is ensured, besides through market

makers, also by market coupling with Italy. As for the Serbian

market, EPS (Elektroprivreda Srbije) is the only entity that would

be capable of providing adequate liquidity. The question is

whether that is in their economic interest.

The role of renewable energy sources in the electricity

market has been growing. Given their unpredictability,

the intra-day trading is more and more at the forefront.

Can we expect that in the future, liquidity of the markets

would to some extent shade into intra-day trading?

Due to their nature, i.e. being hardly predictable and unreliable,

renewable energy sources (RES) have been causing a lot of

trouble to all market participants. If we look at the matter only

from the perspective of electricity traders, the latter have been

focusing increasingly on short-term trading when the forecasts

on renewable electricity production are much more precise, and

on intra-day trading, which is on the rise and will further

strengthen with the boost of new RES generating capacity.

To read the full interview with Mr. Tarik Khalil please visit the web

A lot has been said about market coupling with regard to

short-term products at the European level. What's your

view on the respective project?

The project is urgent and must continue, as it ensures better

for better efficiency of energy markets.

power exchanges (BSP and GME) and

between Slovenia and Italy for the

Coupling is the first implicit allocation

neighboring markets in the 8 Region.

depth and traded volumes at BSP, it

allowed all spot market participants to

benefit from cross-border trade and

On the 4 of November BSP organized the Exchange Trader Training Course.

participants were addressed with information on the BSP power exchange

course for students. On the workshop students got knowledge about

Electricity market, trading, organisation and rules of energy exchange and

clearing settlement. At the end trading simulation was organised and

participants had chance to conclude their first successful deals.

The Neas Energy became the 46 and Compagnie

entered into the membership at BSP SouthPool.

The Neas Energy will henceforth as the 41 and

on the Slovenian market.