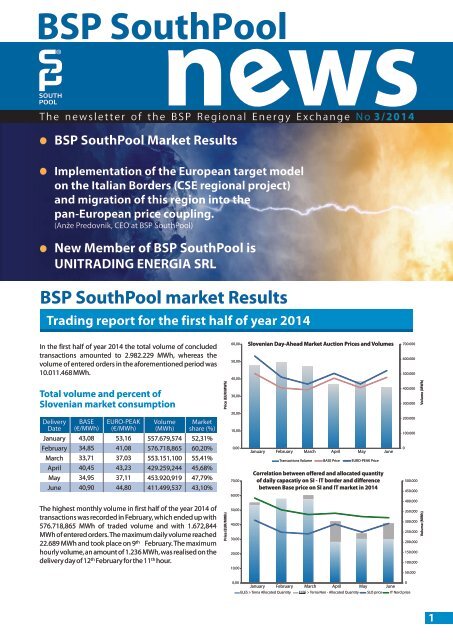 The newsletter of the BSP Regional Energy Exchange No. 3

The newsletter of the BSP Regional Energy Exchange No. 3

Implementation of the European target model

and migration of this region into the

New Member of BSP SouthPool is

Trading report for the first half of year 2014

volume of entered orders in the aforementioned period was

Total volume and percent of

transactions was recorded in February, which ended up with

hourly volume, an amount of 1.236 MWh, was realised on the

Correlation between offered and allocated quantity

of daily capacatiy on SI - IT border and difference

between Base price on SI and IT market in 2014

In first half of year 2014 the total trading

was concluded with block products, 9.579

volume of 600 MWh was submitted for

migration of this region into

between Norway and Sweden by NordPool was introduced.

and Eastern Denmark in 2000 – at this stage Nordic market

Belgium, France and the Netherlands in 2006.

Foundation of EPEX Spot by merger of the power spot

markets of the energy exchanges Powernext and European

and Omel entered into cooperation with intention to test the

concept of a pan-European price coupling known as the

and Germany was launched. Baltic Cable between Sweden

and Germany was integrated into the project in May 2010.

The tight volume coupling is operated by European Market

Netherlands, Germany and Luxemburg. In parallel a project

NordPool to Estonian bidding area via Estlink cable as of

based on the market coupling mechanism has been

In January 2011 Slovenian-Italian market coupling was

launched. Later on in mid-January 2011 the NorNed cable

between Norway and the Netherlands was added to the

In June 2012 Lithuanian power market was taken over by

In June 2013 Latvian power market was taken over by Nord

project is the first important milestone in the setup of the

power markets based on price coupling of regions

countries, the Baltic countries, and the SwePol link between

(SWE region) were included into the pan-European price

Finland are fully coupled and by that significant step towards

the completion of the integrated European power market is

Implementation of the European target model on the Italian

Borders (CSE regional project) and migration of this region

into the pan-European price coupling.

Implementation of the European target model in the CEE

region and it's migration into the pan-European price

The process of pan-European electricity market

integration is well underway. How does Slovenian

market shall be established with integration of regional market

supported by the European Commission and based on

experience in market coupling projects dating back to midnineties

(see timeline in box 1), the EU regional initiatives and

full developing phase. The process of formation of pan-

European electricity market is also facilitated by the Third

Package and the commitment of EU member states to

accomplish the integration of the Internal Energy Market by

stepped into international power market with introduction of

market coupling on Slovenian-Italian border in 2011. Through

In context of formation of pan-European electricity market a

dedicated project of CSE region and its migration into price

coupling of regions (PCR) project was launched by regulators of

Based on aforementioned the relevant project parties of the SI-

confirmed to their respective market participants the

commitment to assure the operational continuity of the dayahead

allocation process when switching from the already

The PCR solution has been developed by European

power exchanges to provide a single algorithm and

calculation and use of European cross-border

coupling processes need to be harmonized for a

bilateral market coupling project on the SI-IT border to

European electricity market. How will BSP tackle these

project in the formation of High Level Business Process

operational procedures and developing the required IT changes

as well as assuring that the required regulatory changes in

different countries will be applied) and in the formation of

detailed implementation plan, which have been both

successfully approved by all the national regulatory authorities.

In line with commitments made in HLBP and implementation

market data with PCR solution through partnership with PCR

regulatory changes (for example: the alignment of day-ahead

2014, we could understand that Design Phase of CSE

project has finished (upon being approved by CSE NRA`

Implementation Phase. When can we expect finalisation

of the Implementation Phase and go-live of the CSE

February 2015. I would like to emphasise at this point that CSE

project parties have agreed at the very beginning of the project,

in order to avoid delays in the regional implementation, that

different Italian borders depending on their respective technical

readiness. The list of borders starting first and final Go-live

window will be communicated to the market participants and

general public in October and November 2014.

In addition to the project of CSE region BSP is involved

also in the project of CEE region and its migration with

NWE region, which was launched by joint declaration of

regulators of CEE region and ACER in May 2012. Austrian-

Slovenian border is part of this project. In what stage is

the CEE project? Will be Slovenian organized exchange

market coupled on this border in parallel with CSE

national regulatory authorities of CEE region together with

ACER have signed in February 2014 a joint Memorandum of

Understanding for the CEE project. Based on MoU the countries'

Slovakia and Slovenia) shall be coupled by using a flow-based

method for calculating the capacities on the cross-border

electricity interconnectors and by implicitly allocating these

capacities based on the price coupling of regions (PCR) project

solution. Furthermore the MoU expresses the intention of the

concerned TSOs and PXs to continue and intensify their

cooperation in the Central-Eastern Europe (CEE) region. The Golive

of CEE project will be assessed in the implementation plan

prepared within the Design Phase of the CEE project. Upon

being approved by the CEE project parties the expected Go-live

date will be communicated to the market participants. The

timeframe of Go-live window for CEE project might not overlap

with the Go-live window of CSE project, but we have to take into

consideration that we are discussing two separate EU Regional

Initiatives, which necessarily implies that there might be some

mismatch in timings of their integration into pan-European

electricity market. Nevertheless as mentioned before the

signed MoU expresses the intention of the concerned TSOs and

PXs to intensify the CEE project by which the mismatch in

timings shall be reduced to the higher possible degree.

of May 2014 in Portorož. The new Exchange

Bodies within the Member Chamber were elected.

The outcome of the elections:

Chairman of the Members Chamber:

Vice-Chairwoman of the Members Chamber:

Chairman of the Slovenian Market Committee:

Vice-Chairman of the Slovenian Market Committee:

· Introduction of negative prices and block

products in the Day-ahead market.

May the traders and other BSP SouthPool

partners had opportunity to meet each at the BSP Traders'

Party at Club Pergola in Portorož.

of June BSP organized the

participants were attending the course - one

from HEP-OPSKRBA d.o.o. and one individual

were addressed with information on the BSP

The next Exchange trader training course

All details about the training are available on

is a new member of BSP SouthPool

BSP Regional Energy Exchange has 49 members at the moment: Alpiq