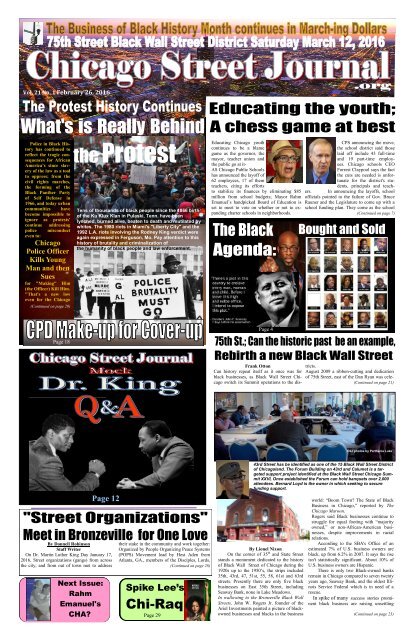 Who is really behind the protest.

What's is Really Behind

of the law as a tool

to oppress; from the

the forming of the

of Self Defense in

(the Officer) Kill Him.

even for the Chicago

Tens of thousands of black people since the 1866 birth

of the Ku Klux Klan in Pulaski, Tenn. have been

lynched, burned alive, beaten to death and mutilated by

again expressed in Ferguson, Mo. Pay attention to this

history of brutality and criminalization of

the humanity of black people and law enforcement.

continues to be a blame

game as the governor, the

the public go at it-

has announced the layoff of

to stabilize its finances by eliminating $85

Emanuel’s handpicked Board of Education is

set to meet to vote on whether or not to expanding

the school district said those

laid off include 43 full-time

the cuts are needed is unfortunate

for the district's students,

In announcing the layoffs, school

officials pointed to the failure of Gov. Bruce

Rauner and the Legislature to come up with a

school funding plan. They come as the school

Can history repeat itself as it once was for

switch its Summit operations to the districts.

August 2009 a ribbon-cutting and dedication

of 75th Street, east of the Dan Ryan was cele-

2016, Street organizations (gangs) from across

the city, and from out of town met to address

their stake in the community and work together:

of Chicagoland. The Forum Building on 43rd and Calumet is a targeted

XXVI, Once established the Forum can hold banquets over 2,000

attendees. Bernard Loyd is the owner in which seeking to secure

On the corner of 35 th and State Street

stands a monument dedicated to the history

of Black Wall Street of Chicago during the

streets. Presently there are only five black

businesses on East 35th Street, including

Seaway Bank, none in Lake Meadows.

In wallowing to the Bronzeville Black Wall

businesses and blacks in the business

Business in Chicago,” reported by The

struggle for equal footing with “majority

despite improvements in racial

According to the SBA's Office of an

estimated 7% of U.S. business owners are

isn't statistically significant. About 10% of

There is only two Black-owned banks

years ago, Seaway Bank, and the oldest Illinois

Service Federal which is in need of a

In spike of many success stories prominent

Magazine: Who is really behind the protest.