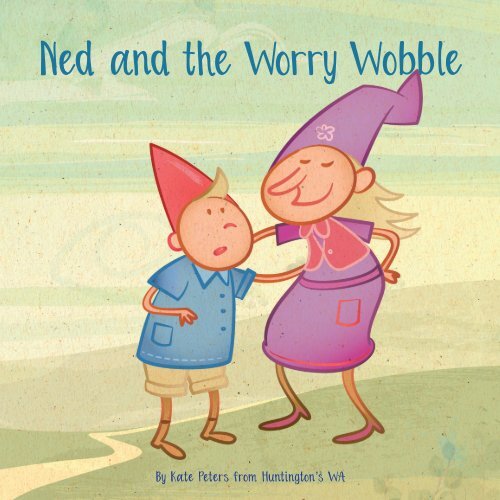 Ned and the Worry Wobble

Ned and the Worry Wobble

By Kate Peters from Huntington’s WA

The story of Ned and Norma Gnome

through Perpetual’s Philanthropy Trust and the Gaming Community Trust WA

Out in the bush, in the hollow of a gumtree,

a Gnome Mob from West country.

Ned the Gnome, the youngest at nine,

wore a red hat, brown boots and a

Our Ned was a bit of a worrier,

his Mum would often sing out and say,

(in of course her kindly way)

Ned knew then to get up and about,

As things go for Gnomes - despite the strife,

Ned knew he had a pretty good life,

but of all Ned’s favourite things to do,

the winner was reading with Aunty it’s true.

That night he heard Mum and Dad quietly talking,

something about Aunty Norma dancing while walking...

out the corner of his eye...

Aunty Norma he did spy!

“Mummy please - do a deep breath

we heard you last night

So what’s going on?

and where is he from?”

and have a few chats,

“The yarn starts way back with your Great Uncle Norman

they say he worked FIFO - an iron ore foreman.

Anyway he’s the first one we knew with the Huntington’s gene,

it’s nobody’s fault, and it’s not where you’ve been,

It’s in our genes, we cannot but help it,

it’s hard to handle but we shouldn’t just shelve it.”

Yes, there are lots of questions you can ask,

from people you trust - that’s their task.

And if Mummy and Daddy don’t know the answers,

about why Huntington’s makes us dancers.

You can call or message, even write a letter,

to us at the Gnome office -

In the meantime we live with cuddles and kisses,

We keep talking and learning and are full of good wishes.

Huntington’s no secret, they can join up some dots.

We’ll own our story - our family yarn,

the family will know and can all learn.

Use these quiz questions to discuss

themes of this story with your child.

Why was Aunty Norma

How does Ned make himself

What is a genome?

How does Ned help Aunty

Were there really butterflies

Possible responses from your child and

themes to talk about

• Ned is worried or stressed out

• It’s a frown on his forehead

• Because she’s getting old

• Because of the Huntington’s in her

• He does fun things he loves

• He goes outside and digs

• He waters his garden

• He has a cuddle with family

• Genes/genomes are in our bodies

• We get some from our Mum

• We get some from our Dad

This makes us look a bit like each other

• They read books together

• They listen to music and dance

• No, it means he felt tickles and twitches

• It was because he was scared/worried/

• It’s the body’s way of telling us something

Huntington’s WA can be contacted by phone or email.

Or send us a letter:

Or you can learn more at:

Magazine: Ned and the Worry Wobble