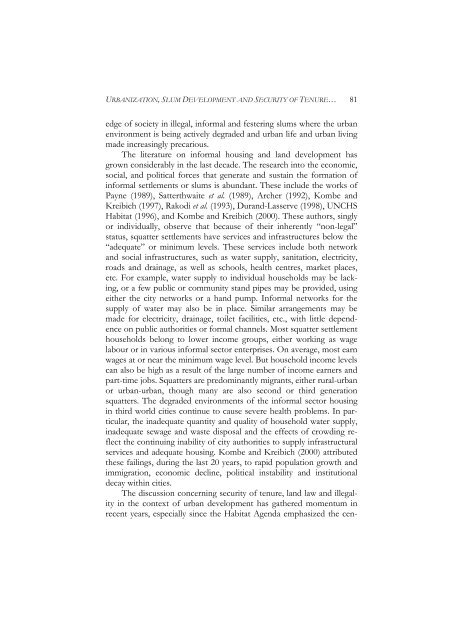 edge of society in illegal, informal and festering slums where the urban

The literature on informal housing and land development has

grown considerably in the last decade. The research into the economic,

social, and political forces that generate and sustain the formation of

informal settlements or slums is abundant. These include the works of

or individually, observe that because of their inherently “non-legal”

status, squatter settlements have services and infrastructures below the

“adequate” or minimum levels. These services include both network

and social infrastructures, such as water supply, sanitation, electricity,

etc. For example, water supply to individual households may be lacking,

or a few public or community stand pipes may be provided, using

either the city networks or a hand pump. Informal networks for the

supply of water may also be in place. Similar arrangements may be

made for electricity, drainage, toilet facilities, etc., with little dependence

on public authorities or formal channels. Most squatter settlement

households belong to lower income groups, either working as wage

labour or in various informal sector enterprises. On average, most earn

wages at or near the minimum wage level. But household income levels

or urban-urban, though many are also second or third generation

squatters. The degraded environments of the informal sector housing

in third world cities continue to cause severe health problems. In particular,

the inadequate quantity and quality of household water supply,

inadequate sewage and waste disposal and the effects of crowding reflect

the continuing inability of city authorities to supply infrastructural

these failings, during the last 20 years, to rapid population growth and

The discussion concerning security of tenure, land law and illegality

in the context of urban development has gathered momentum in

recent years, especially since the Habitat Agenda emphasized the cen-

Magazine: urbanization, slum development and security of tenure - Center for ...