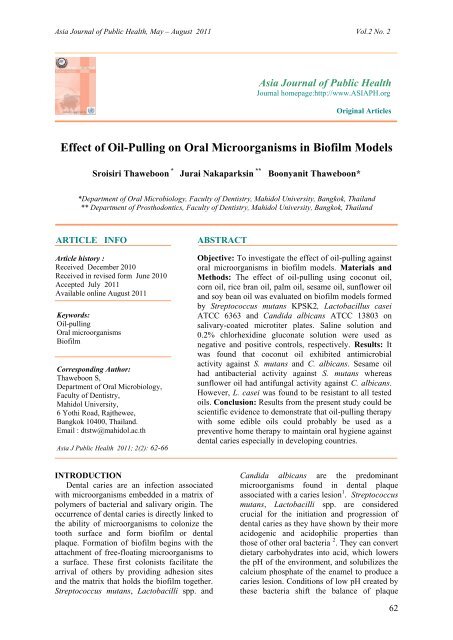 Dental caries are an infection associated

with microorganisms embedded in a matrix ong>

the ability ong> microorganisms to colonize the

a surface. These first colonists facilitate the

and the matrix that holds the biong>ilm together.

Objective: To investigate the effect ong> oil-pulling against

and soy bean oil was evaluated on biong>ilm models formed

0.2% chlorhexidine gluconate solution were used as

had antibacterial activity against S. mutans whereas

However, L. casei was found to be resistant to all tested

oils. Conclusion: Results from the present study could be

with some edible oils could probably be used as a

Candida albicans are the predominant

associated with a caries lesion 1 . Streptococcus

crucial for the initiation and progression ong>

dental caries as they have shown by their more

acidogenic and acidophilic properties than

those ong> other oral bacteria 2 . They can convert

dietary carbohydrates into acid, which lowers

the pH ong> the environment, and solubilizes the

calcium phosphate ong> the enamel to produce a

microng>lora and favor the proliferation ong>

which the practitioners swish or rinse oil in

their mouth for oral health benefit to prevent

dryness ong> the throat and cracked lips 3 . In

addition, this simple method is claimed to cure

many diseases ranging from thrombosis,

eczema, intestinal infection, and diabetes, to

bronchitis and asthma 3 . This procedure is

typically performed daily by sipping or

sucking oil and pulling it between the teeth for

1-10 min before brushing. The oil will turn

thin and milky white. This should be followed

by brushing the teeth and is preferably done on

an empty stomach in the morning. Scientific

evidence shows that oil-pulling therapy could

scores and the total oral bacteria count in

gingivitis patients 4-5 . Moreover, it can

susceptibility to slight or moderate

Therefore, the aim ong> the present study was

to investigate the effect ong> oil-pulling against

All ong> the oils used in the present study

were Thai products. They included: coconut

The tested microorganisms were obtained

from the culture collections ong> the Department

were as follows: Streptococcus mutans

Candida albicans ATCC 13803. They were

agar. The broth was incubated overnight at 37

°C. Inocula were prepared by diluting

overnight cultures with saline to

approximately 10 8 CFU/ml for bacteria and

10 7 CFU/ml for yeast. These suspensions were

The effect ong> the oils was evaluated on

al 8 . Briefly, all microorganisms were

cultivated in a fluid thioglycolate medium

glucose for seven hours. Each microbial

suspension (10 6 CFU/ml) was combined and

after eating, drinking or having a hygiene

procedure. The pooled saliva was centrifuged

supernatant was filtered through a 0.45 mpore

Absence ong> any viable microorganisms in the

saliva was checked by culturing on blood agar.

Salivary components were absorbed onto

temperature to form an acquired pellicle. After

plates were inoculated with a mixture ong>

in each well ong> the microtiter plate was 10 5

CFU/ml. The microtiter plates were then

incubated at 37C for twenty-four hours under

Saline solution and a 0.2% chlorhexidine

gluconate solution were used as negative and

were exposed to controls or the tested oils for

1 min. During this time the fluid was pulled up

and down 20 times. Then the oils and

unattached cells were removed and the

biong>ilms were washed three times in PBS, and

then scrapped and sonicated. Serial dilutions

All experiments were performed in

triplicate and results were expressed as mean +

differences between mean values obtained for

the experimental groups were analyzed by

less than 0.05 was taken as statistically

and C. albicans were prepared and then

exposed to the tested oils for 1 min. Responses

to different oils are summarized in Table 1.

reduction) and sunflower oil had antifungal

For chlorhexidine, which was used as a

casei was found to be resistant to all tested

ong>-pulling therapy with sesame oil or

sunflower oil has been extensively used as a

It is claimed to have advantages over

commercial mouthwashes since it causes no

staining, has no lingering after taste, causes no

allergic reactions and is readily available in the

action are not known. It has been proposed,

however, that the viscosity ong> the oil can

coaggregation 6 . The other possible mechanism

as a result ong> alkali hydrolysis ong> oil by

bicarbonates in saliva 9 . These soaps are good

Sufficient scientific research has not been

carried out to evaluate the beneficial effect ong>

oil pulling therapy on oral health and this

needs to be addressed. This study was

§ chlorhexidine was used as positive control

In the present study it was found that

against S. mutans and C. albicans whereas

sesame oil had activity against S. mutans and

Other oils such as corn oil, palm oil, rice bran

Coconut oil has a unique role in the diet as

Besides the health and nutritional benefits,

coconut oil has been shown to have anticarcinogenic

What makes coconut oil different from most

other dietary oils are the basic building blocks,

or fatty acids, making up the oil. The

ong> common edible fats in our diet are

acids. This influences the physical and

coconut oil has been reported since 1982 by

Hierholzer and Kabara 12 . This early research

was directed at the virucidal effects because ong>

Recently, results from many studies revealed

that monolaurin, the monoglycerides ong> lauric

acid from coconut oil had antimicrobial

activity against various gram positive and

stellatoidea and C. krusei 16 , as well as

images showed that 15 minutes exposure to

confirm the efficacy ong> coconut oil in the

aureus from colonized skin lesions 15 . In

addition, soap made from coconut oil had

coli 19 . Though the exact antibacterial

unclear, it was hypothesized that monolaurin

and other medium chain monoglycerides had

enzymes involved in energy production and

nutrient transfer, leading to the death ong> the

bacteria 15 . In the case ong> viruses, the virucidal

effects ong> monolaurin appeared to be that ong>

solubilizing the lipids and phospholipids in the

Sesame oil was demonstrated to have

antibacterial activity against S. mutans. It

adolescents within one week 6 . In accordance

with these previous investigations, our result

ong>-pulling therapy with sunflower oil was

count reduction were not statistically different.

To our knowledge, little information regarding

infections than are control infants 21-22 . This

may be the result ong> skin barrier enhancing

effects, or some antimicrobial actions ong> the

properties ong> the ozone itself.

bran oil and soy bean oil, it was proposed that

lauric acid, in these oils may play a role in

In conclusion, results from the present

study could be scientific evidence to

demonstrate that oil-pulling therapy with some

edible oils could be used as a preventive home

are needed to investigate the mechanisms ong>

the action ong> the oil on these microorganisms

or dental plaque, as well as long-term effects

biong>ilms ong> oral bacteria as an enamel and

Of monolaurin compounds on enveloped

against organisms from skin infections: an

Gonorrhoeae to fatty acids and monogly-

and milk-borne cytomegalovirus in vitro. J

on the efficiency ong> antibiotic soap made

microbicidal lipids in host defense against

pathogens and their potential as therapeu-

mial infections in preterm infants in

Magazine: Effect of Oil-Pulling on Oral Microorganisms in Biofilm Models