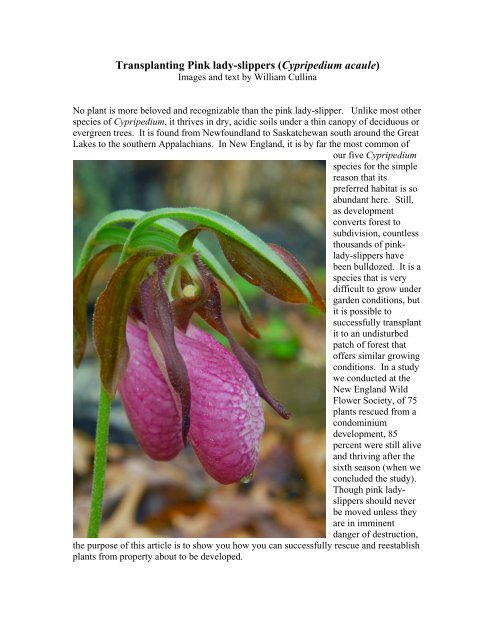 Images and text by William Cullina

No plant is more beloved and recognizable than the pink lady-slipper. Unlike most other

species of Cypripedium, it thrives in dry, acidic soils under a thin canopy of deciduous or

evergreen trees. It is found from Newfoundland to Saskatchewan south around the Great

Lakes to the southern Appalachians. In New England, it is by far the most common of

species for the simple

preferred habitat is so

been bulldozed. It is a

species that is very

difficult to grow under

it is possible to

it to an undisturbed

patch of forest that

conditions. In a study

we conducted at the

plants rescued from a

and thriving after the

sixth season (when we

be moved unless they

plants from property about to be developed.

germination. Orchid seeds are tiny and lack well developed embryos. To germinate, the

surrounds the seed as if to digest it.

penetrate the seed and then the

orchid turns the tide, digesting the

fungus instead. It seems that the

fungus gets nothing from this

arrangement except to be eaten, so

rather than the symbiotic

relationship found with most

case the union is more properly

years in the soil growing larger at

the expense of the fungus, the seeding emerges and begins to photosynthesize for its

food. At this point, it is unclear how important the

years after a bad drought, predation, or other

trauma, so it does appear that some continued

relationship is important to the health of the plant.

years then disappeared, only to appear and bloom

in 2007 as a two-leaved but non-flowering plant!

Just how widespread the proper group of fungi is

through the range of the orchid is unclear, but

does not necessarily mean there is no fungus

present. The most important consideration when

choosing a spot for relocation is the pH of the soil,

the available light, and potential competition from

other plants. The pH of the soil is important

because unless the soil is extremely acidic, C. acaule is prone to attack by root diseases

that are naturally suppressed at low pH. Soils with a pH below 5.0 are optimal. You can

habitat (obviously, if pink lady-slippers grow there already, it is ideal). In our area of

are common canopy species in pink lady-slipper habitat. Some indicator plants to for at

Pink lady-slippers do poorly in deep shade, and this is the most common reason they

disappear over time from a given woods. They are most abundant in either very old

fire. Road cuts and other edge habitats are also good places to find them. I look for

plants rather than in total shade under a continuous canopy.

This is especially important under evergreens. Look for places where the sun breaks

through for an hour or so each day.

Chose areas where the ground is reasonably free of competition. Here huckleberries,

habitat. I will site the plant just in front of the dead branch in the center.

Though in an emergency, you can successfully move pink lady-slippers at any time

during the growing season, I have had the best results when I moved them in late summer

just as the leaves begin to yellow. This plant flowered earlier in the season, but deer

nipped of the bloom stalk. C. acaule’s roots are very shallow and spread out from the

crown 8-24 inches in all directions, so care must be taken to damage them as little as

I use a pitchfork to lift the roots gently, coming in

at a shallow angle about 12 inches from the crown

and rocking the fork until the crown lifts up. At

this point I use my hands to help tease the roots free from tree roots and debris. Here the

long as you have

are stained by humic acids in the soil but still healthy. The white roots are younger.

one at the left. Notice that this second root has lost its tip and can grow no

organ for the plant during dormancy. If roots are cut or damaged during

transplant, they will stop growing and be vulnerable to infection. The loss of more than a

few can spell disaster for the plant, as it has lost a good share of its food reserves and will

likely wither away over the next year or two. This is a common occurrence in gardens,

where a rescued or wild-collected plant will come up the first year, come back smaller the

next, and fail to return the third. C. acaule’s roots inhabit what is called the F horizon in

is the zone or

rot if buried in

I use a digging spade to scrape away the H horizon,

exposing but no removing the lighter A horizon beneath.

(H horizon) you just scraped off

around the root mass (if the plant is

bare-root, be extra careful to work the

material in, around and between the

roots so as they are spread out).

In this image, a bare-root plant has been set at the proper depth and is ready to be

Set the plant so that the tip of the white, pointed bud evident in this image lies just below

the surface when you are finished.

The finished plant with

back over the roots once

they have been backfilled

with duff. By choosing a

the soil horizons as little

as possible and locating

the roots at the proper

depth, I have maximized

this plant’s chances for

success. Other than a

good watering or two to

settle the soil, no

The same plant the following spring with healthy leaves but no flowers. They are stiff

and just pale enough to let me know they are receiving enough light.

Again, the same plant in its second spring, now with two growths and a beautiful bloom –

both signs that it is settled in and thriving! Notice how the wintergreen in the first picture

has spread beyond the dead branch and around the plant as it heads toward the light.

<strong>Transplanting</strong> <strong>Pink</strong> <strong>lady</strong>-<strong>slipper</strong>s (<strong>Cypripedium</strong> <strong>acaule</strong>) Images and text by <strong>William</strong> <strong>Cullina</strong> No plant is more beloved and recognizable than the pink <strong>lady</strong>-<strong>slipper</strong>. Unlike most other species of <strong>Cypripedium</strong>, it thrives in dry, acidic soils under a thin canopy of deciduous or evergreen trees. It is found from Newfoundland to Saskatchewan south around the Great Lakes to the southern Appalachians. In New England, it is by far the most common of our five <strong>Cypripedium</strong> species for the simple reason that its preferred habitat is so abundant here. Still, as development converts forest to subdivision, countless thousands of pink<strong>lady</strong>-<strong>slipper</strong>s have been bulldozed. It is a species that is very difficult to grow under garden conditions, but it is possible to successfully transplant it to an undisturbed patch of forest that offers similar growing conditions. In a study we conducted at the New England Wild Flower Society, of 75 plants rescued from a condominium development, 85 percent were still alive and thriving after the sixth season (when we concluded the study). Though pink <strong>lady</strong><strong>slipper</strong>s should never be moved unless they are in imminent danger of destruction, the purpose of this article is to show you how you can successfully rescue and reestablish plants from property about to be developed.