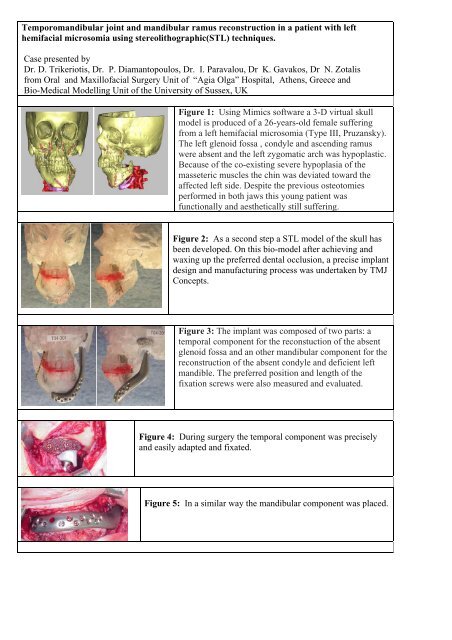 Temporomandibular joint and mandibular ramus reconstruction in a patient with left

from Oral and Maxillofacial Surgery Unit of “Agia Olga” Hospital, Athens, Greece and

Bio-Medical Modelling Unit of the University of Sussex, UK

model is produced of a 26-years-old female suffering

were absent and the left zygomatic arch was hypoplastic.

Because of the co-existing severe hypoplasia of the

masseteric muscles the chin was deviated toward the

affected left side. Despite the previous osteotomies

performed in both jaws this young patient was

Figure 2: As a second step a STL model of the skull has

been developed. On this bio-model after achieving and

waxing up the preferred dental occlusion, a precise implant

design and manufacturing process was undertaken by TMJ

Figure 3: The implant was composed of two parts: a

temporal component for the reconstuction of the absent

glenoid fossa and an other mandibular component for the

reconstruction of the absent condyle and deficient left

mandible. The preferred position and length of the

Figure 4: During surgery the temporal component was precisely

and easily adapted and fixated.

Figure 5: In a similar way the mandibular component was placed.

Figure 6: Patient's photos : 6a. Before reconstruction and

6b. After reconstruction without left chin deviation.

Intermaxillary fixation was applied for two weeks after

Figure 7: A month after surgery there was no deviation during the

opening position. A more effective masticatory function and a more

CONCLUSION: Using the STL model in this patient with hemifacial microsomia the

disturbed anatomy of the facial skeleton was thoroughly studied. A complex preoperarive

high accuracy. During surgery both implant components were safely fixated on the anatomical

sites without any need for further manual adaptation. This would never been possible without

the making of a STL model. Also, less surgical time and tissue stress were observed.