The extent and cause of parsnip canker - Vegetable Growers ...

The extent and cause of parsnip canker - Vegetable Growers ...

HAL Report VG05045Horticulture Australia Project No:Project Leader:Contact Details:Project Team:Address:VG05045Dr Elizabeth MinchintonDepartment of Primary Industries, Knoxfield CentrePrivate Bag 15, Ferntree Gully DC, Victoria 3156Tel: (03) 9210 9222Fax: (03) 9800 3521Email: liz.minchinton@dpi.vic.gov.auDesmond Auer, Fiona Thomson and Slobodan VujovicDepartment of Primary Industries, Knoxfield Centre,Private Bag 15, Ferntree Gully DC, Victoria 3156.Purpose of project:This report details the outcomes of a 24-month project investigating parsnip canker. This project carried outsurveys to investigate both the cause and extent of parsnip canker in Victoria, Western Australia and Tasmania.Report completed: January 2008Funding acknowledgmentsThe researchers acknowledge the financial support for this project from Horticulture Australia Limited (HAL),AUSVEG, the Federal Government and the Department of Primary Industries.AcknowledgmentsWe acknowledge the financial contributions from the National Vegetable Levy (AusVeg), Horticulture Australia(HAL) and the Federal Government. We thank participating growers Peter, Darren and Paul Schreurs; RussellLamattina, Joe Kelly, and Silvio and Glenn Favero for supplying field sites and advice. We also thank MarkMilligan and Karl Riedel for their helpful discussions. The input of past and current state IDO’s is gratefullyacknowledged, including Alison Anderson (NSW), David Ellement (Western Australia), Craig Feutrill (SouthAustralia), Craig Murdoch (Victoria) and Stephen Welsh (Tasmania).DisclaimerThis publication may be of assistance to you but the State of Victoria and its officers do not guarantee that thepublication is without flaw of any kind or is wholly appropriate for your particular purpose and thereforedisclaims all liability for any error, loss or other consequence which may arise from you relying on anyinformation in this publication.Any recommendations contained in this publication do not necessarily represent current Horticulture Australiapolicy. No person should act on the basis of the contents of this publication, whether as to matters of fact oropinion or other content, without first obtaining specific, independent professional advice in respect of thematters set out in this publication.© State of Victoria, Department of Primary Industries, 2008

HAL Report VG05045Media SummaryGround breaking research into parsnip canker in AustraliaScientists have taken the first step in determining the cause and extent of parsnip canker inAustralian parsnip production. Parsnip canker can cause crop losses up to 80 %. Parsnip is along-term crop, harvested after 5–7 months. It is a difficult crop to grow and there are fewmajor growers in Australia. Victoria produces over 80 % of the total parsnip production inAustralia.Surveys of parsnip canker at harvest in 2006 and 2007 showed that canker levels peakedbetween September and November, on crops sown in February to March. The peak averagelosses due to canker for this period were 45 % for 2006 and 23 % for 2007. This represents apotential loss of A$3 million for the parsnip industry over the two years.Several fungi were isolated from cankers and there was strong evidence that the debilitatingdisease is caused by more than one organism. The fungi isolated included Itersoniliaperplexans, the main cause of this disease overseas, and fungi such as Cylindrocarpon spp.,Fusarium spp., Mycocentrospora acerina, Pythium spp. and Rhizoctonia spp.Observations in the field, as well as laboratory studies, indicated that superficial damage tothe roots predisposed parsnips to fungal attack and canker.Symptoms of parsnip canker are large black lesions on mature parsnip roots, mostly on theshoulder or crown that can spread to other sections of the root and in extreme cases, cover theentire root, making the product unusable.Information resulting from this research was presented in conference posters, at SteeringCommittee meetings and field days.This research was led by scientists at the Department of Primary Industries VictoriaKnoxfield Centre. The project was facilitated by Horticulture Australia Limited (HAL) inpartnership with Federation of Potato and Vegetable Growers Australia Limited (AUSVEG)and was funded by the National Vegetable Levy. The Australian Government providesmatched funding for all of Horticultural Australia’s Research and Development activities. Theresearchers gratefully acknowledge the financial support of the Department of PrimaryIndustries through Primary Industries Research Victoria.2

HAL Report VG05045Technical summaryLittle or no research into parsnip canker has been undertaken in Australia despite the fact thatgrowers have reported persistent crop losses in spring-harvested crops of up to 80 % for 40years.This 24 month scoping study: Surveyed parsnip crops in the major cropping regions of Victoria, Tasmania and WesternAustralia to identify the extent of parsnip canker affecting production; Identified the causes of parsnip canker in Victorian crops by conducting pathogenicitytests (Koch’s postulates) on fungi isolated from cankers; Used field trials to confirm pathogen trials; Determined that root damage predisposed parsnip roots to canker.Systematic surveys involving four growers in Victoria, as well as one in Tasmania and two inWestern Australia showed that parsnip canker was a major problem in Australia. In Victoria,where 80 % of Australian parsnips are grown, parsnip canker accounted for losses of up to 45% in spring-harvested crops, and in one case, losses were over 85 %. This represented apotential loss of A$3 million for the parsnip industry over two years.Pathogenicity tests were conducted on fungi that were consistently isolated from diseasedparsnip roots in Victoria. The confirmed overseas pathogens Itersonilia perplexans,Cylindrocarpon spp., Mycocentrospora acerina and Phoma spp. all caused canker-likesymptoms on fresh parsnip roots. Other fungi such as Acremonium spp., Fusarium spp.,Microdochium spp., Pythium spp. and Rhizoctonia spp. caused similar lesions. Pathogen trialsalso established that root damage predisposed parsnip to pathogen attack.Trials involving growers’ own seed and a commercial variety, Tusk, showed that there waspotential to alleviate canker levels using resistant cultivars. The use of Tusk reduced cankerlevels by 45 % compared to some of the growers’ own seed stocks.The effectiveness of metalaxyl-m in one out of three trials, in reducing canker incidence by77 %, reinforced the notion of root damage contributing to parsnip canker. In a second trial,metalaxyl-m reduced canker incidence by 34 %, although, in this case, it was not significantlydifferent from the control. These results, as well as the pathogen tests, indicate that oomycetefungi such as Pythium spp. may have a role in predisposing parsnip roots to canker.Future directionsOur research has increased knowledge of parsnip canker but it has revealed how little weknow about this disease complex.Future investigations need to determine the: Predisposing nature of Pythium species and other pathogenic fungi; Biological succession of fungi on parsnip root to determine the time of initialinfection, by microbiological sampling; Influence of predisposing abiotic factors such as soil moisture, temperature, pH,nutrients and fertilization on canker development; Initiation of field infections, using targeted fungicides; Cultural, biological and alternative soft chemical controls.3

HAL Report VG05045Chapter 7Technology transfer and recommendationsSummaryThis chapter reports the benefits of a project advisory group established to oversee research projects.This group increased communication and cooperation between growers, researchers and allied supportbusinesses and resulted in an accelerated impact of research and development within the parsnipindustry. Recommendations for future research are presented.7.1 IntroductionThe research reported herein is the result of collaboration between parsnip growers, industry advisorygroups and project steering committees. These groups consisted of vegetable growers, cropconsultants and chemical resellers, with diverse experiences which they brought to the project. Thegroups provided an opportunity for researchers to describe their approach and current progress thuspromoting the impact of research and development projects. The advisory groups also enabledgrowers and allied industries to ensure that their needs were being met by the research project. Theadvisory group approach worked very well and is DPI’s preferred method of involvement with thevegetable industry. This interaction and collaboration with growers and vegetable industrydevelopment officers (IDOs), along with the subcontracting of sections of work to industry expertshas been of enormous benefit to the project. The IDOs identified parsnip growers in other states. Theadvisory committee encouraged the researchers to promote results of the research to growersnationally in industry publications.7.2 Industry advisory groupThe Department of Primary Industries Victoria took the approach of inviting growers and privateallied support business representatives to volunteer their time and join with researchers to plan anddiscuss parsnip disease issues first hand. Not all growers were in the position of being able tovolunteer their time due to the demands of growing and marketing vegetables and consequently theresearchers are extremely grateful to those who were able to contribute. The parsnip growers werevery supportive of the project and provided many field sites for trials, which was enormouslyappreciated by the researchers.The advisory group members who supported project VG06046 were:Silvio and Glenn Favero – Market Gardeners, Hillcrest Farm, Cranbourne, Vic.Peter, Darren and Paul Schreurs – Market Gardeners, Peter Schreurs and Sons, Devon Meadows, Vic.Karl Riedel – Vegetable Crop Agronomist, EE Muir and Sons, Cranbourne, Vic.Russell Lamattina – A and G Lamattina and Sons Market Gardeners, Boneo, Vic.Mark Milligan – Farm Manager, A and G Lamattina and Sons Market Gardeners, Boneo, VicRoss Arnott – Market Gardener, R, C, G, and D Arnott, Boneo, Vic.Joe Kelly – Market Gardener, Tullamore Gardens, Cranbourne, Vic.Glenn Moore - Market Gardener, Scottsdale, TasCarlo Galati - Market Gardener, Galati Produce, Anketell, WA.Figaro Natoli - Market Gardener, Natoli Produce Farms, Wanaroo, WA.7.3 Dissemination of information to industryThe current project was enthusiastically received by all growers and new insights into this devastatingdisease were gleaned. Adults acquire information in different ways such as reading, talking and visualcues. Some forms of information distribution will be more useful or accessible than others. There aremany methods for distributing information to growers, such as field days, industry publications,43

HAL Report VG050457.4 RecommendationsThe major recommendations to growers from this work are: Long-term management of the disease may rely on resistant cultivars.On specific sites, 2 applications of metalaxyl may be effective for controlling parsnip canker.The influence of metalaxyl on canker incidence suggests water moulds (oomycetes) are involvedin the development of parsnip canker, but not consistently at all sites.Avoid planting parsnips in February. Parsnip canker levels were high in spring-harvested crops,representing crops sown in February–March. This reiterated previous anecdotal evidence fromparsnip growers.Itersonilia perplexans is not the only fungus responsible for parsnip canker in Australia, with thepossibility of a consortium of fungi being responsible. The complexity of the problem highlightsthe need for a more holistic approach to the management of this disease.Areas of future research which would benefit the industry are:Future research needs to have a national focus due to the extent of parsnip canker in southernAustralia. We suspect that a complex of organisms is responsible for parsnip canker in Victoria, withthe water moulds, such as Pythium spp., having a leading role in predisposing parsnips to canker. Wealso suspect soil moisture, soil temperature, pH and nutrients may have an influence on cankerdevelopment. Future work on canker should be aimed at how and when the disease is occurring,conditions promoting it, control options including IPM, as well as extension.Areas of future research of benefit to industry should:Determine if combinations of pathogens, such as Pythium spp., are predisposing parsnips tocanker.Determine the influence of pH, nutrients and irrigation on parsnip canker, as they could bepredisposing parsnips to canker.Establish the electrotaxic behaviour of Pythium zoospores, as Ca ++ interferes with root infectionby zoospores.Establish when canker first attacks the crop and tailor control measures to this time.Establish optimal seed treatment regimes.Test a range of biocontrols for efficacy against canker.Test parsnip cultivars for canker tolerance under a wider variety of conditions, nationally.Identify cultural, biological and alternative soft chemical controls.Conduct systematic surveys for carrot rust fly as it is a biosecurity issue.Develop a national management strategy for parsnip canker and ensure it is economical.Benchmark control measures and establish the economics of IPM strategiesProduce and publish a user-friendly protocol on best practice integrated management of parsnipcanker.47 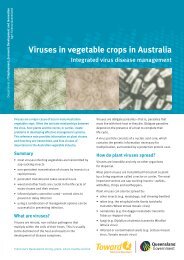 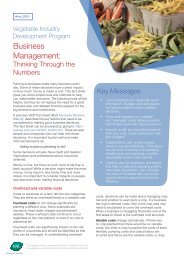 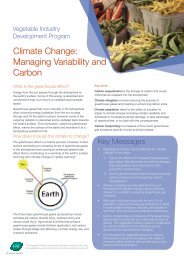 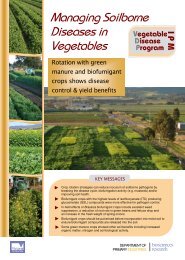 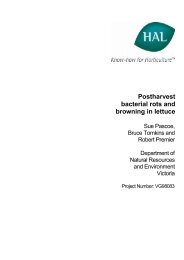 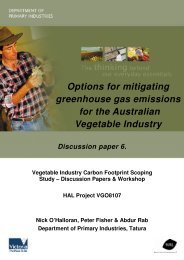 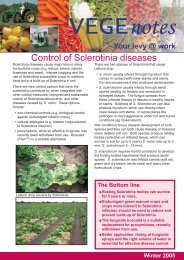 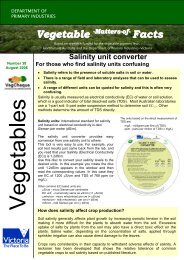 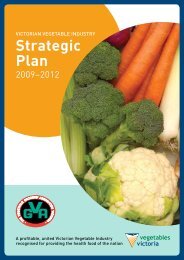 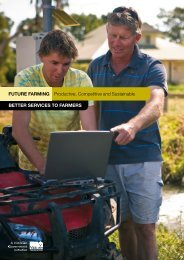 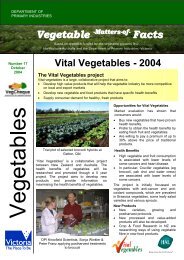 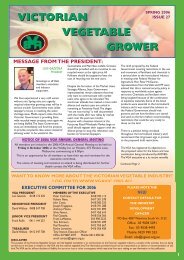 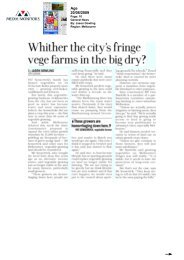 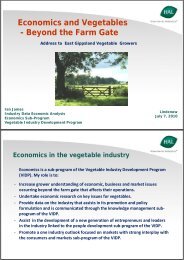 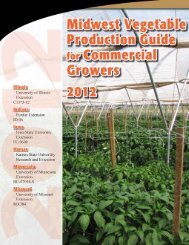 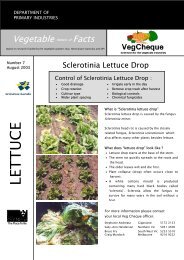 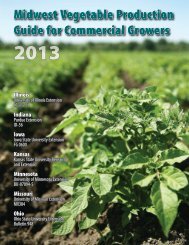 Magazine: The extent and cause of parsnip canker - Vegetable Growers ...