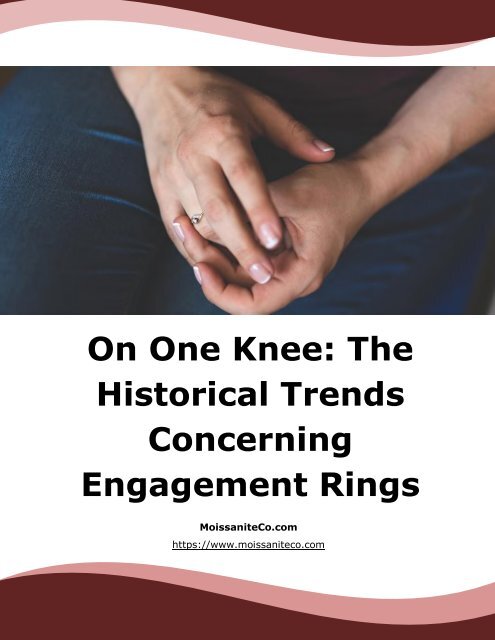 On One Knee The Historical Trends Concerning Engagement Rings

Engagement rings and wedding bands have existed for the longest time due to their enduring tradition. History provides several accounts on the trends of jewelry and matrimonial exchanges. The tradition began in the Roman Era. Macrobius promulgated the belief that a vein released blood from the heart and directly to the fourth finger of the left hand, where the Romans began wearing the rings.

On One Knee: The

to their enduring tradition. History provides several accounts on the trends of

jewelry and matrimonial exchanges. The tradition began in the Roman Era.

and directly to the fourth finger of the left hand, where the Romans began

Modern science has proven this belief to be wrong, but during the time, the

Romans believed the anatomical information and associated this with the

of iron and another of gold. The latter served for women to wear outside and

impress people. Both rings, though, would sport simplistic fabrication

techniques, devoid of any intricate crafting.

In the Third Century CE, the Romans began to introduce elaborate designs in

the fabrication of engagement rings. The band grew wider through the use of

marriage. And going into 860 CE, during the Middle Ages, engagement rings

had grown to be a cultural norm in society. Its significance, then, relied on its

material, such as the issuance of an edict by Pope Nicholas, that gold

During the medieval period in Europe, engagement rings began to sport

gemstones, like rubies, sapphires, and emeralds — turning jewelry into

treasure-like relics. Moving forward, the use of gemstones spread. The

Renaissance exemplified the beginnings of extravagance. The Italians, during

this time, had to provide three rings to the bride at an engagement ceremony

wherein the groom had to swear his intent under a sword. This was also the

From extravagance in crafting, engagement rings began to take on more

symbolisms in design. During the Victorian Era, rings began to bear hearts,

hands, and other symbols of fidelity while still fashioning colorful gemstones.

and angular shapes took over. It wasn’t until during the 1950s that

Magazine: On One Knee The Historical Trends Concerning Engagement Rings