Does a limited budget limit creativity and sustainability? The recently

Braamfontein, Johannesburg, shows how working within constraints can

in the Johannesburg CBD. The building

was handed over to the WWF at the end

be applying for a 6-Star Green Star SA rating with

under the Green Star Office v1 rating tool for both

Design and As Built.

If achieved, this building will be the fifth in South

Africa to achieve a top rating in this category – and it

will show a green building does not have to include

It takes time to fine tune and adjust sustainable

systems in a building, explains environmental

from Bornman and Associates. But despite some

initial challenges, he says the systems are performing

The original intention was to demolish the entire

two-storey building because it held no heritage value,

Architecture. However, reusing the existing brick

facade presented an opportunity to demonstrate

the concept of reusing “waste”, while honouring

the past. “Although it fits comfortably in its urban

It took about 1.5 months to deconstruct the rest

of the building, says Duckitt. The salvaged bricks,

timber floorboards, joists and beams, plus some

corrugated sheeting was stockpiled in the building

next door and cleaned. More than 80% of the

original material was suitable for reuse in the new

building and the rest was recycled in other ways.

Broken bricks were crushed to create aggregate, and

other materials were donated to the community.

Some of the timber is being used to create

furniture and fittings inside the new building.

“Waste management was a very important part of

the project,” says Duckitt, “and we achieved very

A big on-site challenge was digging a 4.5m deep

only one metre away from the existing two-storey

facade. The wall was anchored to scaffolding and the

basement was built in parts. As the new floors were

constructed, these were keyed in to the existing wall

until the facade was adequately braced.

The size of the building versus the site was also a

challenge, says Cretney, as there was little storage for

rubble and it was difficult to keep the site clean.

It was also not possible to provide on-site parking

and zoning laws allowed parking to be omitted.

Despite the fact that the building sits in close

proximity to some good inner city transport, all staff

currently use their personal vehicles and parking is

Storage for bicycles, lockers, and a shower has

been provided but the cycle lanes in Braamfontein

have not been well established yet.

The team wanted to take as many elements

as possible off-grid, however the building is

solar panels impractical. It was possible to use a

standard domestic solar geyser for hot water in the

three kitchens and the shower, because solar geysers

There is plenty of natural light and all artificial

with minimum lux levels for the office environment.

These are combined with movement sensors. The

windows are double-glazed and have automated

blinds, which are linked to the building management

system (BMS). They move up and down during the

day to regulate the infiltration of direct sunlight and

glare. Although it is not completely off-grid, it is a

The building is connected to the city gas supply,

and conventional portable gas heaters can be

“plugged” into a riser that connects to each floor.

This makes winter heating both very efficient and

economical. The Rinnai gas heaters use a very small

amount of electricity to power a fan that blows over

the gas flame, so temperature regulation is easy,

Unfortunately the building is not invulnerable

to blackouts. “There is unfortunately no on-site

using trigeneration, which is a turbine that runs off

gas, but the cost was about R1 million, which, in a

The building has high levels of natural light and the

automated blind system can be overridden in the

case of a power outage.

air-conditioning system but the R1.4 million

price tag was untenable. The result is a mixed mode

Unconditioned fresh air is pushed through a series

of chimney stacks on each floor in order to provide

the required number of air changes per hour, explains

Cretney. Added to this, staff can open windows, which

causes natural air movement as the air is pulled up

through other chimney vents. “It’s difficult to find a

balance between acoustics [the noise of the city] and

thermal comfort as the air temperature cannot be

The system will be monitored over the next few

months, and having just come through the hottest

period, there have been relatively few complaints, he

Another significant intervention is the black water

treatment system in the building’s basement - the first

in South Africa installed in an urban environment,

which means that none of the building’s waste water

goes back into the municipal sewerage system. The

water goes through a series of three chambers, and

then moves on to an anaerobic digester. It flows

through a further two filtration tanks before being

stored and reused for flushing toilets. The system’s

input capacity is 6000l of waste water per day but due

to the building currently being under occupied only

capacity so it takes time for the system to push out

water is currently the colour of pale ale craft beer

but we are getting there,” he adds. It takes some

adjustment for the building’s users to accept the

colour of the water in their toilet bowls, however,

“every litre flushed is a litre recovered”, says Duckitt.

An unexpected problem whereby a smell is being

emitted into the building is being resolved by

installing additional extraction in the basement. “The

reason we spend a full year monitoring the systems

More that 80% of the original building’s material was suitable for re-use, including using the timber to

create furniture and fittings for the new building.

• Over 80% of materials reused in new building

• Broken bricks sent for crushing to make aggregate and

other materials donated to the community

• Timber used to build furniture and fittings for new building

• Non-pollutant and non-toxic materials and finishes

Although in theory the end product could be

drinkable, municipal standards are stringent when

it comes to regulations and the costs and risks far

consumption is 171l per day, which, if compared

to the consumption of a five-person household at

an average of 650l per day, is a considerable saving,

The only consumptive use of non-potable water is

for the roof garden, which is fed by a drip irrigation

system. An attenuation tank under the timber

decking collects and channels rainwater from the

roof and trafficable areas to storage in the basement.

The black water system can also be topped up using

The planted roof garden for recreation and breaks is fed by a drip irrigation system. An attenuation tank

under the timber decking collects and channels rainwater from the roof to storage in the basement.

rainwater or municipal water (in an extreme case),

ensure it continues to function properly.

“To operate a green building requires the users

to change behaviour and initially there is always

time.” The team will be monitoring the building for

another year, through a full seasonal cycle, in order

to “tweak the system and the users so that they work

In comparison to the previous building, there

are a lot more facilities, including boardrooms and

recreational facilities on the roof. The indoor air

quality is fresh and all materials are non-pollutant

source areas programme manager, based in the

also has a special culture that the staff enjoy:

“Owning a green building gives the employees a

values as an organisation, particularly with some of

the unique features contained within our building.”

This has definitely increased productivity among the

staff and the open plan office environment, which

is filled with an abundance of natural light, has

brought the WWF team closer together, he adds.

The WWF building demonstrates dedication towards

within a strict budget, without being constrained

by it. The design team had to adapt and change the

design to suit, in some instances opting less for

and in so doing the project stayed largely within its

which was funded from the organisation’s reserves

and supplemented with applicable sustainable

The result is a building that disproves the idea that

building green should be expensive. Furthermore,

costs and a reduction of the intrinsic environmental

impact of the building, which in turn confirms the 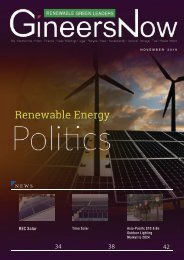