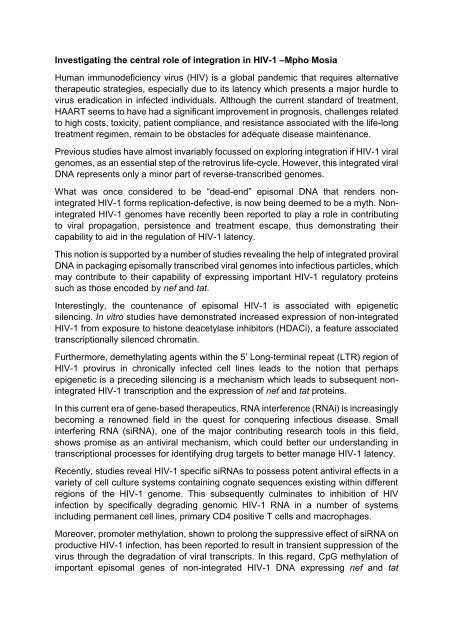 The aim here is to investigate non-integrated HIV-1 genomes by siRNA-induced promoter methylation, specifically in the 5’ Long-terminal repeat region

Investigating the central role of integration in HIV-1 –Mpho Mosia

therapeutic strategies, especially due to its latency which presents a major hurdle to

virus eradication in infected individuals. Although the current standard of treatment,

HAART seems to have had a significant improvement in prognosis, challenges related

to high costs, toxicity, patient compliance, and resistance associated with the life-long

treatment regimen, remain to be obstacles for adequate disease maintenance.

genomes, as an essential step of the retrovirus life-cycle. However, this integrated viral

DNA represents only a minor part of reverse-transcribed genomes.

HIV-1 forms replication-defective, is now being deemed to be a myth. Nonintegrated

to viral propagation, persistence and treatment escape, thus demonstrating their

capability to aid in the regulation of HIV-1 latency.

such as those encoded by nef and tat.

Interestingly, the countenance of episomal HIV-1 is associated with epigenetic

silencing. In vitro studies have demonstrated increased expression of non-integrated

Furthermore, demethylating agents within the 5’ Long-terminal repeat (LTR) region of

HIV-1 transcription and the expression of nef and tat proteins.

In this current era of gene-based therapeutics, RNA interference (RNAi) is increasingly

becoming a renowned field in the quest for conquering infectious disease. Small

interfering RNA (siRNA), one of the major contributing research tools in this field,

shows promise as an antiviral mechanism, which could better our understanding in

regions of the HIV-1 genome. This subsequently culminates to inhibition of HIV

Moreover, promoter methylation, shown to prolong the suppressive effect of siRNA on

productive HIV-1 infection, has been reported to result in transient suppression of the

virus through the degradation of viral transcripts. In this regard, CpG methylation of

In this respect, I aim to investigate non-integrated HIV-1 genomes by siRNA-induced

promoter methylation, specifically in the 5’ LTR of this burdensome retroviral disease. 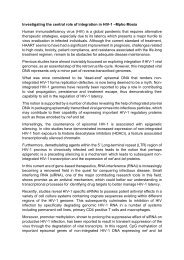 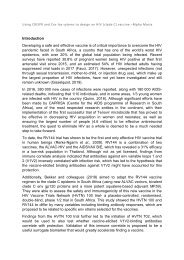