Remedy is a fun, off-beat, and educational editorial on the latest and greatest of alternative medicine. Remedy gives an educational, open-minded approach to informing readers about healing in a more natural way that is less harmful to our bodies. Remedy is passionate about exploring the most unconventional ways of medicine and providing some perspective in the world of alternative medicine.
This month’s edition of Remedy features a more popular form of alternative medicine: medical cannabis in the United States. This provides the reader with a better understanding of cannabis and how its chemical compounds work. People all over the United States have chosen the route of medical cannabis as their journey to health.

A Different Way of Healing

An overview on the

cannabis industry and how

it continues to grow.

A Visual Guide to Terpenes

A closer look on the many

An overview on the many different ways to

use and consume cannabis.

The basics on the medicinal

Descriptions and reviews on the

What you think is true

about marijuana, and what

A Different Way of Healing

names that taught Americans that cannabis is bad. For decades,

cannabis has had a bad connotation in society, especially in law

enforcement and the medical field. Cannabis is not new; it has been around

for ages. It’s been used in ancient tribes for rituals and medicine. Victorian

women used to infuse it with wine.

A medical cannabis patient is not just a typical hippy. Many people that

choose cannabis as their medicine are just your average, hard-working

citizens that have families and responsibilities. Looking at someone, you

may not think that they use cannabis daily. Nowadays, it’s not uncommon for

someone who is chronically ill to turn to cannabis as medicine. Eventually,

bodies. Many who are tired of taking multiple pills a day are in search of a

more natural way to heal. You may find that we all experience chronic illness

at some point in our lives.

Many who do not know much about medical cannabis might become

overwhelmed when reading about it. When it comes to the science behind

the medicine, there’s a lot to learn! In our feature story, we go over the basic

compounds, CBD and THC. We will educate you on how they work together

in harmony. We also break down the difference between indica and sativa,

the two subspecies of the cannabis genus.

We also provide a visual guide on terpenes. Terpenes are cannabinoids in

cannabis just like CBD and THC. They are flavorful cannabinoids that secrete

distinct smells, as well as provide certain relieving effects for the patient.

Knowledge on terpenes is important for choosing what strains help certain

ailments. Our visual guide should help break down this complicated subject.

In addition, we will explore the different methods of consumption, and the

proper tools that are used in the process. With this we will also provide inside

stories and testimonials from the patients themselves. We will also give

insight on the cannabis industry as a whole.

Please note: this editorial is not for diagnostic treatment. If you or a loved

one is considering starting a journey with medical cannabis, please consult

cannabis in your state.

There’s so much to learn from the medical cannabis issue of Remedy: A

Different Way of Healing. I hope you find this editorial fun and educational!

The Lowdown on Medical Cannabis

Herbalists say that for every poisonous plant, there’s

another with an antidote not far away. That kind

of balance between opposites is everywhere in

nature—and that may help to explain the interplay

between THC and CBD, the two most plentiful

compounds in the marijuana plant. Although these

in combination each affects the action of the other

to keep the marijuana high from spinning out of

THC (officially known as delta-9-tetrahydrocannabinol) is

the most prevalent of more than one hundred compounds

found in the marijuana plant. It’s followed closely by

cannabidiol, or CBD. Separately and together, these two

compounds are the cannabis ingredients to be most closely

studied for their applications in treating a wide range of

healing properties. The endocannabinoid system is a

throughout the body. These receptors can be filled by

cannabinoids manufactured by the body itself, or by

The body’s CB1 and CB2 receptors are abundant in the

brain, organs and tissues, and THC binds with them in

ways that are nearly identical to natural endocannabinoids

such as anandamide and 2-AG. That means THC can be

beneficial in treating a wide range of health conditions

affecting both body and mind—especially when it’s

CBD Works In Many Ways

CBD is the second most common compound found in

cannabis, and although it lacks the psychoactive properties

of THC, many studies have found that it has numerous

such as oil concentrates, edibles and even skin creams and

symptoms of autoimmune disorders and migraines, and

While THC binds directly with the body’s own

system and other organs and tissues, CBD works in more

as CBDA or the extracted version CBD, this compound

doesn’t directly bind with either of the body’s cannabinoid

receptors. Rather, it either enhances or inhibits the activity

of a long list of other receptors and channels that affect

processes ranging from the proliferation of cells (particularly

cancer cells) to the uptake of the calming neurotransmitter

How CBD Works In The Body

With more than 1,000 strains of cannabis having been

bred during the past several decades, it is critical that

patients are aware of the different types of efficacy

Some varieties of cannabis are most appropriate

for particular diseases and ailments, but not others.

Choosing the right strain is critical to ensuring that

Cannabis is a species of flowering herb that is split

medicine; what they do provide lacks potency and is

generally not appealing to patients. Because of this,

and cultivators; the focus of the medical cannabis

community is on indica and sativa strains. Indica and

sativa plants differ not only in their physiological

effects, but also in their appearance. Indica plants are

short and stocky, featuring leaves that are broad and

“chunky.” Sativa plants tend to be taller and skinnier

and may even be lanky in appearance, with leaves that

are thin and pointed.

The most important difference between these two

subspecies of cannabis, however, is in their medical

effects and how they influence energy levels and

are better for consumption in the evening or at night,

after the conclusion of the day’s work and activities.

Potent indica strains may give some patients what is

called “couchlock,” a condition in which they become

so relaxed that they can barely get up from the sofa.

Sativas, on the other hand, are uplifting and cerebral,

what has been called a “body high,” while sativas

(flowers) than indica varieties. This is why indica strains

have traditionally dominated those available on the

black market, where there is no concern for patient

need and the sole focus is profit. The fact that patients

are given no choice of subspecies or strain when

purchasing from the black market is a major reason

it should be avoided. Patients should never trust or

strain and that it was properly grown, dried, cured,

and laboratory tested for purity and contamination.

breed and grow a wide spectrum of strains within

both the indica and sativa categories for the purpose

of making available the right medicine for a particular

and lifestyle. Often, patients must maintain jobs or

level and can’t tolerate the sedative properties of

many indicas. Other times, patients must seek the

most potent non-opiate painkiller possible. Given

the choice of chronic pain or the mellowing effects

of a strong indica of a particular strain known for its

medical benefits, most patients will choose the latter.

In terms of particular ailments, sativa strains tend to

PTSD, and anxiety. Indicas are often the best for pain

and inflammation and, thus, are beneficial for patients

with arthritis, fibromyalgia, and cancer. However,

because so many diseases are accompanied by side

consider treating both their core disease and also

its daily symptoms. In the end, each patient will favor

multiple strains that will likely fall within the categories

of sativa, hybrid, and indica.

When it comes to aroma, indica strains tend to emit

sweet, fruity, or spicy. This difference in aroma is the

result of terpenes. Continue on page 56

I used to be a hairdresser from New Castle, DE, but

I was diagnosed with Amyotrophic Lateral Sclerosis

was told by my doctor not to smoke anything,

Catherine developed breast cancer in 2002. She

dealt with the disease. It was a difficult time for

her and her loved ones. She underwent surgery

and considerable chemotherapy and radiation

treatments. “Physically, it took quite a toll on me…

I was very sick.”

She had heard that cannabis could help

with those battling cancer. A member of her

extended family had dealt with brain cancer. He

to his use of cannabis.

With the chemo, Catherine didn’t want to eat.

She just didn’t have an appetite. She was a

nervous wreck. “I would smoke and I could

eat. I would smoke and I could sleep. With the

radiation, it was the same thing.”

“There’s just so much stress with having cancer.

I mean, your hair falls out. You don’t feel good. I

had grand babies during that time and I couldn’t

hold them. I was an emotional wreck. It helped.

So many pills…you don’t want to take another

pill. It was so much better just to smoke, to eat,

to smoke, and to sleep.”

She lived in Sheldon and would have to travel to

treatment in Kansas City or Joplin. When she was

undergoing chemotherapy, she would spend

the night there. It was stressful having to carry

cannabis with her. But it was necessary, because

it helped her through the treatments.

She would tell others who were also battling

typical deterioration of my body over the next two

years and prepared for my death – ALS is a terminal

illness and I probably had only another year or two.

I was passed a “joint” and said “Why not?” After

just a few puffs, I had a wonderful feeling – that my

disease had stopped! I’ve been smoking ever since

– for twenty-one years now, and I think I’m aging

quite well, thank you.

Cannabis works for me by drying up my saliva (ALS

patients often drown in their own fluids), helping

me cough and stimulating my lungs through its

Science now shows that Cannabis is actually a

the over-production of glutamate. Also, Cannabis

has long been known to have an anti-inflammatory

effect and inflammation is now believed to play an

cancer about cannabis. “It helps with your

stomach. Your stomach is just in knots all the

time. It does help. It helped me a lot.”

These days, she’s doing well. But she still talks to

people about cannabis; those diagnosed with

cancer. If they can’t eat or can’t sleep,

“I know it will help them.”

For educational purposes only. Not for publication. 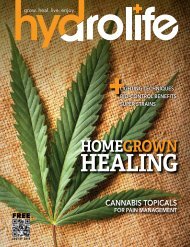 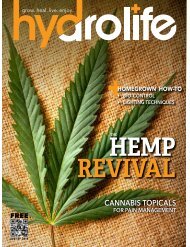 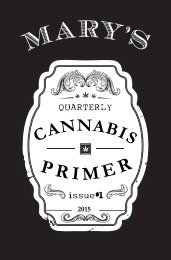 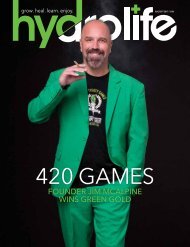 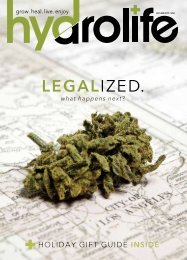 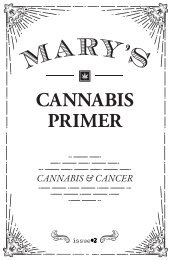 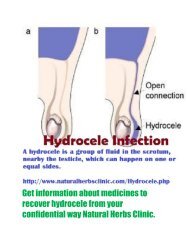 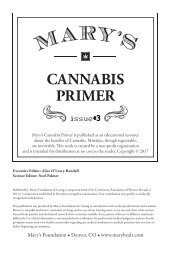 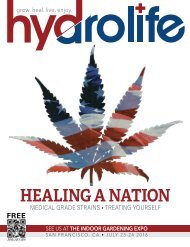 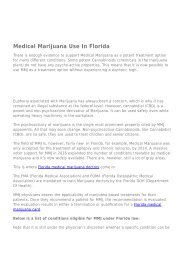