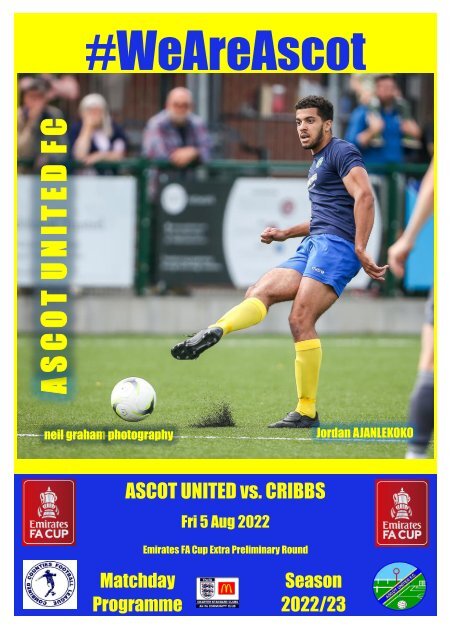 Next Match: Windsor A Sat 13 Aug

Here's a preview of what's inside this week's edition:

* Ladies, Ladies Reserves and Allied U18 reflection on last season

A warm welcome to Cribbs for

special welcome to all from Cribbs FC.

recent preseason friendlies. It doesn’t seem that long ago that we were signing off last season in

style with the cup final but I know Jamie and all of the team are now focused on the season ahead.

to strengthen and grow the club as a whole. We will be fielding more teams than ever going into the

new season, especially in our fast-growing girls section. The impact of the Lionesses in the past few

and facilities for any girls wanting to start their footballing journey.

with a realistic aim for players to get selected for Special Olympics GB in the future.

already proving a huge asset to the club. She is keen to get to know as many of our fans and members

complete the endless admin required at grassroots football. We are really fortunate to have one of

I hope you all have a fantastic evening.

Welcome to the players, officials

and supporters of Cribbs. Enjoy

Good evening everyone, it is good to be back in front of our home supporters tonight and we

It has been a very enjoyable (and busy!) off-season, I managed to squeeze in a wedding day,

marrying my beautiful, now wife, Emma and a honeymoon trip to Indonesia, but there was

As with every off-season, it has allowed us to review and evaluate the previous year but

look ahead to what we need to move forwards. As always, the club progresses off the pitch

every year and we want to ensure we are matching this on the pitch.

against Cribbs FC. It will be tough encounter and a huge challenge for us to overcome if we

are to progress into the next round. I have belief that the players will perform in the right

way tonight and, with your fantastic support, we will be doing everything we can to secure

the club and in addition, welcoming Abi Ticehurst to our off-field team, joining as Marketing

reputation in our local community.

Welcome to the players, officials and

supporters of Cribbs for this Emirates FA Cup

FA Cup fixture on a Friday evening under the lights. Some of our sister leagues begin their

this weekend’s cup ties. Other leagues began during midweek (including the Combined

the first outing. Both Ascot and Cribbs have had similar recent trajectories up the pyramid –

seasons later. Looking at our league, we’ve got some new faces this season including a few

where you’re probably wondering where they hang out - Broadfields United (Harrow, sharing

(Barnet) and Oxhey Jets (Watford). More dates with the M25!

success, not only due to

England's victory but for the

impact it will have on

women's football in the UK.

You’ll also see some new names on the team sheet. Its great to See Harry Laflin and Usman

Lalustani back with us, and some of you may also remember Jordan Ajanlekoku who played

experience with Beaconsfield and has since played against us in the County Cup. Looking

weekend at Windsor for our league opener. 50 year-old Barry Hayles is back part of their

backroom set up and what price for seeing him on the pitch again this season!? Finally, I

can’t end without referencing the Lionesses. What they achieved was simply outstanding

for the county, ladies and girls football and long may it continue. I’m an avid fan of the

crop are inspired to become the next Toone, Russo or Williamson. Enjoy the game! Neal

Click the logo above or visit oryzabeauty.com to receive a 30%

discount off anything in the online store using promo code

Below are the updated Ascot United appearance and scorers' records for

Need a room for your

is a perfect choice for

to explore availability and

striker Sarah Leonard. The Group have practices in

Ian is a Biomechanics coach, supporting players returning from injury and

Saturday. In front of a crowd of 1,122 at Slough Town’s Arbour Park, the professional outfit

stormed into a 3-0 half time lead before adding a late fourth to lift the silverware.

cannoned in off the angle of post and bar to make it 3-0.

headers from corners, although their already bleak prospects were all-but-extinguished

That said, the ten remaining Yellamen continued to push and nearly got the goal their efforts

deserved when Rory Merrick’s overhead kick struck the top of the crossbar.

Pushing forwards, Ascot were exposed, but they nearly shut Reading out for entire half only

for Melvin-Lambert to poke home for Reading during a seven-minute period of added time.

memorable cup run as much as their heroes’ performance on the day.

will compete in the

lateral move from the

battle with close rivals Westfield. The pivotal moment of the season came

with a handful of games remaining when they faced Westfield at home.

the title in the visitors’ hands, they bagged a late, late dramatic equaliser

to swing the pendulum back in their favour. They still needed to win their

afterwards, below) in March – but that they did – and more silverware

came back to The Racecourse.

They moved into the Thames Valley Counties

downs they eventually achieved promotion to

Division 1 of the SRWFL and later to the Premier

They reached the first round proper of the

women’s FA Cup for the first time in their

from Step 3 of the pyramid, and put up a fine

13th March signalled the end of their season

but their final league placing of 4th wasn't

confirmed until later when teams around them

Evans has added a few new faces during preseason

in the hope they can go even further

this campaign, which starts in September.

The existence of a reserve team and talented

junior section means there is competition for

places. Our Girls Under 16’s reached the Surrey

County Cup Final where they lost 3-1 against

mighty Crystal Palace, whilst one of our 16 year

olds – Tia Johnson – made the seamless

and even scooped a player of the month award

after scoring 4 goals in 4 games!

Below: Izzy Woods - pre-season against Brentford

Ascot United Ladies Reserves had an

incredible season in Division 3 (East) of

the Thames Valley Counties League as

they won all 18 league games on their

way to the league title and promotion!

They almost extended an alreadyincredible

Lea in the league cup final on 3rd April.

This was John Swallow's side's last

outing of the season, and in the end-ofseason

shake-up there was talk of them

being promoted 2 levels to the Division 1,

a sensible move given their total

dominance of Division 3 (East) and also

having beaten a Division 1 side earlier in

Ladies can reach out to either first team

Ascot United as we know it, was founded in 1965 by a men’s team who played their games at Sunninghill with “after

match meetings” in The Wells in Cheapside village (now Mikado’s). Teams played as long ago as 1928 under the name

“Ascot United” but nothing to link them directly to the current club. In 1965, the club had gained permission from the

Ascot Racecourse Trustees to convert the land east of coach park 10 into a football pitch. A wooden clubhouse was built,

and this team went on to win many prestigious trophies in the years that followed.

Various youth teams represented Ascot United over the years up to 1988, and in 1992 the East Berks 7-a-side Association

was formed by our then Chairman Keith Wicks, introducing small-sided junior games and having disbanded in 1980 the

continued promotions to the Senior division and winning various Cups including the Fielden Charity Cup in 1996/7. In

2001, the First Team join the Reading Senior League, were awarded FA Charter Standard status in 2004, and won the

followed in 2007, before promotion to the Premier Division in 2009. The club today has grown to become one of the

largest Community football clubs in the UK with over 1,000 registered players and over 70 teams playing every weekend

embracing all ages and abilities from 5 year olds through to veterans. A new clubhouse opened in September 2010,

together with an improved main pitch, floodlights and a stand.

“The Yellamen” made their debut in the FA Cup in 2011 with a home tie against Wembley FC. The game attracted 1,149

people to The Racecourse on a Friday evening where the famous trophy itself was on display, and the match was

streamed live on Facebook. In 2012-13 and 2015-16 we reached the Quarter Final of the FA Vase twice, enjoyed two topthree

finishes in the Uhlsport Hellenic League Premier Division, and won both the Bluefin Sport Challenge Cup and

his side to the top of the table for long spells, winning two team-of-the-month awards, and finishing with league cup

glory once again by defeating Windsor 3-1.

We were transferred into the Combined Counties League for the 2019-20 season, playing on our new 3G pitch facility,

which transformed the club by facilitating more of our teams’ matches and training at The Racecourse. The stronger

platform facilitated further player development, and Jamie’s young side would lead the table for long periods before

Coronavirus. Retaining much of the same squad for 2020-21, Jamie saw his side in and around the challengers before

another pandemic-curtailed season, although they battled through to the league cup final where they were ultimately

beaten on penalties by Redhill.

In 2021-22 Ascot finished 6th in the league, but the highlight was an eye-catching run to the final of the Berks and Bucks

Senior Cup Final where they defeated three sides from higher divisions, including Wycombe Wanderers in the semifinal

front of a club-record crowd of 1,267. For the current season, Ascot have strengthened their squad and made further

ground developments; hopes are high that they will now push for the promotion they were cruelly denied in 2019-20.

regularly winners of leagues and county Cups. Our senior Ladies won promotion to the Premier Division of the Southern

the First Round Proper of the FA Cup. Meanwhile, our Ladies Reserves won every league match of their Thames Valley

neil.richards@ascotunited.co.uk. Other packages include individual player

sponsorship and recognition in this programme for just £30 per season! 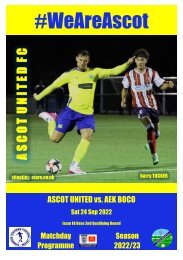 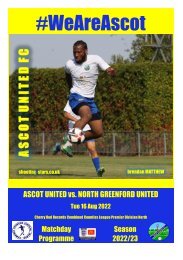 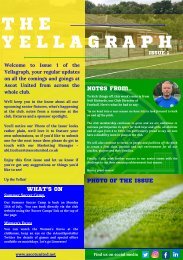 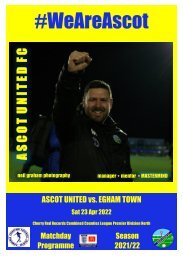 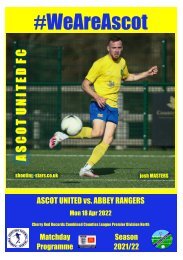 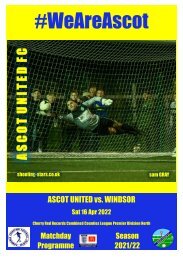 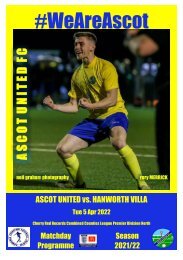 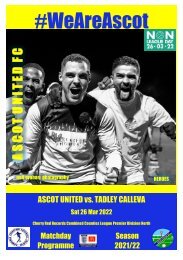 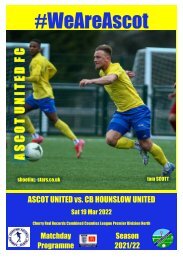 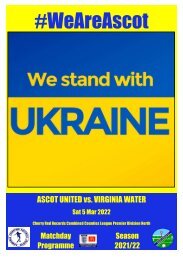 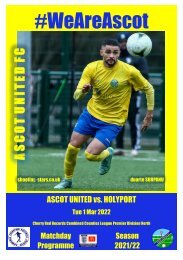 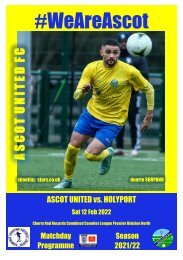 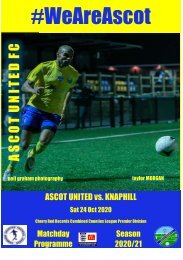 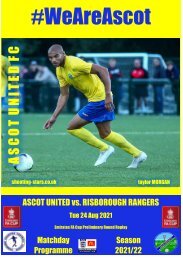 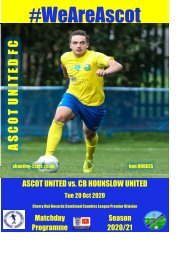 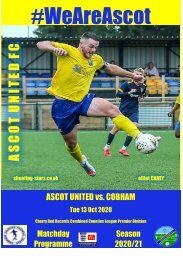 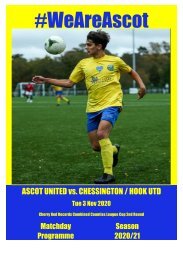 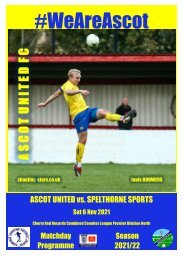