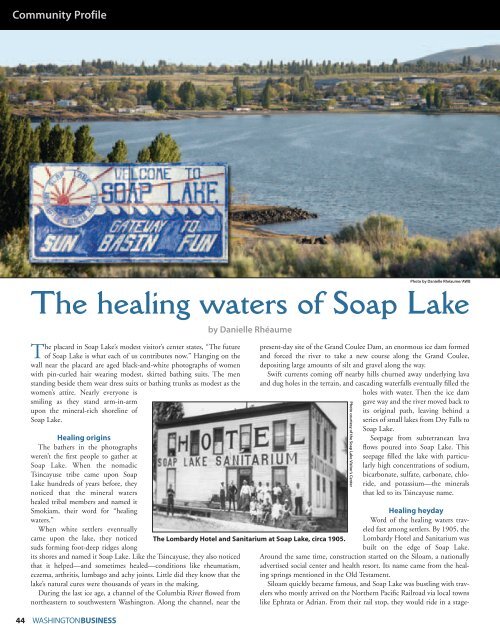 The healing waters of Soap Lake

of Soap Lake is what each of us contributes now.” Hanging on the

women’s attire. Nearly everyone is

smiling as they stand arm-in-arm

upon the mineral-rich shoreline of

The bathers in the photographs

weren’t the first people to gather at

Soap Lake. When the nomadic

Lake hundreds of years before, they

noticed that the mineral waters

healed tribal members and named it

Smokiam, their word for “healing

came upon the lake, they noticed

its shores and named it Soap Lake. Like the Tsincayuse, they also noticed

eczema, arthritis, lumbago and achy joints. Little did they know that the

lake’s natural cures were thousands of years in the making.

During the last ice age, a channel of the Columbia River flowed from

northeastern to southwestern Washington. Along the channel, near the

The Lombardy Hotel and Sanitarium at Soap Lake, circa 1905.

and forced the river to take a new course along the Grand Coulee,

depositing large amounts of silt and gravel along the way.

Swift currents coming off nearby hills churned away underlying lava

and dug holes in the terrain, and cascading waterfalls eventually filled the

holes with water. Then the ice dam

gave way and the river moved back to

its original path, leaving behind a

series of small lakes from Dry Falls to

flows poured into Soap Lake. This

seepage filled the lake with particularly

that led to its Tsincayuse name.

Word of the healing waters traveled

Lombardy Hotel and Sanitarium was

built on the edge of Soap Lake.

Around the same time, construction started on the Siloam, a nationally

advertised social center and health resort. Its name came from the healing

springs mentioned in the Old Testament.

who mostly arrived on the Northern Pacific Railroad via local towns

like Ephrata or Adrian. From their rail stop, they would ride in a stage-

coach up the dusty desert road to Soap Lake. This was long before State

Route 17 took modern drivers into the heart of the city.

With the steady arrival of travelers, Soap Lake quickly developed an

waters and mud were ready to socialize, dance and drink. Popular bands

beach. It was a time of good health and celebration as Soap Lake quickly

from Buerger’s disease, a crippling circulatory disease caused by tobacco

use and exposure to mustard gas. It causes excruciating pain as gangrenous

lesions expose the nerves in sufferer’s hands and feet. At the time,

quitting tobacco and amputation were the only available therapies.

often spared them from amputations.

The lake’s effectiveness in treating Buerger’s disease moved the

as advertising Soap Lake as “The World’s Greatest Medical Marvel.”

then, three of the city’s sanitariums, including the famed Siloam, had

burned to the ground and rainfall in the area had dropped by 40 percent.

The lake and local agriculture were devastated.

When the construction of Grand Coulee Dam brought workers back

into the area in the 1930s and 1940s, Soap Lake locals were optimistic

about the dam’s effect on the region. They hoped the influx of workers

would bring more people into their city.

An unforeseeable problem arose when the dam’s waters leaked through

the aquifer and drained into Soap Lake, diluting its mineral content. By

the late 1940s, Soap Lake’s sodium levels were half of what they’d been

Engineers solved the dilution problem in the early 1950s and returned

the lake to its mineral-rich state. By then, interest in natural cures and

spas had significantly declined as people turned to prescription antibiotics

and other cures for ailments. In no time, Soap Lake became a ghost town

disintegrating in the shadow of its former glory.

In 2001, through generous donations and community efforts, planning

donated land in downtown Soap Lake. Masquers Theater is one of the

diverse roster of musicals, dramas, and comedies throughout the year.

Residents campaigned the following year to acquire a giant Time’s

Square lava lamp and set it up near downtown. The 65-foot-tall fixture

was donated and shipped to the city by Target Corp. in December 2004.

reassemble the lamp on donated property. Residents hope that the attraction

will draw a great deal of attention and increase tourism for Soap Lake.

Earlier this summer, after 13 years of planning and fundraising, a new

the 6-ton, 15-foot-tall bronze sculpture by Keith Powell and David

According to the Columbia Basin Herald (Moses Lake, Wash.), it features

a Native American man with a woman sitting on a rock. The woman

holds a bowl with water draining through the bottom. Wings spread

across the man’s back and his hand is extended toward the sky. The artwork

where it will serve as a sundial facing the waters that inspired its creation.

and Wellness Center. City leaders envision the $3-million center as a

place for urbanites and health-seekers to take the waters, relax, and reinvigorate

in a refuge far from the modern, busy world.

Massage therapist Bridgett Oie works at the Healing Water Spa on Main Street, where visitors can get a massage or soak in Soap Lake mud.

Soap Lake restaurateur Marina Romary serves up some barbecue hot off the grill.

With the recent arrival of Yahoo and

Microsoft server facilities in nearby Quincy,

as well as a revived interest in natural medicine,

Soap Lake’s citizens feel that there is no

time like the present to make their vision a

“We looked to some of the finest spas in the

Chamber of Commerce and longtime resident.

Blueprints for the Soap Lake Spa and

Wellness Center include ambient, warm, and

and mud-soaking tubs, patios for sunbathing,

and hotel accommodations. From the pools

and patios, guests will have panoramic views

of Soap Lake and the bordering hills.

Revitalization Board awarded a $1-million

grant for construction of the 12,000-squarefoot

center. Soap Lake will get these funds as

long as the city secures private financing to pay

While Soap Lake hasn’t yet acquired all the

needed funds, the city is hopeful that

investors will step forward as the city vies to

be the premiere healing and wellness destination

“The lake is nice in the summer, but it doesn’t

attract anyone in the winter. If we have a

nice, European-style spa, then we can keep

mayor of Soap Lake and owner of the Notara’s

Lodge and Businessmen’s Club and Don’s

Restaurant, looks forward to the spa.

“Competition is good for business,” she said.

Whether their contribution takes the form of

to revitalize the healing arts, it’s true that what

their future. This is true for most cities. What

makes Soap Lake different is that, as its citizens

work towards a prosperous future for their

humble city, they are constantly reminded of a

mixed with collective enthusiasm to form an

economic and social cocktail almost as potent as

No wonder the bathers in the photographs