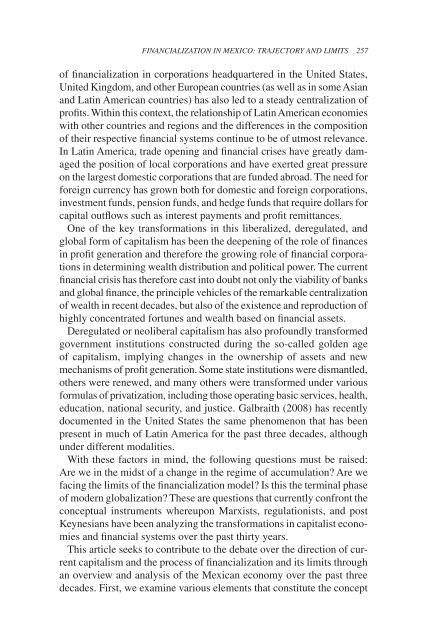 FINANCIALIzATION IN MEXICO: TRAJECTORY AND LIMITS 257

of financialization in corporations headquartered in the United States,

United Kingdom, and other European countries (as well as in some Asian

profits. Within this context, the relationship of Latin American economies

with other countries and regions and the differences in the composition

of their respective financial systems continue to be of utmost relevance.

the position of local corporations and have exerted great pressure

on the largest domestic corporations that are funded abroad. The need for

foreign currency has grown both for domestic and foreign corporations,

capital outflows such as interest payments and profit remittances.

One of the key transformations in this liberalized, deregulated, and

in profit generation and therefore the growing role of financial corporations

in determining wealth distribution and political power. The current

and global finance, the principle vehicles of the remarkable centralization

of wealth in recent decades, but also of the existence and reproduction of

highly concentrated fortunes and wealth based on financial assets.

of capitalism, implying changes in the ownership of assets and new

mechanisms of profit generation. Some state institutions were dismantled,

formulas of privatization, including those operating basic services, health,

documented in the United States the same phenomenon that has been

present in much of Latin America for the past three decades, although

With these factors in mind, the following questions must be raised:

Are we in the midst of a change in the regime of accumulation? Are we

facing the limits of the financialization model? Is this the terminal phase

of modern globalization? These are questions that currently confront the

Keynesians have been analyzing the transformations in capitalist economies

and financial systems over the past thirty years.

capitalism and the process of financialization and its limits through

decades. First, we examine various elements that constitute the concept