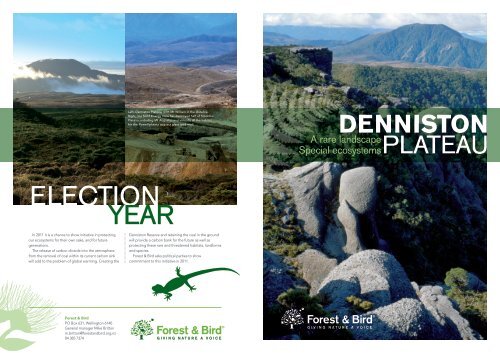 5900-hectare reserve on the plateau - Forest and Bird

5900-hectare reserve on the plateau - Forest and Bird

In 2011 it is a chance to show initiative in protecting

our ecosystems for their own sake, and for future

The release of carbon dioxide into the atmosphere

from the removal of coal within its current carbon sink

will add to the problem of global warming. Creating the

Left, Denniston Plateau, with Mt William in the distance.

Right, the Solid Energy mine has destroyed half of Stockton

Plateau, including Mt Augustus and virtually all the habitat

Denniston Reserve and retaining the coal in the ground

will provide a carbon bank for the future as well as

commitment to this initiative in 2011.

Formed about 40 million years ago, this outstanding

natural landscape is a treasure trove of 18 identified

this vast landscape, including red mistletoe, and the

The plateaus include historically rare ecosystems.

Boulder fields of acidic rocks are found in only two

catchment and on the upper slopes of

found in only one other place in

known as the Buller coal fields. More than half of the

Stockton Plateau has already been mined by Solid

Energy, with plans for an expansion of these mines

into other areas of the plateau, such as the consented

Cypress mine in Happy Valley.

The Denniston Plateau has a history of small

underground mining, but has been spared the

destruction of habitat through open-cast mining.

However, Australian-owned Bathurst Resources have

Plateau with plans to exploit all of the coal available.

The company is currently seeking resource consent for

an initial open-cast mine on the Denniston Plateau of

6.1 million tonnes, but has indicated it wishes to mine

up to an additional 80 million tonnes from the wider

The Westport consent hearing for the 6.1 million-tonne

Escarpment Mine Project has just concluded. The

applicant is seeking a 12-year mining consent, but 35-year

consent for a large coal processing plant and infrastructure

on the Denniston Plateau. The company has advised that

it is uneconomic for it to build this infrastructure unless it

can mine further coal in the vicinity.

Great spotted kiwi, or roroa, are found on the Denniston Plateau.

historically rare, and the plateaus have some good

(roroa), fernbirds, western weka and kaka. But it is the

diversity of smaller animal life that characterises the

plateaus. Rare giant land snails are found throughout the

area, including the nationally endangered Powelliphanta

patrickensis. Cryptic species such as the West

Species new to science are

The Department of Conservation was not present

at the hearing, and the absence caused considerable

of the Denniston Plateau. Furthermore, the applicant

company proposes a series of offsite mitigations that

involve public conservation land and there was no

capacity to scrutinise these proposals at the hearing.

The Department of Conservation will consider an

application for the coal processing plant. Both decisions

will need to be made by the Minister or Ministerial

delegation – with the first determination reports

Because this land has high conservation values

and is the only land protected within the public

conservation estate on the Brunner coal

measures, we urge the Minister to

on the Denniston Plateau and surrounds. The ong>

would protect the natural and historic features, and

coal mines, and private land. The key to its protection

would be including it within Schedule 4 of the Crown

A significant amount of information on the high

conservation values of the wider Denniston and

Stockton plateaus has been gathered over several

years, with information being held by the Department

organisations and through resource consent and

Our proposal for a ong> based on the public

conservation land on the Denniston Plateau is based

on the best information regarding important species

As conservation land, the Denniston Plateau is the

best intact example of the ecosystems remaining free of

open-cast mining. It includes a 1138ha pakihi wetland of

national significance – which is home to the threatened

fernbird. It has important habitat for Powelliphanta

includes the best example of stalactite bryophytes in

New Zealand and Australia, and Mt Rochfort is habitat

habitat for great spotted kiwi, and is an outstanding

forest and bluff outcrops. A new species, the Mt William

flatworm, has recently been discovered in this area.

The Waimangaroa River is the key river flowing to the

south of the Stockton Plateau. The gorge is spectacular,

with rocky outcrops and several streams draining from

the southern slopes of Stockton. These naturally clear

and slightly acidic streams are home to freshwater

crayfish (koura). It is stronghold habitat for Powelliphanta

The southern slopes of the Stockton Plateau reveal

some of the best remaining large landscapes of

of the Stockton Plateau, Deep Stream is also important

habitat for both great spotted kiwi and Powelliphanta

patrickensis. The combination of plateau and river gorge

The proposed Denniston Reserve is of sufficient size

to provide a continuity of complex landforms, rare

ecosystems and habitats that will allow for long-term

sustainability. Its shape will allow for effective predator 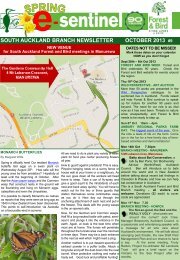 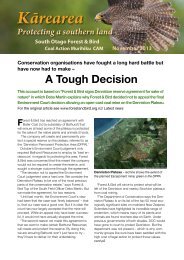 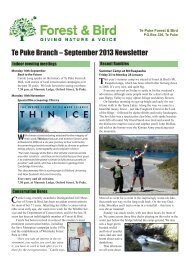 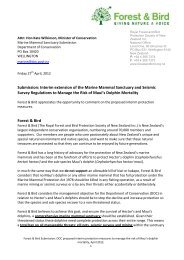 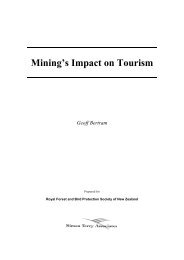 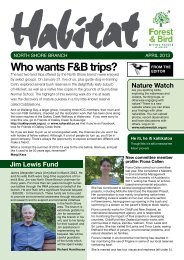 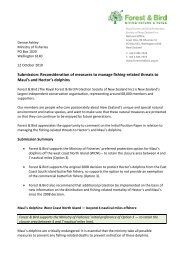 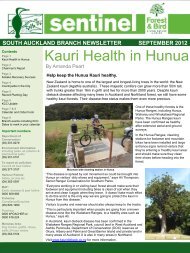 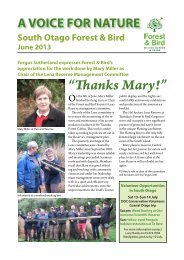 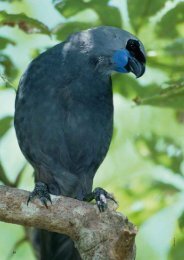 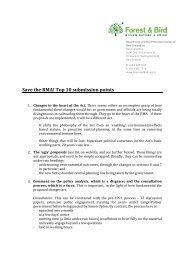 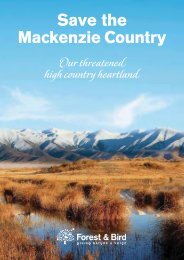 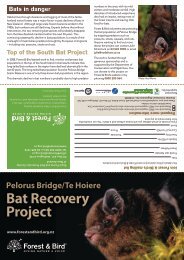 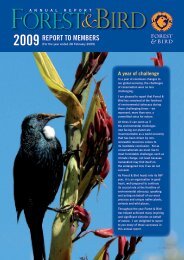 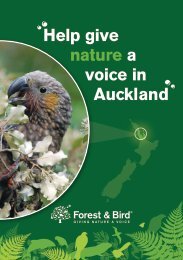 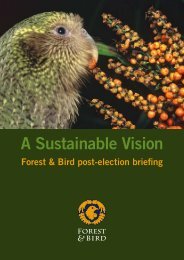 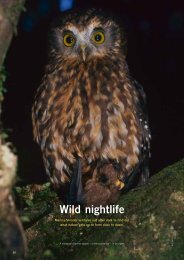 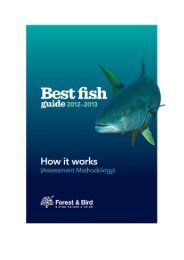 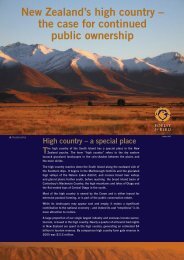 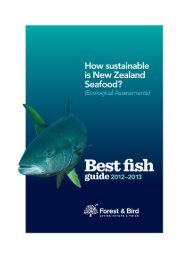 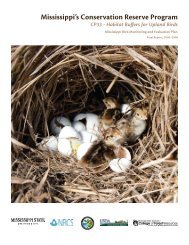 Magazine: 5900-hectare reserve on the plateau - Forest and Bird