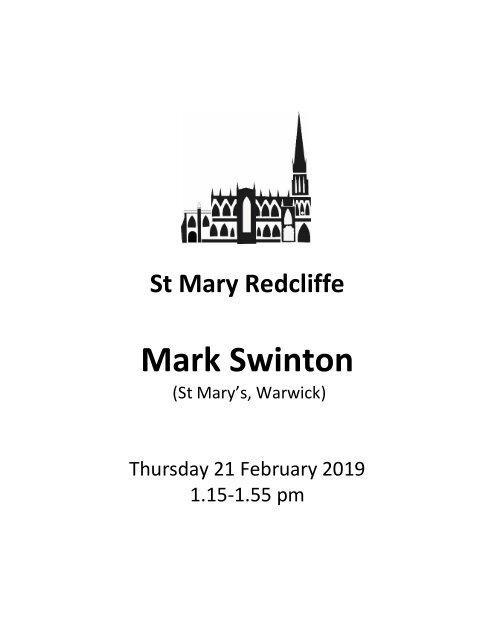 Music degrees at the University of York. A Fellow of the Royal College of

Organists since 2006, he has given numerous recitals at venues throughout

the UK. He has also performed in France, Germany, Holland and Spain both as

a soloist and an accompanist. He is married to Holly, a primary school teacher

and dyslexia specialist. They have two sons, Conrad and Angelo.

Mark has been Assistant Director of Music at the Collegiate Church of St Mary,

Warwick since October 2011, having previously held appointments at Kendal

week and in their busy regime of concerts, tours, recordings including the CDs

“Christmas from Warwick” and “Gaudeamus omnes” (Regent Records) and

services in the absence of the regular choirs. He has also served as Acting

Director of Music for the latter half of 2017.

Mark’s recital engagements have taken him all over the UK and abroad, to

Southwark (amongst others), the priories of Cartmel and Christchurch, the

as Hull City Hall and Reading Town Hall. His first solo CD “Colours of the Klais”

organ, was released in 2007. Further CDs have included “A Bach Family

COULD YOU DONATE USING GIFT AID?

If you are a UK Tax Payer, please would you consider gift-aiding your donation

Envelopes and pens available at the back of church.