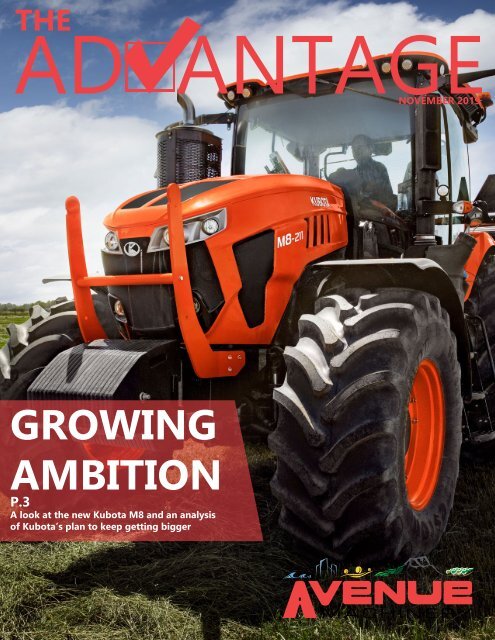 We cover the highly anticipated release of the Kubota M8 and look at Kubota's plans to keep getting bigger and why these plans are a benefit to the farmers of British Columbia.

A look at the new Kubota M8 and an analysis

of Kubota’s plan to keep getting bigger

give them the perfect gift

It was another marvelous season at Thunderbird Show Park. The team at TBird is renowned

around the globe for hosting world class equestrian events. This year the Thunderbird Show

Avenue Machinery was part of Family Days in the

Maze at the Historic O’Keefe Ranch in Vernon. As

part of the fun we hosted a pedal tractor race that

everyone wanted to be part of! Imagine our surprise

when Beacon the Beaver* ripped around the track in

The O’Keefe Ranch keeps the history of early BC

ranching alive and we are grateful to work with them

in any way to help preserve the past for generations

*Record set was in the “riders with massive feet and poor vision” division.

The last decade has seen Kubota grow both the size

of their product line and the sizes available in their

a very solid reputation for reliability it is clear Kubota

wants to be known for even larger achievements.

It is no secret that Kubota has their eyes on being

a global leader in agriculture. From the rice fields of

has an ambition to put its machines everywhere. With

a commitment to product development and their laser

focus on engineering, it’s not hard to imagine Kubota

continuing to grow, becoming more dominant in the

industry. How do these ambitions help the farmers

tractors and innovative tools that will serve British

In August, Kubota held a product release event in

Texas where they gave us an introduction to the

horsepower as it will be available in models, 190 and

210 horsepower. These larger machines build on the

stated goals of Kubota to be a major player in world

wide agriculture. The move was in no way a surprise,

it had been rumored for sometime that the M7 was

going to be joined by a big brother. Even casual

observers are aware that Kubota has spent the last

8 years positioning itself as a legitimate contender in

In 2012 Kubota purchased the Kverneland group.

With that acquisition Kubota brought serious

agricultural knowledge and technology into their

with farmers favorites - including plows, mowers

and balers, many which are much bigger than any

of Kubota’s tractors could reasonably use. Similarly

in 2016 Kubota increased their equipment profile by

includes large planters and giant tillage tools that until

now no Kubota could use.

in their plans to be recognized as a ‘Global Major

Kimata to describe the vision Kubota has for itself.

To reach this goal Kubota will continue investing in

growing their offering of products to cover the whole

market. By introducing the M8, the Kubota lineup now

easily meets the needs of most British Columbia dairy

and cattle operations. In the M8, Kubota built a heavy

tractor which is reliable, powerful and fuel efficient.

The tractor features a 6 cylinder Cummins B6.7

and fuel efficiency. Using a supplied engine is a little

different for Kubota, the B6.7 is a popular engine

with a well proven track record. Parts and service

agreements are in place to guarantee tractor uptime.

As part of these agreements Avenue Machinery is

trained and authorized to work on this engine.

Transmission options for the M8 include the Kubota

speeds, providing a seamless speed match to the

working range of any job.

There will be even more pressure to improve yield

as farmings footprints will be forced to shrink. Avenue

Machinery has been helping farmers transition to

techniques is imperative to the farmer looking to grow

and adapt in the years ahead. Kubota has engineered

the M8 to maximize the currently available farming

technologies, while being future proofed to accept

future advancements as well. M8 tractors give you all

to prescription mapping. The EZ command

of any ISOBUS ready implements from any brand.

Kubota has used an open architecture system that

will work with any GPS auto-steer system currently

The M8 can proudly be stamped “Made in Canada”.

Manufactured as part of a strategic partnership with

Versatile tractors in Winnipeg the M8 tractors will

roll off a Manitoba assembly line. Rumors of Kubota

courting Versatile go back almost a decade and this

agreement will no doubt fuel speculation of what the

future holds for the two. What we do know is that

the production of the M8 will result in job security for

in a 6 year co-design project making the M8 more

than a “re-badged” machine. It is built on Versatile’s

platform but is heavily modified with distinctly Kubota

innovations; those that Kubota worked directly with

EZ Command Center is designed to put all major

functions within an easy reach.

machines in an intro suited for a rock star

the right person for any job isn’t easy. Agriculture is

adopting to this reality and Kubota is helping lead

the way. Kubota is on the cutting edge of reducing

drone tractors are in late testing stages on farms

Kubota’s newest baler for its efficiency gains. After

- the worlds first and only non-stop fixed chamber

baler and the world’s only non-stop fixed chamber

Combination balers have grown in popularity

because of the speed advantages they provide,

reduces the chances of bales spoiling. It is best

when a bale spends almost no time unwrapped and

ideally a bale should spend no time unprotected on

the ground. Until now there has been a drawback

to round bale production. Though the combination

wrappers have greatly increased the speed of round

baling, there has remained the inconvenience of

changes this by enabling non-stop baling. The

continuous process is achieved by using a double

as if it is two balers in one.

The cycle looks like this; after pick up, a pre-chamber

starts the baling process, once the bale is about

two thirds done it is transfered to the main chamber

where it is finished. A very dense four by four bale is

then netted and kicked out the back to be wrapped

before being dropped to the ground. The process

forms a continuous cycle that never needs to stop,

Close mounting of the pick-up to the rotor eliminates

any dead areas when working in short crops while

Bales, wraps and drops with no stops

match all conditions, all backed up with the security

of a drop floor in case of blockage. FASTBALE was

designed to save time during reloading as well.

Kubota has outfitted the FASTBALE with an easy

saved for operators. Film changeover of both rolls is

achieved while standing in the same position. These

Though new to North America, it’s important to

note that FASTBALE has been released in Europe

under the Vicon brand for over three years. Only

now that it has proven itself has Kubota gone

ahead with releasing the innovation to the North

American market. FASTBALE has been slower to

arrive to North America than expected but ensuring

that the radical technology was ready for North

has done extensive testing across the continent.

Over the last couple of years FASTBALE units

have worked the many different climates and crops,

Kubota The FASTBALE is an impressive piece of

amount of horsepower, making the FASTBALE and

M8 tractor a perfect pair of products for Kubota to

release together. Prior to the reveal of the M8 Kubota

did not have a machine truly capable of operating the

giving farmers one of the first opportunities to see this

leaked from the event was the first of the Kubota

branded FASTBALE and created a slight furor, there

is a deep and tangible desire for FASTBALE to finally

be available. The wait is coming to an end.

With the 2020 release date creeping closer you can

begin talking to your Avenue salesperson about how

FASTBALE may help your operation. You won’t have

to wait much longer to see one. FASTBALE will be

on display during the Pacific Ag Show.

B.C. testing has been extensive

FASTBALE with the Kubota badge

THE NOVEMBER 2019 GROWING AMBITION P.3 A look at the new Kubota M8 and an analysis of Kubota’s plan to keep getting bigger 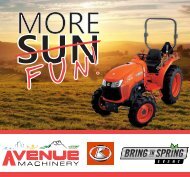 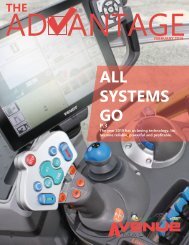