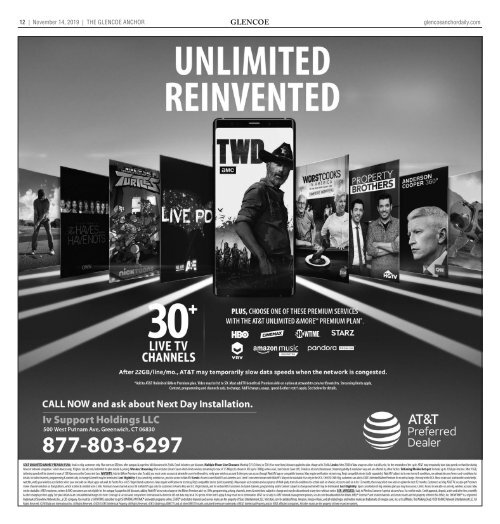 glencoeanchordaily.com school the glencoe anchor | November 14, 2019 | 13 New Trier scouts feed community at pancake breakfast fundraiser Alexa Burnell Freelance Reporter Pancakes, sausage and coffee may have been the focus of the 73rd Annual Boy Scout/Girl Scout Troop 5/Crew 5 Pancake Breakfast, held on Nov. 2, but the real icing on the cake was the valuable life skills troop members gained while feeding nearly 1,000 people. Held at First Presbyterian Church in Wilmette, the long-standing event is the troop’s largest fundraiser, meaning yearlong adventures remain possible. Proceeds from the breakfast fund highlyanticipated trips to popular scout camps, such as Philmont Scout Ranch in New Mexico and Sea Base Scout Camp near St. Thomas, just to name a few. Along with earning Annual Lake Forest Regatta draws sailors from Great Lakes region New Trier earns qualifying spot for championships Katie Copenhaver Freelance Reporter More than 220 young sailors from Illinois, Wisconsin and Minnesota competed in the annual Spectacular Halloween Regatta at Forest Park Beach from Oct. 26-27. The high school division races served as a qualifying event for the MISSA (Midwest Interscholastic Sailing Association) Great Lakes Championship Regatta, their chance to participate in such adventures, the act of hosting an event of this magnitude, from start to finish, is a learning lesson in and of itself. “Teamwork, leadership skills, organization, preparing and planning are all part of what the breakfast teaches the troop,” Scoutmaster Ray Macika said. “Each member must sell a certain amount of tickets, so the prep work begins months before the actual event.” As the event nears, scouts must prepare the space, advertise and ensure that they have all they need to feed the masses, according to Macika. “On the day of, they work on their social skills, greeting customers, serving food, answering questions,” Macika said. “There is so much that come from this one which was held Nov. 9 and 10 at Monroe Harbor, hosted by the Chicago Yacht Club. The elementary and middle school kids raced in the “opti” green, white, blue and red fleets in optimist sailboats. For most of them, this was their final competition of the year. New Trier High School earned the qualifying spot for the ISSA Atlantic Coast Championships, which were held Nov. 9-10 at Tom’s River YC in New Jersey. The Halloween Regatta is hosted by Lake Forest Sailing, a program of the city’s Parks and Recreation New Trier student Rita McCarthy, 16, fills up cups of orange juice during the 73rd Annual Boy Scout/Girl Scout Troop 5/Crew 5 Pancake Breakfast on Nov. 2 at First Presbyterian Church in Wilmette. Rhonda Holcomb/22nd Century Media Division. Will Howard has served as the head coach and program director for four years. A Lake Forest High School alum, Howard said he grew up in this sailing program, starting with the Green Fleet, the first competitive level, and advancing through the other levels to the high school division. This regatta has been running for about 20 years. “It’s lovely how everyone jumps in to help [each other],” said Beth Bower, mother of Teddy Bower, a 12-year-old in Lake Forest Sailing. “That’s the spirit of the program. It’s a really event.” Over the years, the troop has learned to take different factors into consideration. For example, they now offer glutenfree batter, ensuring that everyone has the chance cooperative team effort.” “I love the camaraderie and respect that the kids have for each other,” said Stacy Keane, mother of Avery Keane, a 10-yearold, and Mason Keane, a 9-year-old, both in Lake Forest Sailing. “Rule No. 1 of sailing is safety of yourself and your competitors,” added Keane. Both Lake Bluff resident Beth Bower and Lake Forest resident Stacy Keane grew up sailing and introduced the sport to their kids. They currently volunteer for the sailing club and were helping to enter race scores before the award 2 to enjoy some hot flapjacks on a cool, fall morning. In addition, the event has evolved into a zerowaste day. Scouts rely on environmentally-friendly products and teach guests how to properly recycle, compost and dispose of waste. One of the newest additions to the 2019 breakfast was the inclusion of female troop mates. In February 2019, the Boy Scout national organization opened their doors to female members and Troop 5 has proudly welcomed 15 girls to the team, adding a new dynamic to the troop and to the pancake breakfast. Sofia Ali and Katie Myerholtz, of Winnetka, are both freshman at New Trier. They joined Troop 5 the minute they were allowed to do so, happy to be so accepted by the already close-knit group. “I’ve met some of my Please see pancake, 15 A spectator watches through his binoculars as sailors participating in the Lake Forest Halloween Spectacular Regatta cast off on Lake Michigan Sunday, Oct. 27. Alex Newman/22nd Century Media 3 presentation on Sunday. “This facility is top notch,” said Bower, who has seen a lot of harbors from her childhood in upstate New York to her collegiate days at Connecticut College to the waterfronts where competition has taken her and her family.