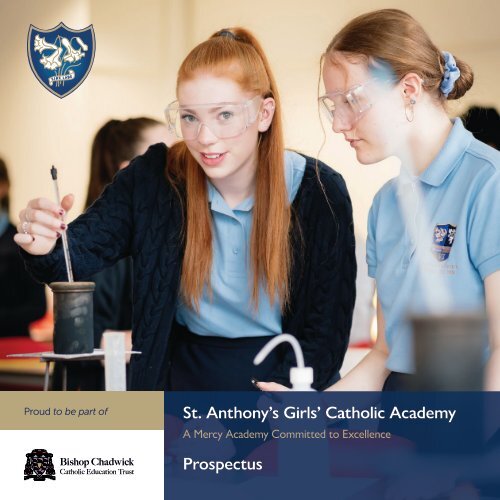 Proud to be part of

A Mercy Academy Committed to Excellence

OUTSTANDING IN ALL FOUR

RE-CONNECTING WITH OUR COMMUNITY? 4

OUTSTANDING IN ALL THREE

Catholic Life of the School

and Schools North East Jobs Board

the community within the City of

Sunderland. It is part of Bishop

The majority of the students are from the Roman

Catholic faith tradition, given the ethos of the school,

but applications are also invited from staff and girls of

other faiths who are happy to learn and work within

a Christian environment and join in all aspects of life

The wide catchment area, which covers the whole

of the City of Sunderland, provides a genuinely

come from very varied backgrounds. Many parents in

neighbouring authorities seek to have their daughters

educated at the academy due to its inclusive nature

and often due to family connections. Sometimes

three or four generations have been educated at the

school since its foundation in 1904.

The school was founded by the

Sisters of Mercy during the 19th

century and has a fundamental

The academy is supported in its work by a Chaplain,

other departments and a Pupil Chaplaincy Team. The

Chaplaincy Office is situated adjacent to the School

Chapel which is the venue for weekly Mass, retreat

events, opportunities for reflection and many smallerscale

All academy buildings have either

been rebuilt or refurbished during the

last ten years with over £20m being

spent in capital investment during this

The school is situated in the centre of Sunderland

within walking distance of train, metro and bus

stations. It is a state of the art school situated within

a garden site in a conservation area. The school

and some brand new buildings.

Students from St. Anthony’s and St. Aidan’s attend an

Outstanding in all three categories

Outstanding in all three OfSTED

Expectations with regard to pupil

behaviour are high and the pastoral

care of pupils is a strength. In the

stated the behaviour of students was

Attendance is routinely 95% and punctuality is excellent

and highly valued. In 2020 the academy received the

Platinum Anti-Bullying Charter Mark having been in

receipt of the Gold Anti-Bullying Charter Mark for

AND ENTRANCE INTO THE

“WORLD OF WORK” OR HIGHER

standards and has a strong

commitment to the delivery of a broad

and balanced curriculum. Over twenty

subjects are offered at GCSE and over

Routinely a small number of the most able students

are offered Oxbridge places and between a fifth and a

quarter of students in the last three years have obtained

places at either Russell Group universities or the most

the last five years. Entry to Higher Education has been

are over one hundred and fifty

groups, and individual meetings, each

week ranging from Ski Club with

an attendance of up to eighty to

small one to one sessions linked to

examination prep. Many girls and

teams perform in sports at local, and

level. There are very high

participation rates in sporting and

during the last three years ranging from voluntary

work in Swaziland, Ecuador and Cambodia to local and

the Leonardo Exhibition at the Winter Gardens and the

Routinely a small number of the most able students

are offered Oxbridge places and between a fifth and a

quarter of students in the last three years have obtained

places at either Russell Group universities or the most

the last five years. Entry to Higher Education has been

Pupils are encouraged to be active citizens and take part

as well as competing in local and national competitions.

The thriving Music department has undertaken many

Highclere and Magdalen College (2012), Venice and

residentials have been undertaken by the PE

numbers of girls ski weekly. A number of Ski Club

and occasionally individuals, or teams, have competed

to Innsbruck (2017), Oetz-Solden Austria and city

Heavenly at Tahoe USA and city visit to San Francisco

to Salzburg (1999), Sugarloaf USA and city visit to

opportunities for girls and staff:

• the school is a British Council International

• the school is an Expert Centre for Global

• the school is a member of the Leading Edge

• the school is a member of the Diocesan

• the school is involved in a National Professional

• the school is a member of Monkwearmouth

• the school is also a member of the Together for

groups at all levels;

• the school is a Partner School of Schools North

East and the Headteacher sits on the Board of

• the school has many international partnerships;

This was written by a student for the opening of our

new facilities by past pupil. The right honourable Lady

and those who built it,

of our young people.

parishioners and all who promote

education in our community.

May this school always be

a home of mercy and goodwill,

so that together we can build

your kingdom of mercy,

A Mercy Academy Committed to Excellence 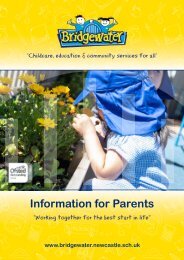