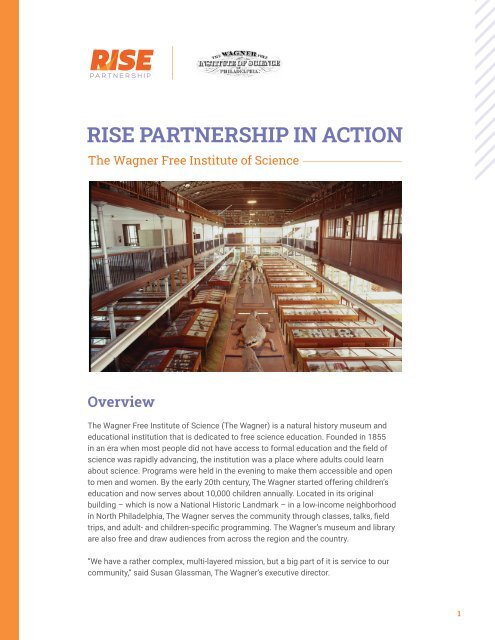 RISE Partnership in Action: The Wagner Free Institute of Science

educational institution that is dedicated to free science education. Founded in 1855

science was rapidly advancing, the institution was a place where adults could learn

about science. Programs were held in the evening to make them accessible and open

to men and women. By the early 20th century, The Wagner started offering children’s

education and now serves about 10,000 children annually. Located in its original

in North Philadelphia, The Wagner serves the community through classes, talks, field

trips, and adult- and children-specific programming. The Wagner’s museum and library

are also free and draw audiences from across the region and the country.

“We have a rather complex, multi-layered mission, but a big part of it is service to our

“ We’ve been thinking for several years about how

we could do a different, more authentic kind of

evaluation. So when we learned about the RISE

opportunity, we jumped on it.

One of the institution’s longest-standing

children’s programs is GeoKids, an

for children in the community. The

offer the program, which consists of

spaces. GeoKids has expanded to

include SNAP (Science Nature Art in

Philadelphia), a similar program for

“It’s really about being place-based

and showing them this natural history

museum is in your neighborhood and

connecting them to nature and science

and empowering them to participate in

of children’s education at The Wagner.

The Wagner is further enhancing its

impact as one of 15 organizations

selected to participate in the RISE

The Wagner’s work with RISE started

evaluations were also developed for

SNAP and some of the adult programs.

The museum always had anecdotal

evidence from students, families, and

community members about the value

of its programs, but working with RISE

“It’s kind of hard to measure impact or

quantify things because we’re not doing

a standardized test so it’s hard to say,

‘what did the kids learn?’” Clark said.

“[RISE] has given us a concrete way to

quantify the outcomes and focus the

outcomes and measure the impacts.”

The institution has long collected data

on program satisfaction, but now has

the tools, language, and questions to

capture what people are learning from

programs. For example, The Wagner

has completely retooled the surveys

given to students in the adult education

classes, asking them for the first time if

the class has had an impact on the way

they understand science, the scientific

“We’ve been thinking for several years

about how we could do a different,

Glassman. “So when we learned about

the RISE opportunity, we jumped on it.”

“ Before RISE, we made surveys, but we didn’t really

make them like we should have; we didn’t consider

Because of the COVID-19 pandemic,

The Wagner was forced to shut its

physical doors and pivot to virtual

with minors, supporting the Philadelphia

Board approval process to allow the

collection of evaluation surveys from

“Before RISE, we made surveys, but we

have; we didn’t consider piloting surveys

or using validated questions, among

Learnings from RISE were also applied

to inform the museum’s reopening

the idea of feedback loops – collecting

feedback and using it to shape and

design programs – and created both a

focus group and survey to understand

This resulted in a careful, targeted, and

“We put the feedback loops to

immediate use in a very practical

targeted in our program design, but

perspectives in how we do it.”

RISE helped develop a culture of

evaluation at The Wagner. Not only did

evaluation move beyond the original

“We’ve engaged with the partners

on a different level and I think that’s

resonated with them, even the kids and

the teachers to be involved in that,” said

Clark. “We realized involving them in

planning early on and getting another

point of view could be really informative

“I think the biggest immediate change

is more voices in the mix in the creation

and the thinking about program ideas

from the beginning, instead of at the

dynamic process of creating the

programs or planning the programs,

even if we’re just refining programs that

Overall, participation in RISE has been a

very positive learning experience for the

“I just want to say that it’s the best

have ever had personally, but also for my

Community is the first convening supported by a network of funders in the region. The Learning Community is a collaborative

New Jersey, and a partnership with YaleEVAL of The Consultation Center at Yale. The Partnership provides nonprofits with

resources and training to strengthen organizational effectiveness and ensure a greater impact on social, economic, health, and

educational conditions in communities, including the effects of racism, intergenerational poverty and trauma.