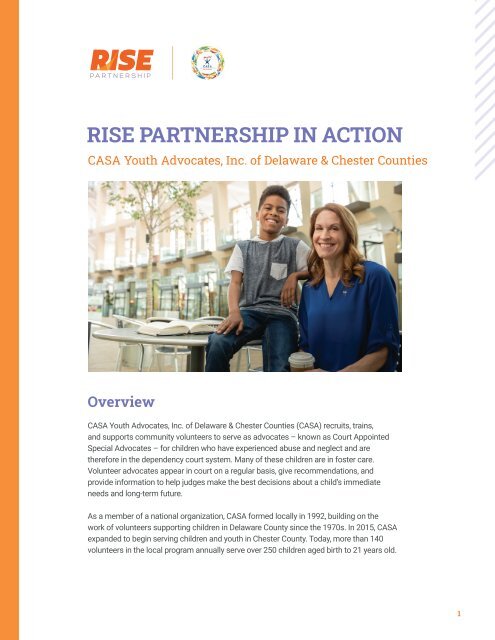 therefore in the dependency court system. Many of these children are in foster care.

Volunteer advocates appear in court on a regular basis, give recommendations, and

As a member of a national organization, CASA formed locally in 1992, building on the

work of volunteers supporting children in Delaware County since the 1970s. In 2015, CASA

expanded to begin serving children and youth in Chester County. Today, more than 140

“[RISE] really helped us take a lot of data that was

Children with an advocate are more likely

in school, and they are half as likely to

CASA is further enhancing its impact

as one of 15 organizations selected

to participate in the RISE Partnership’s

CASA’s work with RISE started with the

development of a logic model, a process

the organization had never gone through

in detail before. After several iterations,

the logic model is now ready to share with

funders and guides internal checks of the

“Not only did we get a logic model on

paper describing the pathway that our

work takes and what it takes to be

impactful and successful in our work,

but going through that process actually

helped us better understand those steps

executive director at CASA. “I inherited

one when I became the executive director

but, looking back now, knowing what I

know about developing logic models, I

wouldn’t even say it was a logic model.”

CASA started to look deeper into its

the data it collects and what should be

“[RISE] really helped us take a lot of data

that was already in some format and look

at it in a way that was meaningful,” said

McKelvey. “And also helped us focus in

on ‘what do we truly need to be tracking

and what is unnecessary’?”

This new approach to data collection

at outcomes by various demographics

vulnerable? Who is most likely to have

the worst outcomes? And who is most

likely to have a difficult journey through

From there, advocacy practices and

interventions could be tailored to better

“We wanted to tailor our advocacy so

that we can do everything we can to

“We’re in the process of really looking at

how we appropriately train people who

are going to become their advocates to

be the best advocate possible.”

“ Not only is it helping us to improve our services

internally, but we used the data we collected by

demographics to propose and launch a task force for

CASA found that children of color,

teenage girls) were the most marginalized

group, with the most time in foster care,

most number of placements, or most

“Really every data point you can think of in

child welfare, their outcomes were worse

than their white counterparts or their male

CASA wasn’t convinced that this data

was unique to their local program, but

rather reflective of a larger problem

in the child welfare system. So the

Children and Youth Services, as well as

and community leaders who work in the

and found similar disparities to CASA.

“Not only is it helping us to improve our

services internally, but we used the data

we collected by demographics to propose

and launch a task force for Delaware

practices scan to learn what other child

welfare programs across the country

were doing to advance equity in their

systems. As a result of the learnings,

CASA advocated to bring a series of

attorneys and case workers. The impact

of RISE extended beyond CASA to the

“We advocated to bring a series of

around diversity, equity, and inclusion,”

at a systemic level and at a countywide

level, the work that we started with RISE

With the help of RISE, CASA

accomplished a lot in three years

– but believes it can do much more.

“I look at it as just the beginning of the

journey and setting us on the right path,”

a long-term journey, but I’m excited about

Community is the first convening supported by a network of funders in the region. The Learning Community is a collaborative

New Jersey, and a partnership with YaleEVAL of The Consultation Center at Yale. The Partnership provides nonprofits with

resources and training to strengthen organizational effectiveness and ensure a greater impact on social, economic, health, and

educational conditions in communities, including the effects of racism, intergenerational poverty and trauma.