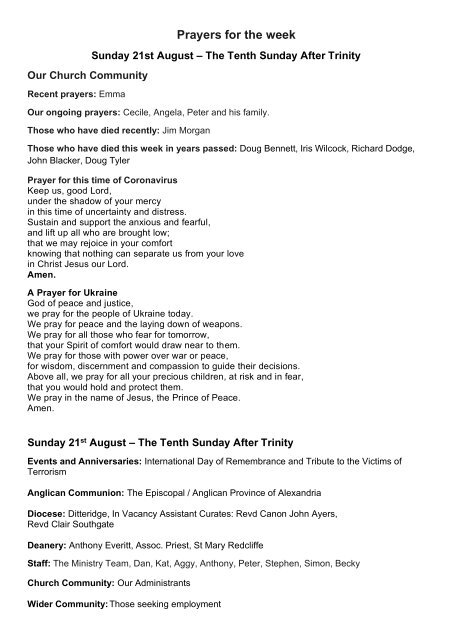 Prayers for the week

Our ongoing prayers: Cecile, Angela, Peter and his family.

Those who have died recently: Jim Morgan

Those who have died this week in years passed: Doug Bennett, Iris Wilcock, Richard Dodge,

Prayer for this time of Coronavirus

under the shadow of your mercy

in this time of uncertainty and distress.

Sustain and support the anxious and fearful,

and lift up all who are brought low;

that we may rejoice in your comfort

knowing that nothing can separate us from your love

in Christ Jesus our Lord.

A Prayer for Ukraine

God of peace and justice,

we pray for the people of Ukraine today.

We pray for peace and the laying down of weapons.

We pray for all those who fear for tomorrow,

that your Spirit of comfort would draw near to them.

We pray for those with power over war or peace,

for wisdom, discernment and compassion to guide their decisions.

Above all, we pray for all your precious children, at risk and in fear,

that you would hold and protect them.

We pray in the name of Jesus, the Prince of Peace.

Events and Anniversaries: International Day of Remembrance and Tribute to the Victims of

Wider local community: All voting for a new Prime Minister

Church community: Our curates and their families

Wider local community: Everyone on holiday

Wider local community: All who pass by on our roads

overshadowed by the kidnapping and deaths of 11 members

of the Israeli team by Palestinian terrorists on 5th September.

paramilitary weapons in Northern Ireland as part of the peace process. The last group to

decommission their weapons was the dissident UDA South East Antrim Brigade, in February

Church community: All who are married in our church

Church Community: Our Readers and Intercessors

Wider Community: All sufferers from Covid and Long Covid 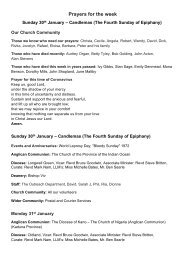 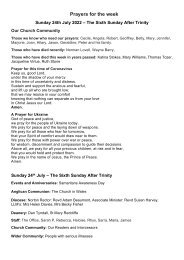 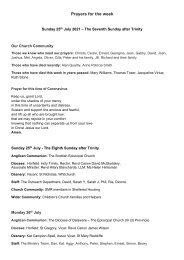 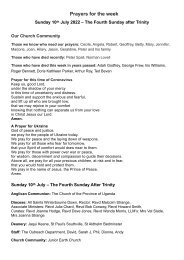 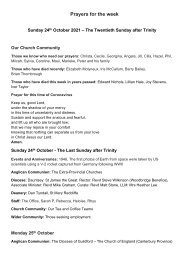 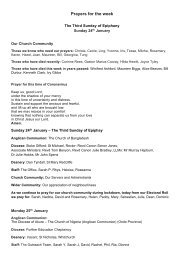 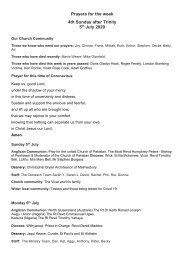