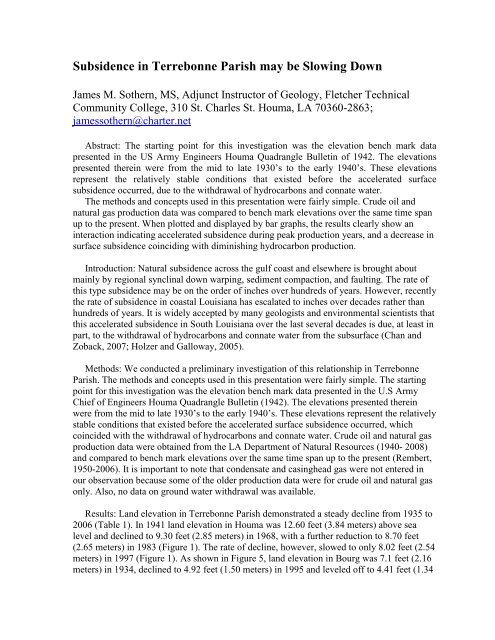 Subsidence in Terrebonne Parish may be Slowing Down - Restore ...

Subsidence in Terrebonne Parish may be Slowing Down - Restore ...

meters) in 2006. A similar pattern was observed in Chauvin (Figure 2), Grand Caillou(Figure 3), and Savoie (Bayou Blue [Figure 4]). Conversely, as demonstrated in Table 2,crude oil production in Terrebonne Parish increased steadily from 5.3 million barrels per year(bbls/yr [842.7 million liters/yr]) in 1940 to 20.5 million bbls/yr (3.3 billion liters/yr) in 1953,peaking at 39.0 million bbls/yr (6.2 billion liters/yr) in 1960. Production declined to 13.0bbls/yr (2.1 billion liters/yr) in 1980 and by 2008 was reduced to only 2.3 bbls/yr (365.7million liters/yr). Natural gas rates of increase and decline were similar (Table 2). Whencompared with pre-existing and present elevations over this same period, there appears to bea reduction in the rate of subsidence that correlates with the diminishing rate of crude oil andnatural gas production in Terrebonne Parish (Figures 1-5).The subsidence induced by hydrocarbon and groundwater withdrawal appears to beapproximately three feet (0.914 meters) over the past sixty years in Terrebonne Parish (Table1, Figures 1-5). When compared with pre-existing and present elevations over this sameperiod, there appears to be a reduction in the rate of subsidence that correlates with thediminishing rate of crude oil and natural gas production in Terrebonne Parish (Figures 1-5).Results show an interaction indicating accelerated subsidence during peak production years,and a decrease in surface subsidence coinciding with diminishing hydro carbon production.Conclusion: This preliminary investigation suggests that land subsidence in TerrebonneParish may be inversely related to oil and natural gas production. However, more data isneeded to determine whether this is a statistically significant relationship. Regardless, landsubsidence in Terrebonne Parish over the past decade appears to be slowing down.Therefore, it follows that these events will give impetus for funding and implementation forcoastal and wetlands restoration.Acknowledgements:Robert R. Wright, retired Civil Engineer and Land Surveyor, and his wife Ruth allowed meto browse around in the building housing years of documents, books and map collectionswhere I came across the U.S. Army Engineers bulletin listed above. They graciously allowedme to borrow the bulletin for the duration of my research.Kenneth L. Rembert, Land Surveyor, helped me to locate more recent elevation benchmarksat or near the older ones listed in the above U.S. Army Bulletin.Melinda S. Sothern, PhD. CEP, Louisiana State University Health Sciences Center, School ofPublic Health. Melinda (my daughter) produced all of the bar and line graphs in thispresentation.References:Chan, A., and Zoback, M. 2007, The role of hydrocarbon production on land subsidence andfault reactivation in the Louisiana coastal zone. Journal of Coastal Research, v. 23, no. 4,p.771-786.Holzer, T., and Galloway, D. 2005, Impacts of land subsidence caused by withdrawal ofunderground fluids in the United States. In Ehlen, J., Haneberg, W.C., and Larson, R.A., eds.,

Magazine: Subsidence in Terrebonne Parish may be Slowing Down - Restore ...