A staple for the Rams Football program for many years, Brett Cummings addresses the varsity team during recent football action.

A graduate of Belding High School,

Cummings was a gifted athlete where he

was a member of the “Team of Destiny,”

named due to a long string of playoff

recognized by the MHSAA for 85 career

those coming in a single season.

His talent on the gridiron earned him

a football scholarship to the University

of Michigan. While there, he played in a

Rose Bowl game, with two of his teams

degree in Kinesiology, majoring in physical

education instruction. He earned a

with an emphasis on strength

and conditioning, leading him to his

current position in the school system.

“Brent checks all the boxes,” says

Shibler. “He is an educator first, which

is a prerequisite for this position. Add

to that his history with Rockford, his

understanding of our culture, and his

achievements. He is a great fit.”

As for Cummings, he is eager and

“I am extremely excited to be named

the head football coach for our Rockford

“I look forward to working in my

leadership role and finding ways to

serve our current players and coaches.

Our coaches are ready to collaborate together

to put our plan in action. We have

all been blessed to serve as assistants

under Ralph (Munger) and fully understand

the time and dedication it takes

to build a successful program. There is

a lot of excitement within our football

to take on this next season together as a

Cummings Takes Over Reinsas Rams Head Football CoachJEANNIE GREGORYROAR EditorThe very second former legendaryRams varsity football head coach RalphMunger announced his retirement after28 years at the helm, there was speculationon whom would earn the position.The date was Friday, Dec. 13, and therewas plenty of surprise from Ram Nationto the announcement. The RockfordPublic School Administration quietedall the talk just six weeks later with apress release dated Thursday, Jan. 23.Rams assistant coach Brent Cummingswas named as the next head coach tolead the football program’s Team 108 inthe fall of 2020.“With the recent retirement of longstandingvarsity head football coachRalph Munger, Rockford Public Schoolsbegan the formidable task of findinga new head football coach. These werebig shoes to fill after the exceptionalsuccess of the program under Munger’sleadership over the past 28 seasons,” therelease states.Big shoes, indeed, with Mungerearning a career record of 335-109, thesixth-winningest coach in Michigan history.He led the Rams to three Division1 MHSAA State Championships whilesetting a record of 25 consecutive playoffappearances.A committee was formed, and theynarrowed the field down to four, conductinginterviews with the candidates.The committee then submitted theirrecommendation of Brent Cummings toSuperintendent Dr. Michael Shibler.The news seemed to please many inRam Nation. Cummings is well-knownand respected not only in the footballprogram and Rams athletics, but in theRockford community.Cummings was the current strength& conditioning and running backscoach for the football program. Heknows a great deal about the program,having performed numerous coachingroles for 10 years. In the past, hehas served as defensive line coach anddefensive backs coach, showing experienceon both sides of the ball as a leader.Newly appointed Rams football head coach Brent Cummings says he’s excited to leadthe Rockford Football program. ~ Photo by Connie Hill10 ROAR MAGAZINE FEBRUARY, 2020

A staple for the Rams Football program for many years, Brett Cummings addresses the varsity team during recent football action.~ Photo by Connie HillA graduate of Belding High School,Cummings was a gifted athlete where hewas a member of the “Team of Destiny,”named due to a long string of playoffsuccesses from 1993 to 1999. That includedtwo state titles, six semifinals and fourstate finals appearances. Cummings wasrecognized by the MHSAA for 85 careertouchdowns from 1995-98, with 38 ofthose coming in a single season.His talent on the gridiron earned hima football scholarship to the Universityof Michigan. While there, he played in aRose Bowl game, with two of his teamsearning Big Ten Conference championships.A gifted athlete, he also ran trackthere from 2002-04. He graduated with adegree in Kinesiology, majoring in physicaleducation instruction. He earned amaster’s degree in coaching sport performancewith an emphasis on strengthand conditioning, leading him to hiscurrent position in the school system.“Brent checks all the boxes,” saysShibler. “He is an educator first, whichis a prerequisite for this position. Addto that his history with Rockford, hisunderstanding of our culture, and hisoutstanding personal and professionalachievements. He is a great fit.”As for Cummings, he is eager andready to lead Team 108.“I am extremely excited to be namedthe head football coach for our RockfordFootball program,” shares Cummings.“I look forward to working in myleadership role and finding ways toserve our current players and coaches.Our coaches are ready to collaborate togetherto put our plan in action. We haveall been blessed to serve as assistantsunder Ralph (Munger) and fully understandthe time and dedication it takesto build a successful program. There isa lot of excitement within our footballprogram right now and we cannot waitto take on this next season together as acollective unit.”FEBRUARY, 2020 ROCKFORDROAR.COM 11 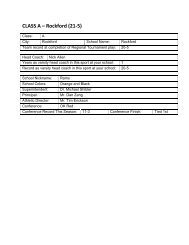