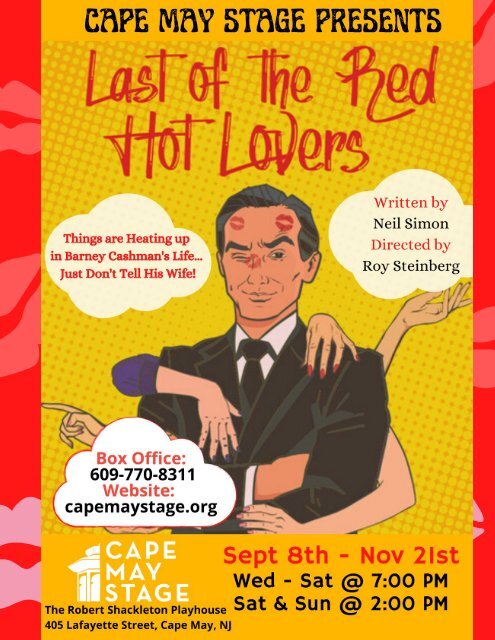 the age of 88 at his home in Key Largo, Florida.

publishing “Playbill” for decades. He was a member of our Producers Circle

and his talented wife, Joan, donated her artwork for sale at our box office.

“May his memory be a blessing” is a phrase from the Jewish tradition.

His memory brings a smile of gratitude even as we mourn his loss.

“I loved Arthur Birsh for his taste and wit. He could be irascible at times but

never failed to tell the truth. His support of my work was one of my

treasured honors. He was my mentor as a producer and businessman. I

loved his jokes – particularly the off-color ones. We shared a love for the

theatre and good food and poetry. I will miss him and feel blessed to have

Welcome to Cape May Stage's 2021 Season!

“Idleness gives one the

mood in which to write,

After months of quarantines and idleness for many, one could predict a

plethora of new writings if Mr. Wilde’s musings have any merit. Indeed,

them may be mounted in the future.

As we enter back with caution for this 2021 season, we pay homage to

the social justice personified by Ann Richards in “Ann”, seek solace in

a new play called “Adopt A Sailor – the Holiday Edition”.

Live theatre is a hot medium. After countless hours of staring at video

screens for zoom meetings and virtual plays that have a cool quality,

and your neighbors in a collective response is a treasure.

ANN is an intimate, no-holds-barred

portrait of Ann Richards, the legendary

late Governor of Texas. This inspiring

and hilarious play brings us face to face

with a complex, colorful, and

captivating character bigger than the

state from which she hailed.

Last of the Red Hot Lovers

the sexual revolution before

A successful and artistic

sailor" during the holidays &

have their lives changed

Please note the following guidelines from

Patrons will be required to wear masks

No visitors will be allowed backstage.

Thank you for following these

our theater to be re-opened!

*Member of Actors’ Equity Association, the Union of Professional Actors and Stage Managers in the United States.

+Member of Society of Stage Directors and Choreographers

He fell out of a

One should never make one’s debut with a scandal.

should reserve that to give an interest to one’s old age.

When my Aunt Molly invited me to her 90th birthday party, the invitation read “please come to my

gentleman friend who doesn’t know how old I am”.

From the earliest recorded comedies, the central theme in comedy has been sexual infidelity or the

withholding of sex as in Aristophanes’ “Lysistrata” (411 BC) or the Roman comedies of Plautus,

Terence, Seneca, the Younger or Livius Andronicus. How does that play through the twenty-first

century lens of the “Me Too Movement” and the redefining of gender and gender roles?

Despite the fact that you’ll never hear the word “binary” or “empowerment” in this play, I find the

text amazingly current. The affair that Barney aspires to is less about sex and more to do with

point that it is no longer surprising. Why do people behave in a way that is hurtful to someone they

supposedly love? What are they looking for?

This production uses two comic actors at the top of their game to answer that question. We have the

and over again. Finally, he decides that his wife is the woman he wants in his secret fantasy room.

Neil Simon writes with wisdom and compassion. His brilliance derives from drawing characters based

on human weakness that informed the work of Shakespeare, Moliere and the lazzi of commedia del

After a year and a half of shuttering our doors, we could all use a communal laugh. It is said that

back and creates distance – we celebrate the dichotomy of distance bringing us closer together.

Last of the Red Hot Lovers

The Otto and Phoebe Haas Stage

There will be two ten minute intermissions

Special Thanks to: Out of the Past Antiques

+Member of Society of Stage Directors and Choreographers

The use of any recording device, either audio or video, and the taking of photographs,

either with or without flash, is strictly prohibited. All electronic devices such as beepers,

tablets, cell phones, and watch alarms must be turned off prior to the performance.

Andy Prosky (Barney Cashman) is thrilled to be returning to Cape

May Stage where he has appeared in Social Security, The Glass

Menagerie, Patsy Cline : A Portrait In Song, The Price, and Sylvia. In

The Delacorte Theatre in Titus Andronicus. Off-Broadway his

credits include: Miles To Go at The Green Space and Romeo and

Juliet, Much Ado About Nothing, and The Merchant Of Venice at The

Pearl Theatre. Around the country Mr. Prosky has performed at St

The Park, and others. His TV and film credits include, Fosse/Verdon

on FX, The Path on Hulu, John Adams on HBO, ER and Law And

Habits, A Birders Guide To Everything, Mrs. Doubtfire and Men In

Rita Rehn (Elaine / Bobbi / Jeanette) has appeared in over one

hundred professional plays and musicals all around the USA

including Heisenberg right here at Cape May Stage as well as

dozens of commercials and voice over. TV credits include

Hello World. Much thanks to Bob Johnson for helping me

learn this show and so many others!! Enjoy this look back.

contemporary plays as well as world premieres all over

and Alvin Epstein in The Madwoman of Chaillot at the

Neighborhood Playhouse in New York. As a member of

The Marriage Fool with Lynn Cohen and Farley Granger.

His production of Othello played at the Intar Theatre on

Theatre Row in New York and he directed Joan Copeland

in a new play called Second Summer for the Colleagues

Theatre Company. He was Theatre the Artistic Director of Theatre Matrix in New York and

the John Michael Kohler Arts Center in Wisconsin. He has directed touring

Gentleman. As a Guest Artist he has directed college students throughout our

nation in plays like American Buffalo, Our Town, The Importance of Being Earnest, and

and television including Guiding Light, One Life To Live, Days Of Our Lives, Forensic

Files, and Scandalous Art. He has four Emmy nominations for his work. He directed

Jo Beth Williams in Life In General on strike.tv, which won five Spirit Awards. At

Were Made, This Wonderful Life, The Search for Signs of Intelligent Life in the Universe,

Dead Man’s Cell Phone, Disgraced, Buyer and Cellar, The Tale of the Allergist’s Wife, The

An Actor’s Carol, Heisenberg, Sylvia and most recently Sidekicked. Roy Steinberg has

an MFA from the Yale School of Drama. He also functions as the Producing

Artistic Director. His proudest production is his daughter, Alexa Catherine.

Amy Hadam (Production Stage Manager) is so thrilled to be

back for her fifth-ish season! Past Cape May Stage credits

begin with The Whipping Man in 2016 all the through

Murder For Two: The Holiday Edition in 2019. Amy has also

been the Stage Manager for Dreamcatcher Repertory

Theatre (Summit, theater NJ) since 2013; recent virtual credits with them include

Everything Is Super Great and Holiday Bites, and the most recent in-person

production with them was Be Here Now in early 2020. Other credits

include: 21: The Musical (NYC), Jekyll & Hyde and Spamalot at Surflight

Theatre (Beach Haven, NJ), A Piece of My Heart and Janey Miller's World

and The Further Adventures of Hedda Gabler at The Theater Project

(Maplewood, NJ), and Talking to Westfield and At Liberty Hall at Premiere

Spencer Potter (Set Design) is a Professor of Design and

freelance costume/set designer working between the

credits at Cape May Stage include: Ultimate Christmas

Buyer and Cellar, buyer The Whipping Man, The Search for Signs of Intelligent Life,

credits include: Costumes- The Roads to Home, Die Fledermaus, The Odd

Rain, Noises Off, And Then There Were None, Tons of Money, The Woman in

Black and Steel Magnolias. In the past, Spencer has also worked as Cape

May Stage's Production Manager/Technical Director and as the Resident

lighting, sound, and video projection for live and virtual

(China), in the states at CAC (Cincinnati), Stanford, Jone

Hall (Houston), Hall Woolly Mammoth Theatre (DC), and in New York at The

Chong). Lighting: Waterboy and the Mighty World (Bushwick Starr & The

Leah Nadolski (Props Master) is a graduate from DeSales

University, class of 2017, with her degree in Theatre Tech

and Design with a concentration on set design and props.

Her past productions at Cape May Stage include

The Holiday Edition, The and Ann. She would like to thank her family and

friends for their love and support.

Zach Weeks (He, Him, His) (Lighting Design) is excited to

be designing at Cape May Stage. Zach is a New York based

designer whose designs have been seen all over New York.

Selected credits include Peter and the Starcatcher, Little Shop

of Horrors, You’re are a good man Charlie Brown, The Tempest,

(The New School). Regional Credits include Brigadoon & Love and the Law

(Muhlenberg College), The Producers, Into the Woods, Hairspray, & Legally

Blonde (White Plains PAC). Zach has worked as an Assistant Designer at

to name a few. To learn more about Zach or to see more of his work

undergraduate degree from Otterbein University and her

MFA from Ohio University. Melanie has a wide spanning

career that has included work in both academic and

Manager/Designer at CATCO in Columbus, Ohio, Assistant Professor of

Costume Design at The University of Toledo. Recent work includes:

McCarter Theatre, The Shakespeare Theatre of New Jersey and adjunct

in Hunterdon County, NJ with her husband Tom.

Neil Simon (Playwright) is widely regarded as one of the most successful,

prolific, and performed playwrights in the world. He is also responsible

than any other writer. Awards he has received include the Pulitzer Prize

for Lost In Yonkers, Emmy Awards for The Sid Caesar Show and The Phil

and a special Tony Award For Overall Contribution To The Theatre. His

nominations include Tony Award Nominations for Little Me, Barefoot in the

actors unions. Equity’s mission is to advance, promote, and foster the art of live

theatre as an essential component of our society. Today, Equity represents more

than 40,000 actors, singers, dancers, and stage managers working in hundreds of

theatres across the United States. Equity members are dedicated to working in the

health and pension plans for its members. Through its agreement with Equity, this

employed in this production. AEA is a member of the AFL-CIO and is affiliated

with FIA, an international organization of performing arts unions. For more

Stage Directors and Choreographers Society (SDC) is the theatrical union that

throughout the United States. Our mission is to foster a national community of

professional Stage Directors and Choreographers by protecting the rights, health,

and livelihoods of all our Members.

readings at Cape May Stage are donation

and seating is general admission.

can be made in advance through

office or can be made at the door on the

in Honor of Lee and Jill Bellarmino

In memory of Judith Fiedler

In Honor of Michael Zuckerman

In memory of Michael Rowinski

in honor of Walter Casebeer 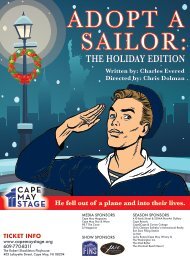 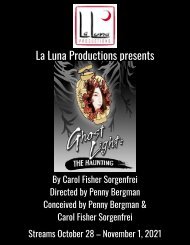 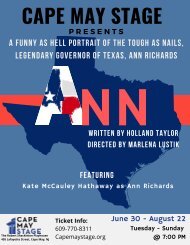 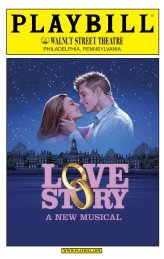 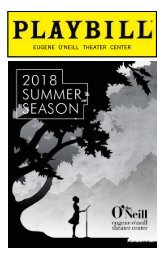 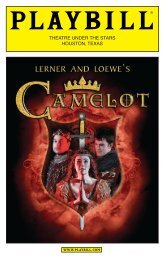 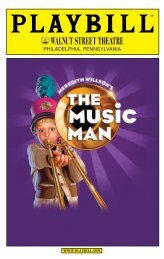 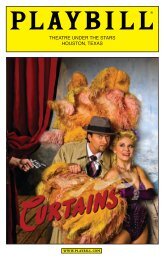 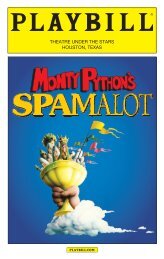 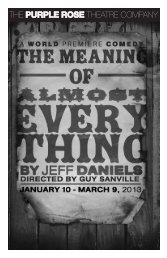 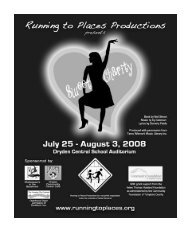 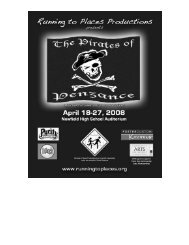 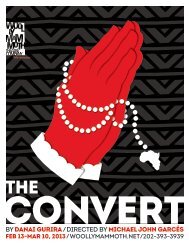 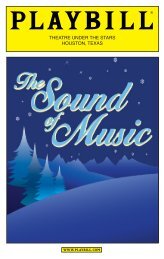 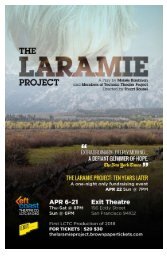 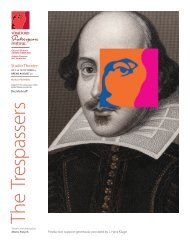