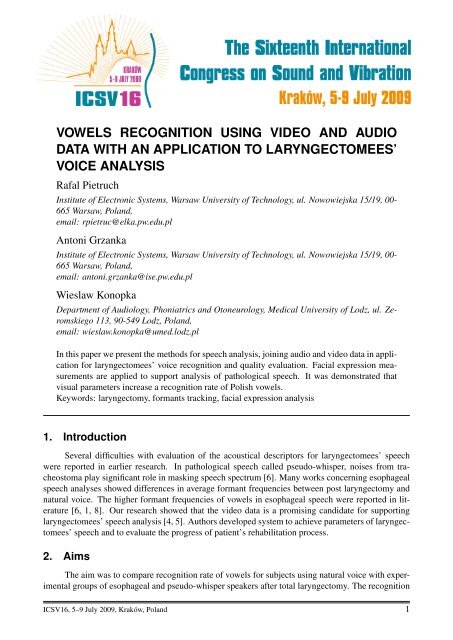 DATA WITH AN APPLICATION TO LARYNGECTOMEES’

In this paper we present the methods for speech analysis, joining audio and video data in application

are applied to support analysis of pathological speech. It was demonstrated that

Several difficulties with evaluation of the acoustical descriptors for laryngectomees’ speech

were reported in earlier research. In pathological speech called pseudo-whisper, noises from tracheostoma

natural voice. The higher formant frequencies of vowels in esophageal speech were reported in literature

[6, 1, 8]. Our research showed that the video data is a promising candidate for supporting

speech and to evaluate the progress of patient’s rehabilitation process.

groups of esophageal and pseudo-whisper speakers after total laryngectomy. The recognition

was made using analysis of acoustical and facial expression parameters.

Presenting system’s platform is Windows XP. Program is based on DirectShow filters technology.

and provides methods for archiving. We implemented automatic face detection algorithm for frontal

parameters including lips shape, compares them with acoustical descriptors and updates vocal tract

model parameters. Neural network simulation and learning were made on Linux platform Ubuntu

In this work we used the model of vocal tract divided into 10 sections of resonance cavities.

We assumed that the palate is closed and the waves don’t pass through the nasal cavity. There is no

energy loss and only reflection effect is taken into consideration. With these assumptions the vocal

[7]. Reversed lattice filter can be then transformed into transversal filter [3], which parameters

algorithm was used to estimate transversal filter LPC coefficients [3]. There is reversed transformation

that from given LPC parameters derives related cross-sectional diameters of vocal tract sections.

first formants F1 and F2 were chosen as the acoustical descriptors in audio recognition system.

In the system with vowel recognition functionality the formant tracking algorithm was implemented.

There was used Christensen algorithm for finding formants candidates from spectrum [2].

All minimums of spectrum second derivative are chosen. For 4kHz bandwidth that was assumed in

In this situation nF − nK formants will be rejected. Function 2 will specify which formants

need to be unassigned. The function can be given using BF matrix where each row represents

candidate and each column represents one of formant (equation 3). This transformation is found

In this situation nK − nF candidates will stay unassigned. There can be one extra candidate

in our situation. We are looking for the function 4 that will assign formant numbers to limited

candidates according to matrix BT F , where columns represents each candidate and each row is

related to formant number. Matrix elements are found according to equation 5.

is minimized according to equation 6.

to their order (equations 7, 8). Then we need to check all combinations min{nF , nK} - elements set

eyes, mouth and nose regions [5]. Following parameters are tracked within the system: distance

between the eyes L0, lips height LH and width LW , distance between line joining the eyes and the

bottom of a jaw LJ. From lips shape the mouth opening area is estimated. Jaw angle and area of

mouth opening were chosen as representatives of facial expression descriptors.

each pixel (with respect to assumed margins) values of 5 features is counted. According to adaptive

thresholds the binarization of 5 regions is made. The thresholds are updated according to region sizes.

• Local, dynamic changes are counted for every pixel (x, y) for n-th sample according to equation

• Horizontal differences for pixel at (x, y) are counted according to Value component (V) using

• Vertical differences for pixel at (x, y) are counted according to V component using equation 12.

The examples of extracted regions are presented on figure 1.

Face shape is extracted from HDIFF and RED regions. Face is the most red region in picture

and from left and right sides it should be horizontal contrast. Face borders are found from assumptions

For every y coordinate:

• the nearest point, beginning from left margin, that fulfils below assumption is chosen:

• the nearest point, beginning from right margin, that fulfils below assumption is chosen:

Example of evaluated face region is given on figure 1(f) indicated by black pixels.

Face elements segmentation is done according to regions sets combination (equation 16). for

Middle points between left and right borders are taken as potential points of face symmetry.

First the line that covers the most of middle points is evaluated using Hough transform. Points that

lays in distance from line greater than defined are removed from set. Face symmetry line is estimated

From face symmetry line we create orthogonal lines between the borders. For every line the

points. The result of described methods is shown on figure 1(h).

regions on both sides of line. Symmetry points of the same parity of symmetrical regions are

regions are taken as nose and mouth candidates, and sets with even numbers of symmetrical regions

are potential eyes regions. Then assumptions of regions relative positions are taken into account, and

symmetrical regions are assigned to mouth, eyes and nose elements. Lips contour is evaluated by

structure was used with two dimensional input vectors. The ’tansig’ transfer function was used in the

first layer of NN and linear transfer function was chosen for output layer. We used mean of squared

according to gradient descent with momentum.

Audio and video parameters were both limited to 2 dimensions. NN was trained to assign

maximum value (1) for output related to spoken vowel and minimum value (-1) to other outputs. In

parameters first layer had 5 neurons and output had 6 neurons. Every output n1:6 was related to each

of 10 laryngeal speakers formed the training set in both cases: NN for visual descriptors (NN-v) and

was formed by men.

age of group Ea was 64 but it differed from Ev group with 4 subjects including one woman. Pseudowhisper

group was not taken into consideration as the extraction of formants in this group failed, as

The neural network parameters were reported in [5]. From audio data we achieved a vowels

In present state the algorithm is sensitive to variable conditions of face (beard, glasses, and

long hair). Video data measurements were supported by operator. No algorithm for extraction of

jaw opening length has been implemented yet in our system. Every result of visual parameter was

compared with subjective, manual measurement made on picture grabbed from related video frame.

speakers as compared with formants analysis [6]. We expect that the further improvement of recognition

analysis. System is easy to extend. In future we are going to analyze real time images from video

Polish vowels transcriptions are given in figure 2.

by laryngectomized subjects. Journal of Speech, Language, and Hearing Research, 44:988–996,

4 R. Pietruch, M. Michalska, W. Konopka, and A. Grzanka. An analysis of face expression images for

8 M. Sisty and B. Weinberg. Formant frequency characteristics of esophageal speech. Journal of