here! What is it you

Turn to p2 for

Column : A word from

celebrating Māngere through sharing its stories

“Great to meet other

people from all cultures

and I love to serve the

are many good things

down the street you

themselves. And so you

and the people in

“We’re all family. We all

know each other. We

all stick up for each

“The people are so

going. My clients are

Centre, have set up this

to provide a platform

for Māngere people to

back to the community. We

hope for this newsletter, and

page, to be the place to

go to see the triumphs and

to get in touch with your

Another aim of this newsletter is to

give organisations and businesses

sponsor. If you want to see your ad

appear in future issues email us

can discuss our sponsorship rates.

donation to help with printing costs

FREE for all kids under 5 years

victory over Fielding High in the National Champs semi-final.

What do you do if you’re playing in the grand

22-nil and the crowd is getting louder and

the character of his team, particularly his

back from such a big deficit to win the title by

“At halftime the girls were still looking quite

nervous and the Onehunga crowd was very

Warm Pasifika Greetings to you all,

to this inaugural newsletter for our community

in Māngere! This is a great initiative for local

news in our community.

As many of you are aware, it’s time for New

Zealand voters to take part in the central

Government election. It is an

important time – and for those

of you who haven’t registered to

vote, do so as soon as you can.

As a voter living in Māngere,

think about your personal

situation and those around you.

Have things improved for you

in the last little while? Or have

your personal matters for your

family and friends worsened? What do you

expect for your family, for your household,

your income, your children and grandchildren?

As an elderly or disabled resident, are your

When choosing a Political Party give thought

to what matters to you most. As Chair of the

vocal,” says Peter. “So I told them they could

either fear it and run or face everything and

Peter says the team have gone through the

season undefeated. “It was a massive day for

us.” The team then went onto the National

Top Four Champs in Palmerston North. In the

semi-final the girls pulled off another miracle

Hamilton Girls High School in the final, but

after losing four crucial players to injury the

Māngere team were unable to take the title.

A word from the Chair: Vote !

Māngere-Otahuhu Local Board, I see a

One major issue to consider, which affects

many in Māngere, is housing. There is a large

housing stock situated here, and we have a

Whoever is the Government

important for our Local Board

that this issue is addressed.

Māngere has a high

and of elderly people living in

our Ward. And this is reflected

in our Draft Māngere-

Otahuhu Local Board Plan and

is among the six key priorities. It's my hope

that the Māngere-Otahuhu Local Board will

continue to highlight the community’s needs,

along with Local Government agencies.

Learning Tongan at Māngere College will not

only enrich students in their culture but now,

thanks to a new initiative, also help them gain

Toa Bloomfield has been teaching Tongan

at the College for the last five years – but it

was only assessed as unit standards. However

the Ministry of Education will now offer new

for this year and Level 3 next year. The new

use their credits from studying Tongan to count

The school launched the new initiative on

September 3 with powhiri and Tongan dance

to see a rise in students signing up for her

be able to see that this now counts towards

Mrs Bloomfield says there are many benefits

for students to study their own language.

Gardening guru Tom has much to share with Māngere

Tom Winchman is a man on a mission - an ecomission

The 74-year-old has been running the

years, with the help of a team of volunteers.

He works tirelessly without pay in the hope

that people will be empowered by learning

key food growing skills. “The price of food is

going to keep going up, so we’re looking at

different ways of growing vegetables, which

Language learners: Toa Bloomfield with some of her students studying towards their NCEA credits.

“It’s amazing how the students respond to

study when it’s related to their culture. We

teach them to be proud of their culture and

values. But I also believe learning in their

mother-tongue can be a step towards them

becoming more successful as there are now

many careers which require being able to

speak more than one language.”

Tom has set up a special demonstration

garden in which he has a large water tank

hooked up to two small solar panels. These

into a gravel-based garden bed and into a

row of pipes. Due to the nutritious water he’s

pumping into these two ‘garden beds’ he has

thriving vegetables of all varieties. Some of the

nutrients in the water come from the two large

“We are so fortunate to have our language

block and it’s making a huge difference to

and Merits achieved from the students

learning Samoan and I believe we’ll see our

Tongan students following in their footsteps.”

eels that are swimming around the tanks. And

a massive worm farm is also a key source of

nutrients for this experimental garden.

cabbage and watercress in the aquaponics

garden beds – all without any top soil. This is

ideal for growing veges in atolls or beside a

Tom says the garden is a service to the

community - both in Māngere and overseas

- and he says many people visit the garden

to learn skills before taking them back to

their homelands in the islands or within New

One such trainee is Samantha Cooper.

She’s been volunteering at the Māngere

“I want to take what I’m learning here to help

my iwi back home,” she says.

Tom is also using the garden to help kids and

those who normally can’t get down and dirty

in a vege patch.

and concreted a section of the garden so

that people in wheelchairs can come and

experience the joy of sowing and reaping a

“I also run workshops to teach people how to

cook different types of veges as many people

don’t know what to do with things like kale or

#1 <strong>Sept</strong>ember <strong>2014</strong> <strong>275</strong> times <strong>275</strong> times Haere mai! Talofa lava, Kia orana, Malo e lelei, Fakaalofa lahi atu, Bula vinaka, Namaste, Malo ni, Halo ola keta, Mauri, Fakatalofa atu. The <strong>275</strong> <strong>Times</strong> is here! What is it you might ask?! It’s your very own community newsletter – just for people living in Māngere and Māngere East. Turn to p2 for more. whats inside: 02 - Southern Cross win 1st XV title Column : A word from the Chair Lydia Sosene 03 celebrating Māngere through sharing its stories - Mangere ˉ College’s new Tongan initiative What I love about Mangere Simi Ma Chee. “Great to meet other people from all cultures and I love to serve the community.” Sailii Segi. “Friendly people. Different cultures. There are many good things in Māngere.” Lillian Ozucargil. “When you walk down the street you see people enjoying themselves. And so you enjoy yourself.” Torcha Wiparata. “I like the schools and the people in Māngere and how people always smile.” Lorettah Tufuga. “We’re all family. We all know each other. We all stick up for each other.” Kayla Rapana. “The people are so friendly and easy going. My clients are all like family. And can’t complain about prices in Māngere.” facebook.com/<strong>275</strong>times | <strong>275</strong>times@gmail.com | twitter.com/<strong>275</strong>timesEd I 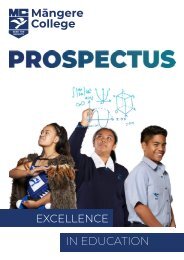 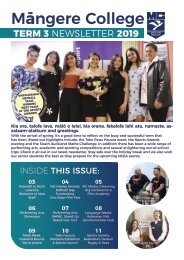 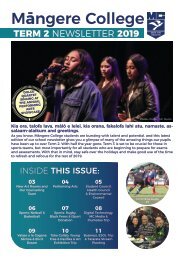 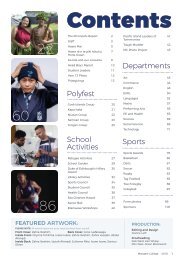 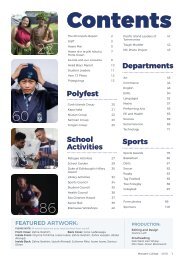 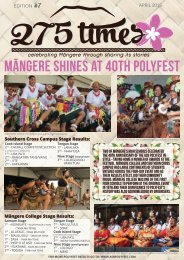 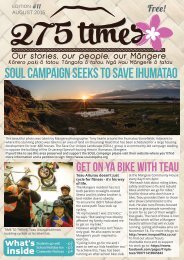 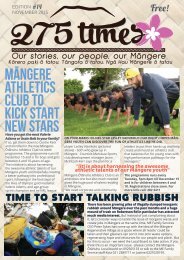 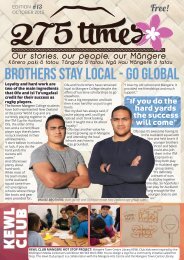