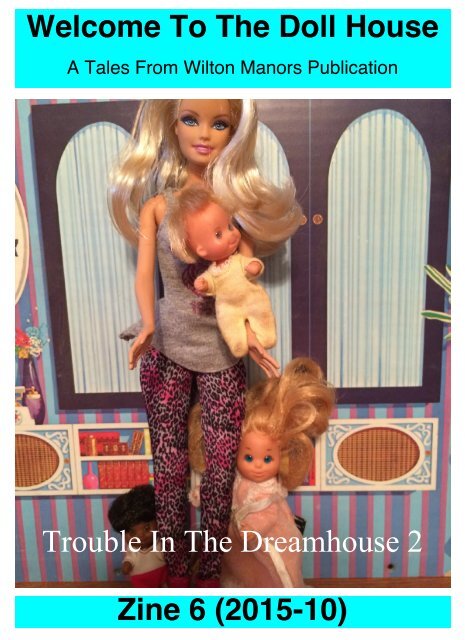 Welcome To The Doll House

A Tales From Wilton Manors Publication

Trouble In The Dreamhouse 2

I’ll Make You A Sandwich All Right (Part 2)

remains. Barbie snaps out of her reverie when she

hears the chirp of the doorbell. It’s Skipper.

“What the fuck, Barbie”, she asks. A cigarette dangles

from her lips, as a toddler clings to her legs. Behind

“I said stop it dammit”, she exclaims.

Barbie opens the door a little wider to let the brood

“I just couldn’t do it anymore, Skip.”

douche bag. No one ever listens to Skipper though. If

there was a Ph. D. in picking shitty men you know I’d

have one from an Ivy League, sis.”

They walk into the kitchen. Barbie sighs heavily as

Skipper nudges Ken’s foot with the toe of her super

“Well you certainly did a number on him. Hey, I

know who you can call. Dougie quit cutting your

about. She takes a smoke from Skipper’s pack.

“It’s been a long time. Do you really think he would

“Girl, that boy loves you like a fat kid loves cake. Of

Skipper stamps out her cigarette into Ken’s palm.

“I’ll make the call,” Skipper says as she retrieves the

older kids and makes to work rolling Ken’s body up

in one of the pretty, pink rugs.

“No. I’ll call him.” Barbie scrunches up her pretty,

plastic nose as she reaches for her phone. Barbie’s

world is about to get a whole lot dirtier.

Barbie scrubs at the walls and floors where Ken’s

“Hey, Skip? Could you get that,” Barbie yells from the

After a few moments she senses a presence in the

room. She looks up. Her breath catches in her throat.

Convicted of war crimes, the leader of the infamous

mercenary group, G.I. Joe, has been in prison for the

last five years. Barbie met Ken while he was in lock

up, and she never looked back. Little did Barbie

know, she had picked the greater of two evils.

Barbie, Skipper, and Duke sit in Barbie’s, once again,

Duke pretender to not notice, well, each other

noticing the other. Skipper chain-­‐smokes.

“Bastard had what was coming to him.”

“It’s not pretty on the inside, Barbie,” Duke looks at

“I guess it’s settled then.”

Barbie is going on the run.

It’s early. Barbie sits at the table. She glances around

at her perfect Malibu dream house. Tears run down

Duke clears his throat as he enters the kitchen. “Are

for Color/Print Version of

our Zines plus Extras:

1. Valley of The Barbies

2. The Adventures at Toxic

Beach (Attack of the Killer

3. The Rhythm of Youth 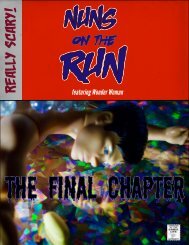 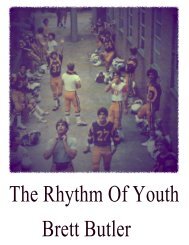 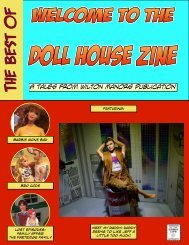 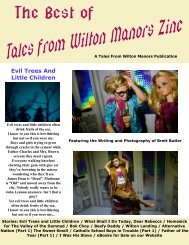 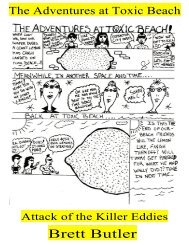 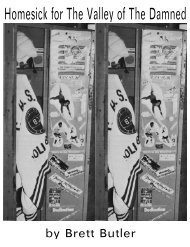 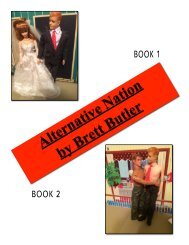 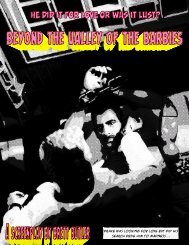 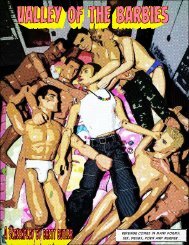 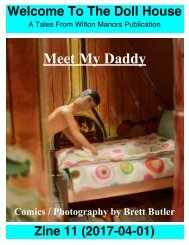 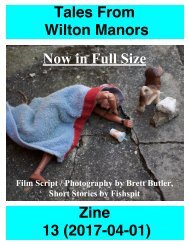 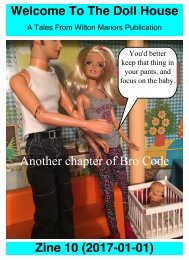 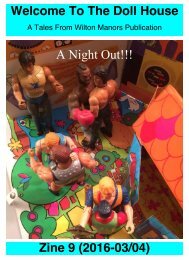 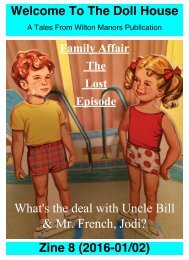