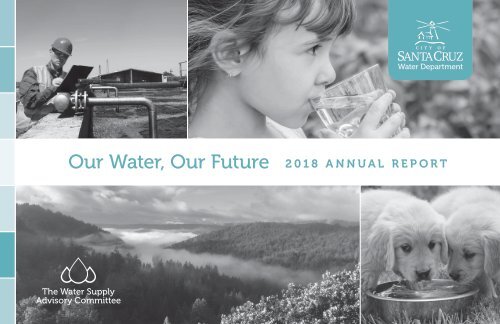 Our Water, Our Future

2018 was a productive year of work on

It’s been three years since the Santa Cruz City

by the Water Supply Advisory Committee

(WSAC) to help ensure that our water supply

significant progress was made on the

Live Oak residents who were appointed by

the City Council in 2014 to address the City’s

months and did a deep technical dive into the

water supply gap that needs to be filled, and

made several recommendations for potential

ways to meet the gap.

At the end of their process, the WSAC

recommended that along with increased water

conservation, the City explore the following

1 I Explore sharing water with other

2 I Store available winter water in

3 I Use purified recycled water and

The WSAC also recommended that the

Water Department study the feasibility of

all recommendations at the same time, so

that by 2020 a fully informed decision can

be made on which recommendation(s) to

implement. This report will update you on

the progress that was made in 2018 to

Reduce demand by an additional

Even with projected growth,

water use is expected to remain

flat due to price, conservation,

and new plumbing and

As a precautionary measure resulting

from the low rainfall and runoff in

restrictions were imposed during the dry

season of 2018. The following activities

were undertaken to further goals for

• Continued to offer a robust suite of

landscape budgets and others.

customers. The water reports will

provide a comparison of the customer’s

usage pattern to that of similar efficient

households. This program is scheduled

• Finished a pilot project to identify

and recover leaks through advanced

water meter technology with a group

• Completed a study of advanced water

This study looked at appropriate

technologies as well as the costs and

• Reached the milestone of more than

to customers since the program began

• Continued to improve upon the large

technology for customers to view

site maps and suggest edits to their

per capita at 48 gallons per person per

day (among the lowest levels

• Improved the accuracy of our annual

demonstrates a declining trend in

known as In Lieu).

Valley Water District so that they

could potentially rest their wells,

help the aquifers recover and

effectively store water for use by

of aquifers provides water from

another source in lieu of drawing

water from an aquifer, so the

aquifer can rest and recharge.

Ninety-five percent of Santa Cruz’s water supply is surface water, from creeks and

aquifers. The chemistry of surface water and groundwater is different, and may

require different treatment. After two years of analysis to confirm the compatibility of

water-sharing project began on December 3, 2018. During the pilot, water quality and

groundwater levels where water is no longer being drawn from will be studied.

You can think of water exchanges/in-lieu as “banking” water for use in the future.

to rest and recharge with water. Then, during dry times when surface water is in short

supply, water supply may be drawn from recharged aquifers.

from the City’s flowing water

Storage and Recovery or ASR).

Use existing infrastructure such

as wells and pipelines, as well

as create new infrastructure, to

aquifers that can then be used

The average cost to replace a

Santa Cruz has over 300 miles of

pipes in the system.

Much progress was made on ASR in 2018. Most significantly, an initial set of

groundwater modeling scenarios for the Santa Margarita and Mid-County

groundwater basins were completed, helping to direct ASR efforts to areas where

they might have the most positive impacts on the basins.

Based on the positive results of the modeling, the decision was made to proceed

to Phase 2 of the ASR feasibility study for the Mid-County Groundwater Basin.

wellsite, as well as permitting and pilot testing. Pilot testing in the Mid-County Basin

begins in early 2019, while identifying a pilot test location in the Santa Margarita

water to supplement or

replace supply in the event the

prove insufficient to meet the

or yield goals of the WSAC

recommendations plan. In the

water does not meet the needs,

(Element 3) with the intention that, following feasibility-level work, just one would

At the November 27, 2018, City Council meeting, the Council supported staff and the

forward as the preferred supplemental supply alternative over desalination. As part

of the Council’s action, staff was authorized to evaluate an expansion of the City’s

to a tertiary level is suitable for irrigation and other outdoor supply needs), as well

supplement the City’s water supply. Advanced treatment can be used to achieve a

variety of desired water quality levels, from near drinking water to irrigation.

Staff is developing work plans to support the Council directives.

members at the celebratory in-lieu

Fast Facts about the Water Department

(As far as Santa Cruz

year’s worth of drinking water

The Water Commission meets on the first Monday of

every month and the public is encouraged to attend.

Meetings are at 7 pm and typically held in City Council

confirm the location and preview the agenda.

A joint meeting of the Water Commission and the City

Council will be held on April 23 to update the Council

on progress made on the WSAC recommendations.

The meeting will be at 7 pm in City Council Chambers –