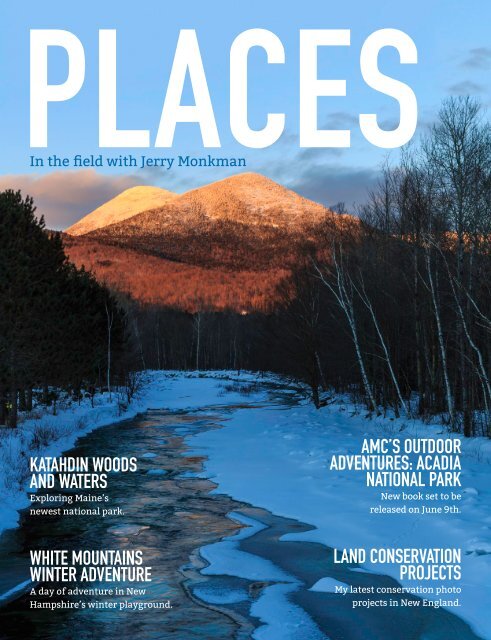 In the field with Jerry Monkman

New book set to be

A day of adventure in New

Spring is doing its best to get started up here in northern New England, and I’m excited

to get moving on some new projects for 2017, which include photographing several land

But like the snow still clinging to the high country, much of this issue of Places has

I may be a little slow to join in on fads, but I recently added a drone to my collection of

my conservation photo projects. You can see some old-school aerials that I shot from

a Cessna late last summer for The Conservation Fund in the story starting on page 18.

Monument in northern Maine. I was excited to explore a portion of the park on skis in

February as some friends and I took advantage of one of the park’s (free!) backcountry

cabins. Photos from this visit and others I’ve made to the park are on pages 4 – 9.

The rest of Places takes you on winter adventures, to Acadia National Park, and to some

A day of adventure in New Hampshire’s winter playground.

New book set to be released on June 9th.

On the Cover: The Percy Peaks in New Hampshire’s Nash Stream State Forest.

and Waters National Monument in

size, the land making up the new park was

donated to the feds by Roxanne Quimby,

who has been acquiring land in the area

for much of the last twenty years. The

for most of Maine’s well-known wildlife

I first explored the area that would

than 4 years ago, while shooting a story

about the International Appalachian

Trail for Down East Magazine. During

my three days of hiking and driving on

another human, but I could see the

recreation potential in the property’s

woods, bald mountaintops, and its

several miles of frontage on the wild East

Branch of the Penobscot River. As soon as

the park was created, I began looking for

some time where I could sneak back up

Above left: Morning light and fog on Mount

Katahdin as seen from the Park Loop Road.

Above right: Jerry on the International

Appalachian Trail in 2012 in what is now part

of the new national monument.

Branch of the Penobscot River.

Haskell Hut is one of two backcountry cabins in Katahdin

Another project brought me near the

park in October and I was able to steal

a morning on the new park loop road,

and that was just the tease I needed to

ski trip to the park in February. Being

a brand new park, there is very little

infrastructure, save for the old logging

roads, some of which were graded into

can tell, the superintendent is currently

the only park employee and there is no

visitor center yet. Thankfully, a group of

volunteers groom about 20 miles of ski

trails and maintain two old cabins in the

park that can be reserved on a first-come,

in the cabins, yet they were super clean,

comfortable, and fully stocked with

firewood, a woodstove, and a propane

cooking stove. We saw the sun for a total

of about five minutes in our three days

in the park and we had to drive six hours

home in a blizzard, but it was a great trip!

Above left: Pulling a sled through fresh powder

between Haskell Hut and Bowlin Camps.

Below left: Skiers outside Haskell Hut.

Right: After sunset on the East Branch of the

Living in northern New England can

mean surviving 4 – 5 months of snow and

cold. Thankfully, we have lots of ways to

enjoy the outdoors in winter, especially

Left: Fat tire biking in the snow at Great Glen

Above right: Winter camping in the White

Below right: Snow covered roads are a

Fat tire biking in the snow at Great Glen Trails in Gorham, NH.

Top: A woman prepares her mountaineering

rope in the White Mountains.

Bottom Left: A couple enjoys a break from fat

Right: A woman running on a snowy day in

New book set to be released on June 9th.

Acadia National Park, so it is exciting that the fourth edition of the book is finally slated

to be released this coming June 9th. Besides having newly updated trail descriptions

and a slew of new photos, the book also has a new name: AMC’s Outdoor Adventures:

I made several trips to the park during the last year, most recently in October and

February. In October I was filmed for a segment about the park on a new PBS series,

Weekends with Yankee, which should begin airing this spring (look for me in episode

#9 “The Islands”.) It was a trip to be on the other side of the camera with Emmy award

winning host, Richard Wiese, as the PBS crew handled all the shooting.

The day after the PBS shoot, I photographed a sunrise hike with some hikers I met at a

local smoothie shop (Thrive on Rodick St. in Bar Harbor – you must check it out!) I’ve had

to finally get it done!

Above right: Hikers watch the sunrise over the

Atlantic from ledges on The Beehive.

the cliffs of The Beehive.

Photos from some of my most recent conservation

Several of my conservation clients had

tract of working forest in northern

Maine that was recently acquired by The

Conservation Fund. This property must

be the flattest one of its size in the whole

state of Maine, so to get a big landscape

perspective, we decided I should shoot

light, and when I arrived at the lake near

Millinocket, where the seaplane I hired

was docked, it was obvious I should let the

pilot drink his second cup of coffee before

take-off. (His grogginess included an

uncertainty about where we were flying

to, so I had to get my map out to suggest

a route for our flight.) He soon perked up,

mounted an iPad with a navigation app

on the plane’s controls, and we were off.

Thirty minutes later, we were over the

property just after sunrise, and we shot

most of the project over the course of

another half hour. It would have taken all

day with a drone to get the same amount

and quality of photos, so hiring a plane

was the right call in this case.

The other projects you see here were shot

for The Open Space Institute, the National

Fish and Wildlife Fund, and the Essex

Above left: Pulling a canoe through low water

on the East Branch of the Penobscot River on a

Above right: Wytipitlock Stream from the air

above the working forest in Reed, Maine.

Bottom right: Dawn on the Mattawamkeag

River as it flows through the Reed Plantation in

Exploring a tributary of the East Branch of the Penobscot River.

Above right: Women paddlers on the Essex

Bottom right: Another aerial of Wytipitlock

Stream as it flows through bogs and forests