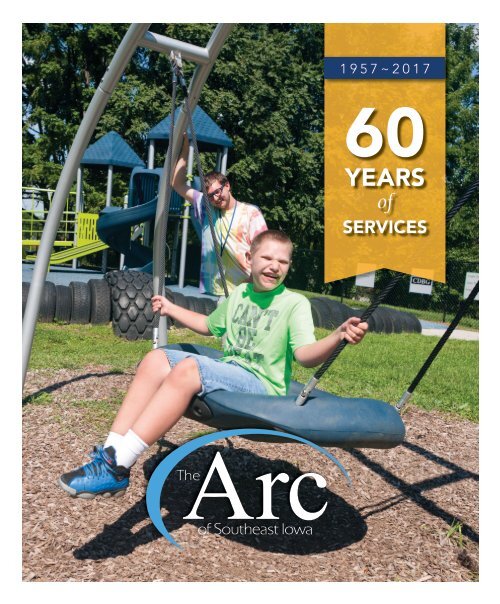 The Arc of Southeast

A cheerful chaos descends on an otherwise typical office building every

you, which is sweet,” Evelyn Maravillo said.

Ms. Maravillo is a direct-care professional for The Arc of Southeast Iowa.

On a recent typical morning, she and her colleagues worked and played with

Celebrating its 60th anniversary this year, The Arc made the renovations

to the Arc of

with the privatization of Medicaid.”

So, the new facility will provide all-day care and activities for clients

with developmental disabilities, from infants to teenagers. Arc clients

can spend their days in the new program rooms and in the outdoor playground,

allowing their parents and siblings to go about their daily routine

“It’s been such a benefit to our family,

to be part of a place like this,” Wendy

at The Arc at least a couple mornings

each week this summer.

Jackson Trom, 20, doesn’t say much, instead

grooving to the music on his mom’s

smart phone as she visits in The Arc lobby.

He’ll spend the morning in one of the

“I can run an errand and not have to multi-task at the same time,” said

Jackson Trom has required medical attention and other services “from

the get-go,” his mother said. Born three months premature, he was diagnosed

with autism and Pervasive Developmental Disorder at the University

of Iowa’s Center for Disabilities and Development (CDD).

He’s received services at his public schools, but as he grew older, The

A product of the

2 THE ARC OF SOUTHEAST IOWA

The Arc provides a wide

the development of the

skills clients such as Jackson

Trom will need to live as

and family members to conduct the

business of everyday life, or just get some

Betsy Reisz said The Arc had to win the

trust of many families when it launched

“’If you could get some relief time, a

couple hours a day, would you use it?’”

and board president in the late 1970s.

“The parents said ‘No.’ They didn’t think

anyone would know how to care for

someone with special needs. We started

a very small respite-care program, and of

course when people tried it, they were

the developmentally disabled to hold

jobs in the community.

Spire, born with Down Syndrome, to

work 20 years in the kitchen at UI Hospitals

An Arc job coach helped her learn how

to schedule her time and navigate her

daily commute on the bus.

“It takes special people to do that,”

“They’re all heroes, as far as I’m concerned.”

part of the family at Shakespeare’s,”

tavern, wrote in an email. Ms.

last year after expanding the kitchen.

She’s since hired another Arc client.

“She is a very hard worker and never

positive, outgoing and brings an energy

“One of the fundamental rights of an

American citizen is the ability to be a part

of the fabric of our country,” said Julie

Christensen, director of the University of

does it say of the value we

place on people with disabilities

when we say, ‘You

the life skills the developmentally

live as independently as

the street, learning to

live in her own apartment.

“They know how to use telephones,

they know how to tell time” with the

IF YOU COULD GET SOME

A DAY, WOULD YOU USE IT?

– Betsy Reisz, early member and board president in the late 1970s

said. “Those are all stumbling blocks

for these kids. They just cover so many

Promoting dignity and growth for people

with disabilities and mental health needs.

The Association for Retarded Children (ARC) is

founded by parents seeking an alternative to

institutionalizing their children with developmental

disabilities. Their focus is on educational, recreational,

The Arc and Iowa City

the Noon Kiwanis of

of Southeast Iowa to

The Arc shifts focus to

services – the only in

the area at the time.

4 THE ARC OF SOUTHEAST IOWA

group homes. SCL allows individuals to remain in their own homes, with the

followed shortly, affording individuals the option of working in community-based

jobs rather than “sheltered” workshops available through Goodwill.

The Arc of Johnson

at camps for various

Name change to The

outside The Arc offices.

added to The Arc’s

services will be offered

WE ARE IN A WEIRD TIME WHEN POLICY AND

POLITICS ARE SO ENMESHED ... WE NEED THE

WHO ARE IN IT FOR THE LONG GAME.

– Julie Christensen, director of the University of Iowa’s University Center for Excellence on Disabilities,

Center for Disabilities and Development.

It all adds up to lifetime options the developmentally

disabled and their families didn’t

“The agency is really focused on keeping

to provide all of those one-to-one services

in all of those areas of the community.”

The growth and development of new services

both reflect and inspired the evolution

in attitudes toward the developmentally

disabled and their capabilities, and society’s

“Every step of the way,” Ms. Reisz recalled.

“People think the government is going

to do it for us, but in the United States it

was the grass roots that forced the government

1972 with Down Syndrome. She joined

The Arc within months

“It’s a real shock when

you have a child (and)

also has Down Syndrome.

for some place for my

child where there were

Even in a relatively

the developmentally disabled and their

families often came down to institutionalization.

Even the Center for Disabilities and

Development was once a residential facility.

“We do the best, with the best of intentions,

with the information we have at the

time,” Ms. Christensen said. “That in itself

was a progressive model at the time: why

not have the individuals closer to the quality

medical care that they need? So, a residential

facility was set up on the grounds of

Kendra Spire in a group home when she

“It broke my heart to leave her the first

week,” she said. So, she began volunteering

“We were all with children with about the

same age and ability levels,” she recalled of

the other Arc families. “I had a job, and I

needed someone to help me with my child.

I had to find some kind of care plan for her.”

6 THE ARC OF SOUTHEAST IOWA

remembered Ms. Reisz, who with other board

“We went to the United Way, and we got

for the respite care program,” she said. “That

was the total amount in our budget, except for

some dues, which wasn’t very much.”

families at any one time with 25 full-time staff

current budget is just under

The Arc services are funded

through waivers, a term that itself

reflects the evolution in how

they’re delivered. Before 1991, state funding was

available only to those living in institutions. In 1991,

parents and caregivers could apply to waive the institutionalization

requirement and deliver services to

“This allowed parents and caregivers to receive assistance

from trained individuals at no cost to them

DeGroot explained in an email.

Waiver services have allowed both dignity and independence

to the recipient and their families as well

as a huge cost savings to the state.

“Right now is a particularly challenging time to be a

Christensen said. “We are in a weird time when policy

and politics are so enmeshed. Even more so now we

need the leadership of organizations like The Arc who

and quality of life through

We are Landscape Architects. We design most everything built outdoors or outside of buildings. Don’t think bushes and backyards. Think big.

AND THE “OUTSIDE” INSIDE CITIES...

perspective supports our role as facilitators of the project vision.

AND ALL OUR PLANS INCLUDE YOU...

We are Planners. We help decide how outdoor spaces are used. To do so, we must consider government regulations, public opinion, eco-geosociological

conditions and site-specific issues. Each factor can be a costly hazard. That fact makes a well-managed, inclusive plan critical. It’s

why we must work smart and together to define, discover and develop plans which add value to a site.

NOTHING GREAT IS ACCOMPLISHED ALONE.

Great results require many people, guided by a managed process and working towards a shared purpose. Confluence is the place where all that

comes together. Here we convert collective input into great outcomes. We convert generic outdoor spaces into exciting, living places. Together,

8 THE ARC OF SOUTHEAST IOWA