Until September prices of propylene and dipropylene glycol have continuously fallen. Since the

beginning of 2019 listing prices decreased of 30% despite of the stable price of propylene oxide.

should increase according to higher crude oil quotations.

Even if there is overcapacity, prices keep stable at their lowest level since the beginning of the

seems to be over. In 2018 Sunvision Sweet invested more than one mio usd for an activated

2018. Quotations are stable at lower level: stocks in China and Europe are slowly decreasing and

production of Ascorbic Acid in June of this year: the new facility outside the city of Shenyang will

be completed by the beginning of 2021. Sodium Ascorbate is regularly available. It is expected

that the company NHU will start production in 2020: it will mean new quantity in the market.

After a decade of moderate economic growth, global growth has clearly slowed down in all

regions in the first semester of 2019. However, most large economies still face limited risk of

recession. So far, the slowdown seemed to be provoked by long-term factors such as stagnant

labour supply and weak productivity growth rather than by a broad decrease in investment.

Labour markets are tight in most major industrialized countries.

tensions in trade and technology sectors, the Brexit-issue). Further to spreading to nationalsecurity

and domestic political issues, trade (and currency) dispute could disadvantage both the

involved parties and the global economy.

With the deterioration of economic growth, the public debt issue could become an urgent

According to the World Bank, global trade growth should fall from 4.1% last year to 2.6%

this year. The weakness in trade has affected mainly capital goods. The current trade disputes

uncertainties and other geopolitical issues impact the global business confidence.

Companies are more hesitant to program large capital expenditure plans. While investment in

construction is strong, investment in equipment and machinery is weaker than last year.

expectations. The economic slowdown was followed by a shift in monetary policies by the world’s

largest central banks toward greater easing. Economic actors are increasingly concerned by the

with full sprinkler coverage of this area

In order to continuously improve safety, in August 2019 ECSA extended the Sprinkler system in

all dedicated areas to the collection and storage of special waste.

and recovery basin for the extinguishing water.

order to reinforce our safety systems.

to an European average percentage of 86%).

> Up to date analysis about the World economic situation

> A quick overview of price trends

GET ME A COPY! 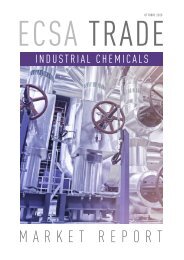 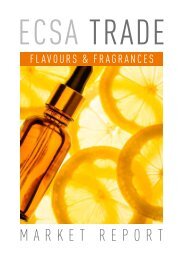 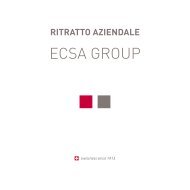 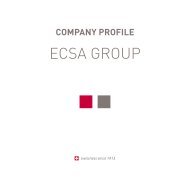 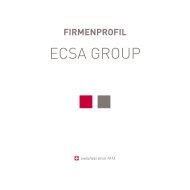