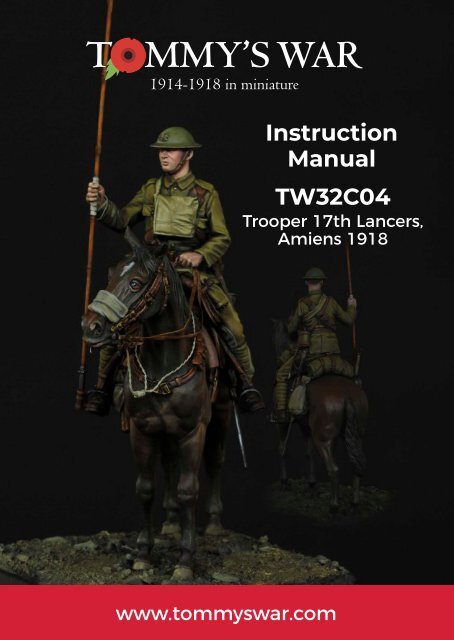 Brigade during the Crimean War and it’s engagement at Ulundi

Cavalry Division in November 1914 for service on the Western Front.

The regiment fought in its conventional cavalry role at the Battle

Cavalry Brigade, part of the 3rd Cavalry Division, in February 1918

and was used as mobile infantry, plugging gaps whenever the need

arose, both as cavalry and as infantry during the last-gasp German

After the signing of the Armistice on 11 November 1918, the

of the Rhine in Cologne.

The regiment then served in County Cork, Ireland, where it operated

during Irish Uprising of 1921, the title of the regiment was altered to

the 17th Lancers (Duke of Cambridge’s Own).

In 1922 the Regiment was amalgamated with the 21st Lancers to

Find the small sprue as the image, the longer piece is the top

section of the lance. Remove from the casting block leaving

Insert the pieces of sprue into the brass tube to test-fit, at this

hand and fit the bottom piece after.

Step 2.1 Fitting the bridle and reins

Fitting the bridle and reins

In 1914 the British army were using a mix of equipment.

The saddle was in the main the 1912 universal pattern

saddle. The bridle and bit were part of the 1902 pattern

equipment. This additional part is shown in the small

photo-etch fret provided with your kit.

The two parts were cleaned-up and placed ready.

I did trim the part to allow a better fit, see the

images of the actual horse , you can see how the